Irene Emery takes care to distinguish between procedural and structural detail when describing the primary fabric structures included in her classification system. (This post is a direct continuation of the previous one, which includes additional information about the source references.) She also separates the core definitions of categorized structures from contextual discussions of selected aspects of their manufacture and application.

Those narratives include statements of Emery’s personal opinion about systematics and terminology in prior literature. Her remarks are more likely to address misunderstandings about knitting than anything related to crochet but she does emphasize the incorrectness of the routine identification of “fabric…as crochet simply because hooked needles were used to construct it.” The defining and differentiating attributes of the two structures are:

Knitting and crochet represent the two major types of interlooping. In knitting the interlooping is vertical and the loops are vertically aligned, each loop securing the corresponding one in the previous row. Crochet is characterized by both vertical and lateral interworking of loops, and each new loop (or the series of loops constituting the new stitch) secures the one before it in the same row.

With allowance for the differences in the way Emery relates closed-loop and open-loop knitting to the parent category of looping (discussed in the preceding post) her remarks about knitted fabric and illustrations of it are consistent with corresponding material in the craft literature. The same cannot be said of the way she treats crochet.

Emery uses familiar UK terminology for crochet stitches, with the exception of the slip stitch or single crochet (synonymous in UK, different in US; she says nothing about the separate glossaries or her departure from them). She terms this a plain crochet, seemingly coopting a term that appeared in the Victorian fancywork press. However, in that context plain basically meant what is now termed front loop only (FLO) and applied to both single and double crochet.

Emery also uses the name “simple stitch” without italics in narrative text and doesn’t indicate if it is a synonym for plain crochet. A description of how the “simple stitch can be elaborated” seems to use it in that sense.

If a second loop is added before a new [simple] stitch is complete, the stitch may be called ‘double,’ if three are made, ‘treble,’ and so on.

The same clarity does not apply to the caption under a photograph of square filet mesh where both the horizontal chains and the treble crochet (UK) vertical separators are described as “Simple crochet stitches combined to form open meshes and solid areas.” 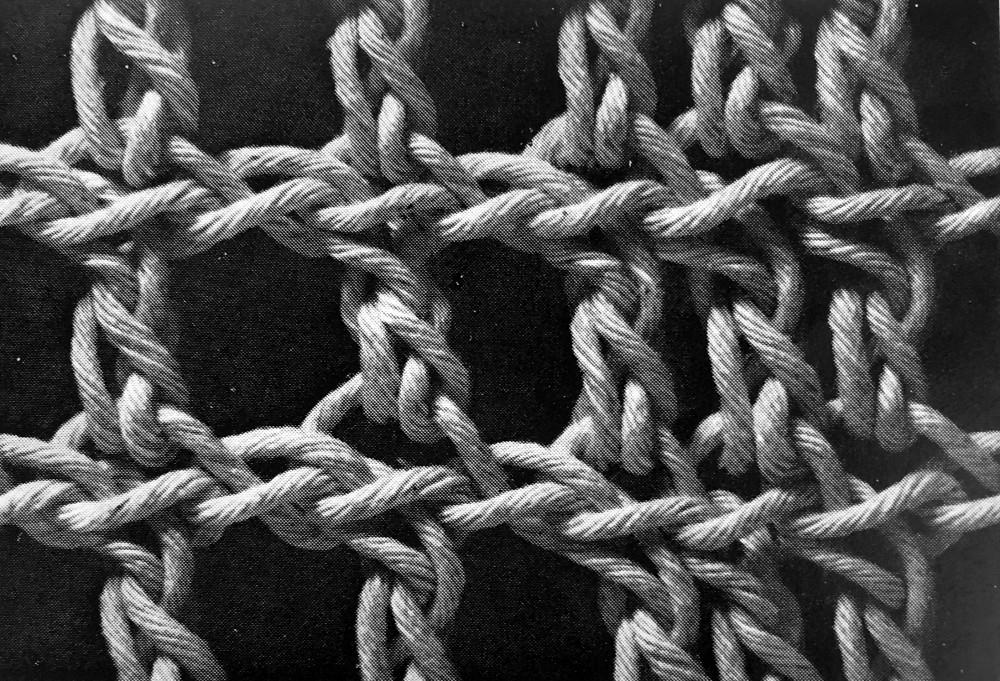 Anyone reading that caption without having studied the narrative text would likely have difficulty understanding the labeling of the stitches. Even at that, if simple and plain are properly read as synonyms, the caption does not correctly describe the treble crochet in the mesh. By Emery’s definition this stitch is made by adding two extra loops to a simple crochet — i.e., slip stitch — before the stitch is completed. This is technically correct but arguably an oversimplification. It is not equivalent to the erroneous caption description of a treble crochet as a combination of simple stitches.

Seiler-Baldinger apparently attempts to disambiguate the terminology by using Emery’s “simple crochet stitch” to designate a chain. However, by Emery’s definition crochet is interworked both laterally and vertically. Since a chain is worked without running anchorage in any adjacent structure, it does not qualify structurally as crochet in itself, even if chains are fundamental elements of crocheted fabric.

Adopting Seiler-Baldinger’s definition, instead, and accepting the chain as crochet would have staggering implications for the history of crochet. Chains are encountered in many other contexts and are counted among the universal constructs that date back to early stages of human invention — devised independently at an indeterminable number of times and places. If a chain is crochet, the craft did not originate in the late-18th-century but in deep prehistory. I don’t believe that Seiler-Baldinger’s intended any such implication. A chain is an “air stitch” in German – Luftmasche – which I suspect was conflated in back-and-forth translation with the German word for slip stitch – Kettenmasche – literally meaning “chain stitch.”

Both authors do use “plain crochet stitch” to designate a slip stitch, which is the smallest structure that meets Emery’s definition. There is nothing to be gained in current discourse by substituting the unfamiliar label plain crochet stitch for the established slip stitch, which has the advantage of being the only label that designates the same stitch in both the UK and US glossaries. However, plain knitting frequently appears in the comparative discussion of textile structures and it is useful to have a corresponding plain crochet.

The series of posts to which the present one belongs has the goal of defining Tunisian crochet in terms that Emery or Seiler-Baldinger might plausibly have used had either of them chosen to cover it. Although this is a potentially intricate hybrid of crochet and knitting, there is a ubiquitous basic form of such fabric that can be compared nominally and structurally to plain crochet and plain knitting.

It was known as “plain tricot” in the Victorian literature, where it was first described in 1858 (in three separate publications), and only contains structural elements that are found in plain crochet or plain knitting. The next post in this series will consider ways of clarifying Emery’s definitions of both crochet and knitting so that they lead more directly to an equivalent statement about the composite fabric structure.

3 thoughts on “Crochet plain and simple”