Back in the days when museums stored information about the objects in their collections in accession ledgers and card catalogs, structured vocabularies and classification systems were essential to the location and retrieval of this documentation. When dealing with manufactured objects, the basic nomenclature normally paralleled that used in the respective craft or industry. The higher-level categories the artifacts were sorted into were primarily intended to meet the needs of collections management and other curatorial activity. The underlying conceptual frameworks were therefore less likely to correspond directly to those of the practitioner communities.

One of the seminal texts in the development of such classification systems for textiles is Les Textiles Anciens du Pérou et leurs Techniques (The Ancient Textiles of Peru and their Techniques) by Raoul d’Harcourt, published in 1934. This was immediately used by Fritz Iklé as a basis for the organization of an exhibition of his own collection, displayed at several locations in Switzerland during 1935. It was titled Primäre textile Techniken (Primary Textile Techniques) and the accompanying booklet includes an essay by Iklé on the way he grouped the objects according to the techniques of their manufacture. He notes the extensibility of the system developed by d’Harcourt, whose personal support he also acknowledges.

Kristin Oppenheim published the Systematik der textilen Techniken der Neukaledonier und Loyalty-Insulaner (Systematics of the Textile Techniques of the New Caledonian and Loyalty Islanders) in 1942. She based this on the categories put forward by Iklé but included additional subgroups. One such extension was a categorical distinction between production methods that work finite lengths of thread, yarn, or comparable material into looped fabric, and those that place no intrinsic restrictions on the length of the working element. This was retained as a fundamental criterion in a series of increasingly comprehensive systems (described here) culminating in one of the current standard works, Textiles: a Classification of Techniques, published in 1994 by Annemarie Seiler-Baldinger.

The category that Seiler-Baldinger labels Mesh Formation with a Continuous Element of Limited Length is typified by an eyed needle pulling a manageable length of yarn by its end through each successive loop in a piece of nalbound fabric, thereby reducing the remaining length of that yarn. The category Mesh Formation with a Continuous Element of Unlimited Length includes knitting and crochet. Here the tools are interposed between the source of the yarn and the fabric, moving the yarn into it loop by loop, from what can then be an arbitrarily large supply.

The dichotomy is labeled with reference to the source of the working element. However, at least with the manual production of looped fabric, that supply is finite in both cases. No matter how long the assemblage is before being worked into fabric, at some point the end of a depleted strand will need to be joined to, or abut, the beginning of a new one. The points of transition can be unrecognizable in the finished fabric. If they are, the presence or lack of an intrinsic limitation on the length of an individual segment will not be reflected in the structure of the object and is therefore not useful as a stand-alone criterion for determining the technique by which it was made.

An inverse concern can be illustrated with the classification of flatwork crochet. Through to the end of the 19th century, and in the case of slip stitch crochet to the present day, the yarn was/is commonly cut at the end of each row and all new rows started with a fresh strand from the same edge of the fabric. Anyone examining a specimen of slip stitch crochet worked in this manner without prior experience in its identification, might easily characterize the fabric by regularly limited lengths of working yarn despite that not being a definitive attribute of the craft.

The appearance of loose yarn ends in objects that are unequivocally slip stitch crochet has, in fact, been taken to indicate that they were nalbound. The basic slip stitch structure can be produced with either method. There are even two ways of doing it with an eyed needle, of which one imposes no constraint on the length of the yarn supply (described here). This type of slip stitch fabric can therefore not be categorized as the product either of a technique of limited element length or of unlimited element length.

There are further examples of slip stitch crochet having been described as nalbinding, to the detriment of the historiography of both crafts. I’ve discussed a few of them in previous posts and will be adding others to a more comprehensive listing. The preceding post discusses the outset of a sequence of publications that led to the realization that the earliest material appearing in the corpus of cross-knit fabric is nalbinding rather than knitting.

It is widely accepted that the body of early artifacts catalogued and described as knitting still contains nalbound material that has yet to be recognized as such, and vice versa. There is also little doubt that more slip stitch crochet remains to be uncovered behind misattribution as both nalbinding and knitting.

Dating the advent of true knitting (a term introduced by d’Harcourt) requires a deeper understanding of the structural and procedural details that differentiate what is sometimes referred to as “single-needle knitting,” and multi-needle knitting in the established sense. Since such detail is not invariably present in archeologically recovered fragments, the need for a logically robust and clearly labeled higher level categorization has been apparent throughout.

The limited and unlimited categories initially articulated by Oppenheim are basically applicable in that context but the imprecision noted above still needs to be addressed. One approach would be to reconceptualize and rename the dichotomy in terms of how the yarn is led along its path, rather than by how long that path can be. Seiler-Baldinger’s definitions of the two groups provide an effective basis for doing precisely that.

In the limited case “the meshes are formed by the leading end of the thread…” In the unlimited one “the new mesh is formed by that portion of the thread nearest to the loop last formed.” The former can be given the compact label “end-led” techniques, with “loop-led” techniques as its binary counterpart. The alternative would be to extend Seiler-Baldinger’s category headings to Mesh Formation with a Continuous Element of Intrinsically Limited Length and Mesh Formation with a Continuous Element of Potentially Unlimited Length but that would do nothing either to streamline the nomenclature or highlight the essential concept.

The distinction between the preparation of a continuous working element of unlimited length before the creation of the fabric commences, and the extension of an element of limited length at repeated intervals during the production of the fabric, retains it utility. Regional schools of what is essentially the same end-led craft vary in whether a large continuous aggregate of fibers is first prepared and shorter lengths cut from it, or the raw fibers are added to the working element as an alternating facet of the fabric’s production. The applied procedure can be undetectable in a finished object and, as noted, the difference between a continuous element of potentially unlimited length and joined elements of limited length can also be invisible. The procedural attributes of how the working element is prepared therefore do not provide a generally applicable basis for the classification of fabric.

The same might be said of reference to end-led and loop-led techniques. However, those labels bypass the ambiguity relating to the working element and are thus one step closer to utility in such things as identification keys. For example, a key for the identification of fabric with a looped structure might include the criterion “open knit stitches appear in the fabric.” If they do, it can only have been produced by a loop-led technique. Oppenheim illustrates this as a “Knit stitch: Typical representative of systems with infinite elements.” 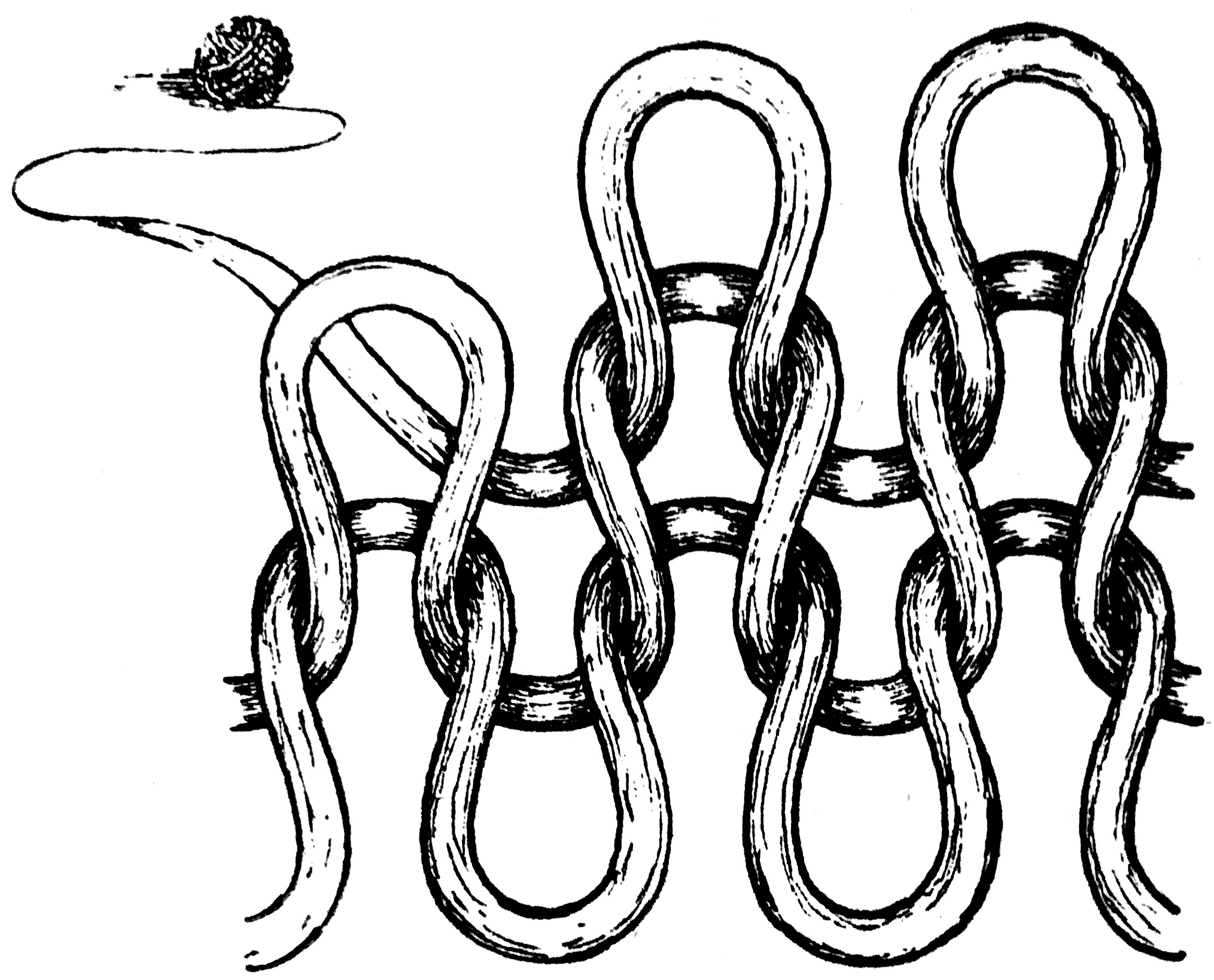 If the question is whether pierced loops appear (also as drawn by Oppenheim) and the answer is affirmative, it can only have been made by an end-led technique. 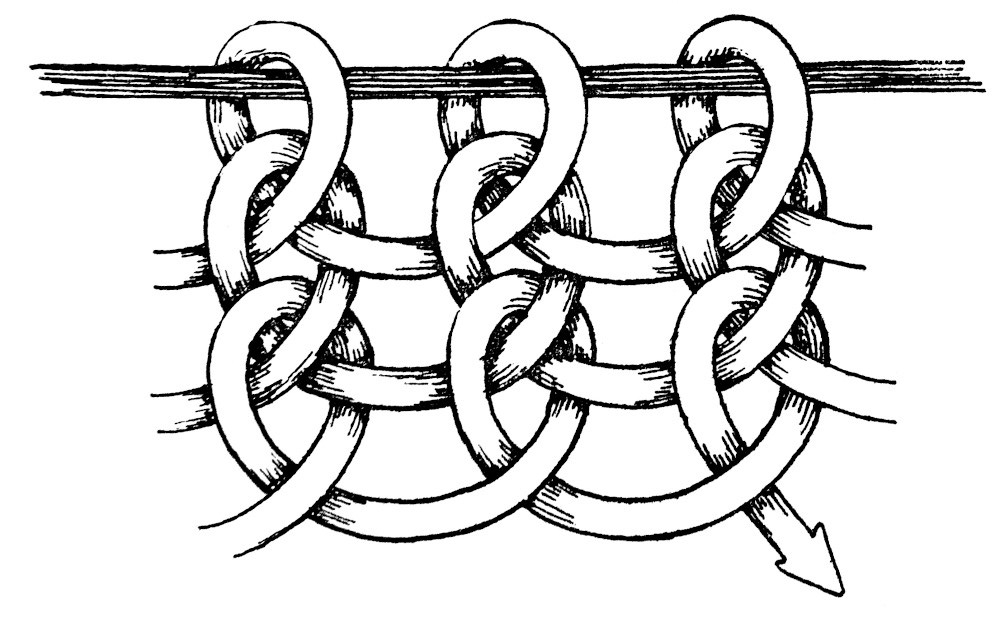 Cross-knit looping can be produced by either technique, shown here as drawn by d’Harcourt. 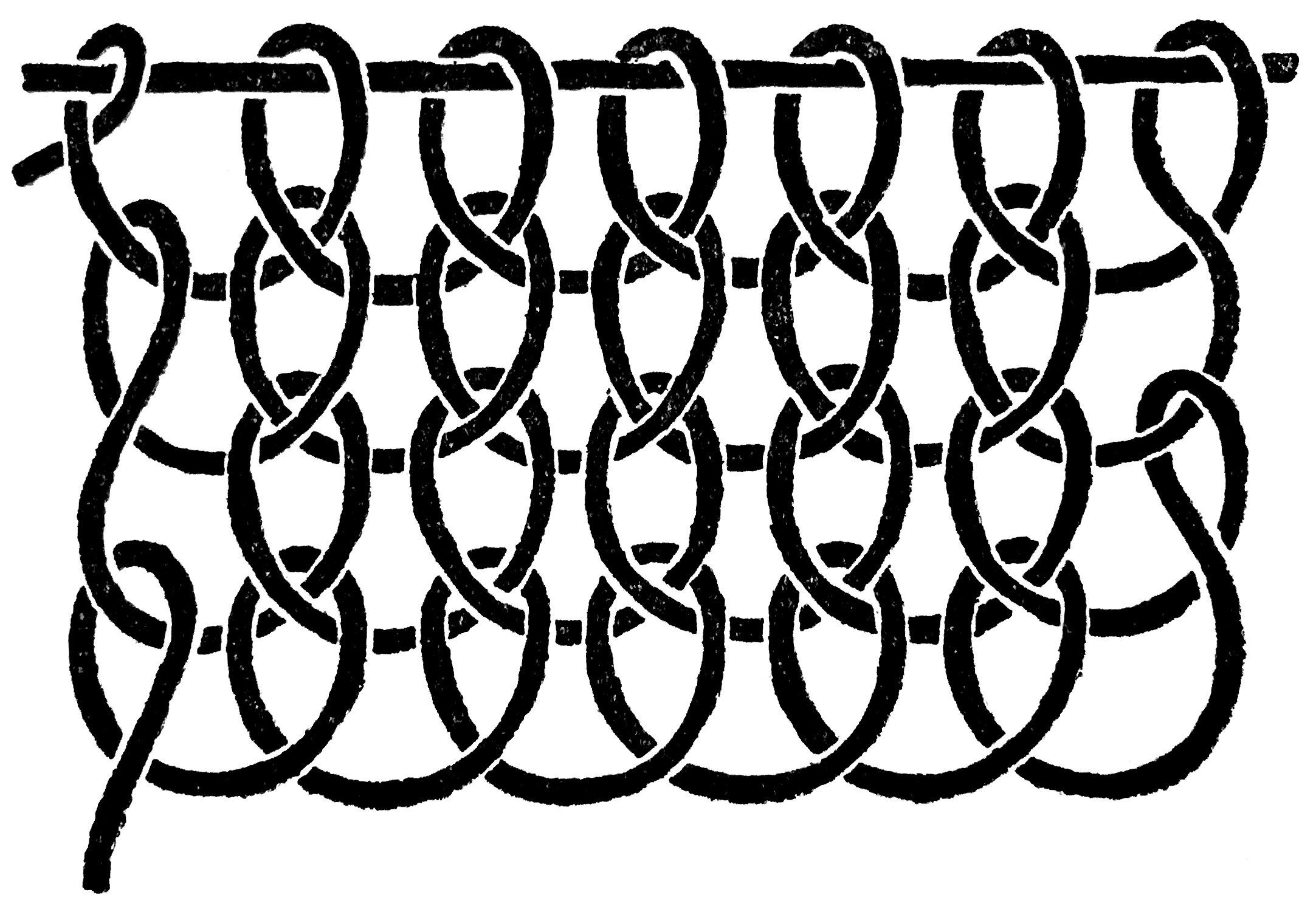 The additional presence of open, pierced, or simple loops in such fabric can eliminate the ambiguity, as the simple loops along the vertical edges do in this illustration. However, the largest amount of older material to which this concern applies is either fragmentary or worked in the round. The selvedges are therefore rarely accessible for examination, assuming they were a component of the fabric to begin with. Additional characteristics specific to the alternative categories may be revealed by the path of the working element through shaped areas of the fabric.

Such attributes can also be included in a binary identification key, with separate branches in the decision tree for more complex looped structures. Once the fabric structure and mode of its production have been identified, further craft-specific yes/no criteria can be applied to the detailed documentation of individual objects (as illustrated for early modern knitting in several articles in issue no. 60 of the Archaeological Textiles Review).

Zeroing in on a specific mode of production will, however, often require external familiarity not just with the candidate tools and techniques, but also with the historical contexts in which they appear. The latter factor is, in turn, informed by the correct attribution of the provenance and structure of material in museum collections.