The inaugural post on this blog appeared five years ago today, and has since been joined by over 130 more. I managed to prepare them with near fortnightly regularity until six months ago, when the preceding post went online. The one initially intended to follow it has yet to be finished and deals with a German gauge system for wire knitting needles.

One of the source documents consulted during its preparation reminded me about the relationship between the drawing of wire for such implements and for musical instruments. Music wire was a central concern in an earlier phase of my museum-based research and the pending post turned my attention back to it. That is also where the blogonym stringbed originated; a term used to designate the planar array of strings on an instrument such as a piano or zither. This all triggered an interest in once again writing about topics more closely related to its literal sense.

END_OF_DOCUMENT_TOKEN_TO_BE_REPLACED

I’ve been diverting a fair amount of time that would otherwise have gone into blogging, to the preparation of a paper for the In the Loop at 10 conference at the University of Southhampton at the end of next week. Its title is Taking a Loupe to the Loop and it reviews some of the topics I’ve covered here, as well as providing fuel for coming posts.

Just as I was beginning to feel that I had the bulk of the work behind me, an article by Claudia Sagona was published on 25 June in the Oxford Journal of Archaeology, titled “Two-Needle Knitting and Cross-Knit Looping: Early Bronze Age Pottery Imprints from Anatolia and the Caucasus.” There is nothing unusual about an archaeological study of textile impressions found on ceramics — such things vastly outnumber prehistoric specimens of worked fiber — but this one claims to have found evidence of open-stitch stockinette knitting significantly earlier than had previously been attested.

That made it obligatory reading for me and it had also caught the attention of others. Its discussion was on the program of the Knitting in Early Modern Europe (KEME) seminar in Copenhagen on 7 July. I wasn’t there but understand that the participants were highly critical of the article’s methodology and conclusions.

I’ll be taking two of the drums that I’ve been beating on this blog with me to England. One calls attention to the limitations of our ability to identify the tools and techniques used to produce a piece of looped fabric on the basis of the object itself — a concern that only increases when assessing an impression of its surface detail. The second one signals that the earliest known specimens of knitted (as opposed to cross-knit looped) fabric have an open-loop structure, and not the twisted stitches that are frequently said to be the initial form.

Assuming that Sagona has plausibly identified similarities between the structures imprinted on the pottery fragments and those that could be left by looped textiles, it does not follow that that is how they were made. Her further association of those impressions with specific production techniques is entirely unsupported. She doesn’t explain why the fabric in the open-knit impressions would have been made with two knitting needles. The same structure can be made on a peg loom, which other authors have suggested was the first implement used for that purpose, to say nothing of other methods that may have been known six thousand years ago that we have yet to recognize. Similarly, the basic structure of cross-knit looping is identical to that of twisted-stitch knitting — again makable on both a peg loom or with knitting needles — and the impressions of that structure do not reveal the secondary detail necessary to differentiate between the two production methods.

The characterization of open-stitch stockinette knitting as ‘two-needle knitting’ implies fabric being worked flat with alternating rows of the knit and purl forms of the stitch. This is counter to the evidence of yarn having been knitted exclusively in the round during the first several centuries of the craft’s practice but Sagona explicitly states her belief that the impressions can be of fabric knitted flat.

Notwithstanding, moving the earliest direct evidence of the open-loop structure from the mid-first-millennium CE to possibly as early as the mid-fourth-millenium BCE would be of blockbuster consequence and therefore requires more rigorous substantiation than the article provides. (The earliest known specimen of cross-knit looping is from the mid-sixth-millennium BCE, found at a site near the Dead Sea, so there are no surprises there.) This wouldn’t alter the chronological order in which cross-knit looping and open-stitch knitting appeared. However, since the latter structure is a hallmark of true knitting, pending the unexpected appearance of corroborating evidence during whatever debate Sagona’s article triggers, it may be that the craft can be traced farther back than anyone else has yet suggested.

When I blogged about the Cuerdale Hoard yesterday, I had no expectation of seeing it right under my nose today. In the interim, I had visited the Gold Room at the Swedish History Museum, which is as close to an encyclopedic exhibition of Viking metal art as can be. There was a tubular silver chain there that appeared to be twisted-stitch knitting. This got me thinking about the extent to which pulling the tube through a drawplate to reduce its size and even out its surface (a normal step in this form of wirework) might alter the appearance of the knitted structure. The force of that action can shift the position of the legs of the stitches, potentially both giving twisted-stitch knitting a flatter appearance and open-stitch knitting a crossed appearance. I’ll explain the technical and structural nuance of all this in another post.

Anyway — when I was again confronting an overwhelming amount of material, today, all I had at hand was a cellphone for dealing with an unanticipated photo op that deserved more appropriate equipment. I’ll be better prepared next time, but here is one shot of the knitted tube yesterday’s post includes a drawing of, showing it from the other side.

The full tube is significantly longer than Hawkins’s truncated illustration suggests and it’s misleading to describe the wire as hair fine. 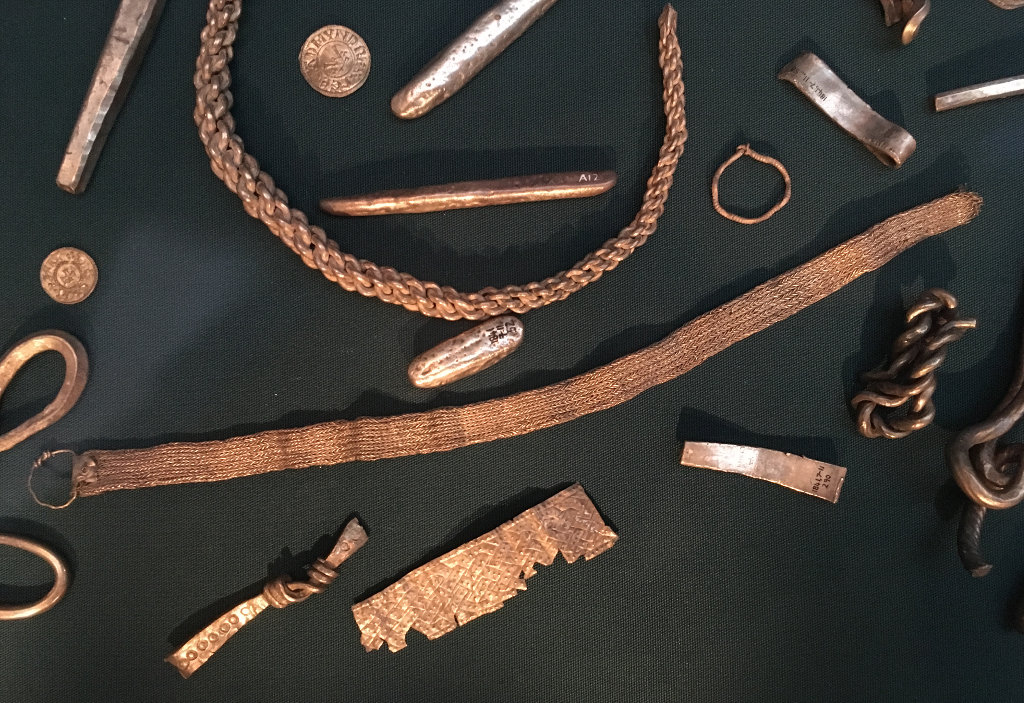 Other photos illustrate several points I intend to make in the post promised above. This is already in gestation and the photos will appear with it.

I obviously knew that I’d be traveling to the British Museum this morning but was doing so for an unrelated bit of loopery — another tale to be told — and was surprised to see material from the Cuerdale Hoard on display. To my greater embarrassment, although I knew that at least some of it was in the museum’s collections, I hadn’t checked beforehand if anything was on exhibit, to say nothing of it jogging a memory of having seen the display on an earlier visit without registering its significance.

NOTE: The scope of this blog was expanded on the fifth anniversary of the present post, to include musical instruments. The biographical and bibliographical info cited here is pending corresponding revision.

My name is Cary Karp and I’m by no means a newcomer either to printed or online publication. However, I’ve never blogged before and have adopted the nickname stringbed for the new role (clicking on that link will show a few more autobiographical details). Much of what I’ve published elsewhere has been accounts and analyses of information culled from pre-existing sources and experimental observation. The results were always intended to enhance the understanding of the underlying subject but rarely included any subjective discussion.

There’s a representative bibliography of and about my work dating back to the early days of my career, here. The origins of my blogonym are buried deeply in it, and explained in a more recent post. Although rooted in my work with musical instruments, it seemed equally appropriate to a retired museologist’s more recent interest in loopography.

Both then and now, I often set aside a portion of the material gathered in a focused study for inclusion in a subsequent publication. Anything left over after its appearance was placed in a growing cache of tidbits waiting for an appropriate context for their presentation. They were useful in the meanwhile nonetheless, typically in conversation with others who had their own stockpiles of pending material, enabling a few more pieces of a mutually interesting puzzle to be put together.

This blog is intended as an additional platform for sharing snippets of information about the histories of both looped fabric and musical instruments, assembled from sources that are not widely known. I ultimately plan to compile much of this into cohesive research reports. Serializing that process here, both in academic essays and breezier blog posts, will allow me to cover a greater range of detail than would be included in a formal publication — and afford me the luxury of being able to make a conjectural statement or two along the way.

I retired two years ago, in 2014, from a career in the museum sector that had begun over four decades earlier. One of my daily concerns during its first half was describing utilitarian objects in varying degrees of detail both for local catalogs and lengthier publication. A fair amount of effort often went into ferreting out contextual information about an object’s origin and use.

As the technology became available, I was increasingly involved with computerizing the management of museum information and my activity ultimately centered on its dissemination via the digital communication networks. This started in pre-Internet days and had me on the front lines when the museum community began to establish its identity on the new platform.

That was all quite an adventure but I promised myself I’d return to hands-on creative endeavor when my time became fully my own. The choice ultimately fell to needlecraft (a relationship that began in the late 1960s) and I’ve been happily exploring various facets of it ever since. As a recovering museologist, it didn’t prove possible to devote my effort solely to honing manual skills. I’ve maintained a parallel interest in investigating the historical details of whatever craft I’m currently involved with.

This interest has been focused for quite a while on various techniques based on looping — hence the name of this blog. Its purpose is to share information I’ve come across about the associated crafts along the way, and to raise questions that may be worth further investigation.