It may take a while for me to figure out how to get the blog logo to display where and how I want. Since this post explains its substantive relevance, for safety’s sake, here’s what we’re talking about: 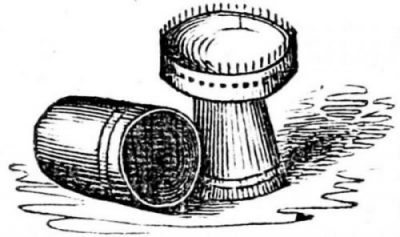 It’s an illustration of two “purse moulds” taken from Frances Lambert’s, The Hand-Book of Needlework, published in 1842. The one on the left is for a bourse en feston — a purse made by simple (or buttonhole) looping — one of many names for a fabric structure that is found in numerous other contexts, starting with the earliest archeologically recovered textile fragment and into the present day. The other is a knitting loom, functionally equivalent to the ones that are still widely marketed. The basic form of looping produced on it (“e-wrap stitching” in the current jargon) can also be made on a cup mold (where it is “cross-knit looping”), and with knitting needles (as “twisted-stitch knitting”). It has additional names in these and other crafts in which it appears. Other forms of looping also have multiple names and this terminology will be a regular theme in coming posts.

The two molds appear side by side in other sources (also to be detailed in subsequent posts), in close proximity to descriptions of knitting and crochet. They are therefore being taken as iconic of the procedural and structural parallels — whether coincidental or genetic — among the various forms of looping that this blog will be considering.