A descriptive catalog of Textiles in Egypt 200–1500 AD in Swedish museum collections, prepared by Marianne Erikson and published in 1997, includes a “Knitted stocking with Arabic text.” It belongs to the Swedish Museum of Textile History (Textilmuseet) in Borås and is dated to the 11th–15th century CE. The photograph in the catalog shows the inscription that was introduced in the preceding post. 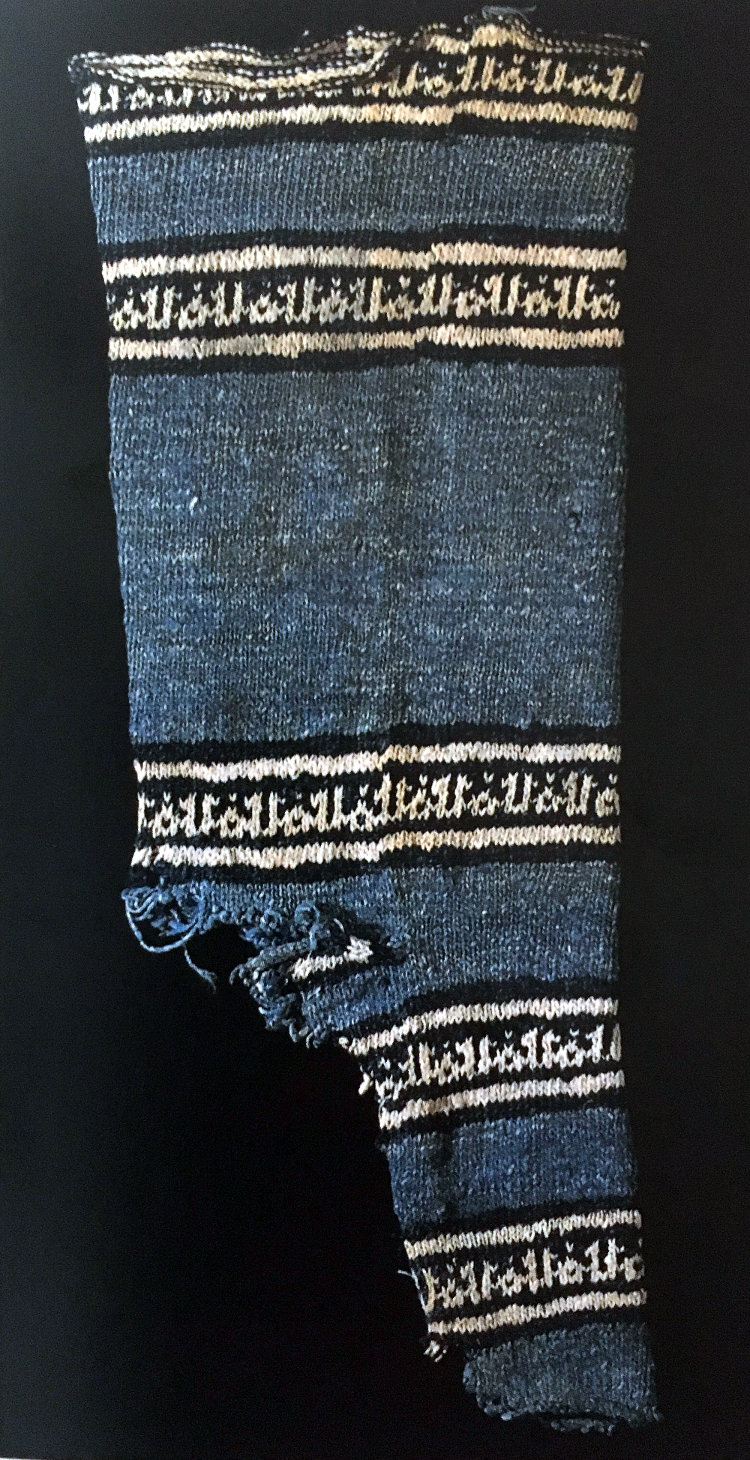 Erikson gives the following explanation for the pattern, citing an analysis by the Arabic Section of the Dept. of Oriental Languages at the University of Gothenburg:

“Five transverse white bands of Kufesque [footnoted as Pseudo-Kufic] text in dark blue. The text is a form of “Allah” — ‘-ll-h (‘allahu), the name of God repeated. The first consonant, possibly by reason of the ornament, has been left out… To a faithful Muslim it would seem impossible to have the name “Allah” on a stocking, or on any part where one has to step… Might somebody with a different religious belief have worn such footgear, as a kind of protection, during his or her lifetime?”

A conference report titled Textile Messages: Inscribed fabrics from Roman to Abbasid Egypt was published in 2006 and includes a paper by Antoine de Moor, Chris Verhecken-Lammens, and Mark Van Strydonck on the Relevance and irrelevance of radiocarbon dating of inscribed textiles. It focuses on the collection of antique textiles held by the shipping firm Katoen Natie in Antwerp, Belgium. The items selected for analysis include four stockings of the type illustrated above. The introduction to the section about them states:

“Cotton Z2S, sometimes Z3S stockings in blue — sometimes with two shades of blue — found in Egypt and knitted in the round have been dated in the Fatamid [969–1171 CE], Ayyubid [1171–1250], or even Mamluk [1250–1517] periods. Katoen Natie has four fragments of such stockings. Some of these stockings do show simple repeating pseudo-Kufic inscriptions that could be read as ‘Allah,’ which would probably be a problem for a stocking of a Muslim. Arabic-speaking Christians however also use the name of ‘Allah’ for God. Another more probable translation of these inscriptions would be ‘happiness.’”

Only two of the stockings include this graphic device (which appears on numerous additional objects and fragments of fabric with varying degrees of stylization) but all four were radiocarbon dated. The inscribed pieces most probably date from 1110–1149 and 1116–1143 CE, and one of the non-inscribed ones from 1115–1145. At a lower degree of certainty, they could all have been made as early as the 1040s. The corresponding latest possible dates differ for the three, but lie roughly between 1220 and 1260. The final stocking dates from 1019–1213 CE. The most likely dates are all significantly earlier than the one estimated for the sock in Sweden but the basis for comparison is uncertain.

These numbers leave a comfortable century for this form of knitting to have made its way into Spain, if the accepted notions of transmission are correct. These regard the cover of a cushion found in a Spanish tomb from 1275 CE as the earliest reliably dated item knitted in Europe. It is bordered with a repeating pseudo-Kufic Arabic inscription blessing the owner, without specific religious connotation, supporting the belief about the path taken by the craft into Europe. However, there are several examples of wirework with a true knitted structure (not so-called “Viking knitting”) made in Europe at a significantly earlier date, to be considered in detail in coming posts.

The interval from the knitted stockings back to the earliest nalbound Egyptian socks — whatever point of cultural or religious anchorage the Arabic inscriptions might indicate — is about ten times larger. This leaves a significant amount of technical and cultural detail to be considered while working out the relationship between nalbinding and knitting in that region. This also applies to the overlap in the stitch repertoires seen in Egyptian and Nordic nalbinding.

One of the uninscribed socks discussed above is shown on the webpage for an exhibition at the Katoen Natie “headquARTers.” The other photographs appearing with it include an extremely well-preserved specimen of what is generally termed a Coptic sock. It is radiocarbon dated to the interval 74–262 CE (as detailed in a separate report by the same lead author, which will be presented here at greater length in yet another post). Although the latter part of that range can be regarded as Coptic, the earlier part cannot be with anything approaching the same ease. The curatorial attribution of the sock to Roman, rather than Coptic Egypt is therefore worth noting.