Before focusing on specific objects with slip stitch structures that have been described as nalbinding, here are a few relevant details about the crocheted production of such fabric that weren’t mentioned in the preceding series of posts. In them (Parts One, Two, and Three) we saw how Victorian instructions prescribe cutting the yarn at the end of each row of flatwork and starting the following row with a new length of yarn. All stitches of a given type appear identically on the same side of the fabric and the difference between the front and back faces can be significant.

This also means that any intrinsic procedural advantage there might be in not needing to splice the working yarn at relatively frequent intervals, commonly cited as a differentiating characteristic between nalbinding and crochet was not regularly utilized in flatwork until surprisingly late in the history of the latter craft. (It is not a structural attribute in any case).

The early Victorian texts also say that slip stitch crochet was known and practiced as “shepherd’s knitting” long before the craft was enhanced and renamed. Slip stitching then gradually fell out of use for producing fabric and became an ancillary technique for such things as moving the active loop and joining separate pieces of fabric. Nonetheless, the encyclopedic presentations of yarncraft that were produced toward the end of the 19th describe it in full extent.

One example is the “crochet-slip stitch” in The Dictionary of Needlework by Sophia Caulfeild and Blanche Saward, from 1882 (using a drawing that had appeared in earlier publications by other authors). 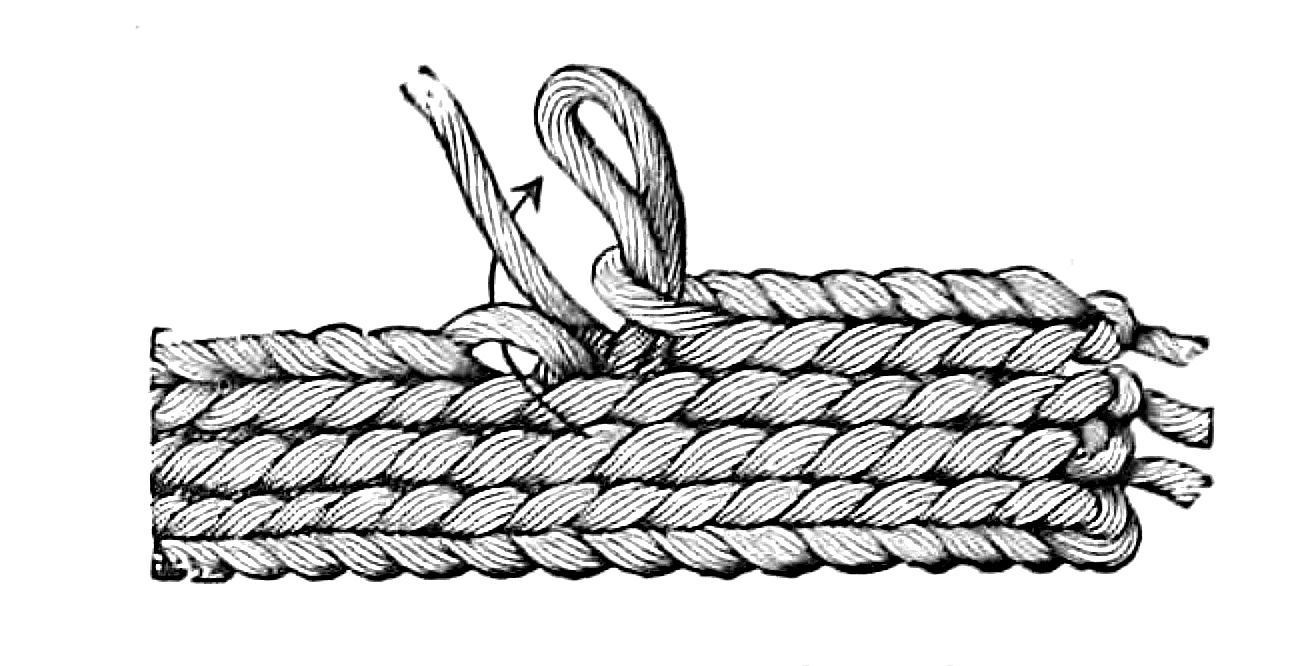 Another is the “single stitch” in the Encyclopedia of needlework by Thérèse de Dillmont, from 1886. (The direction of the chaining changes between the foundation and first slip stitch rows and then remains constant.)

The same illustration appears in the undated New Edition of the encyclopedia, which is unlikely to have been published before the turn of the 20th century. It is labeled there as a “single stitch or small closed stitch…also known as ‘slip’ stitch.”  However, in contrast to the 1880s instructions for working a new stitch into the back leg of the chain capping the corresponding stitch in the preceding row (BLO; back loop only), the New Edition allows for other points of insertion beyond the (unnoted) front leg of the loop that was the initial prevalent form (FLO).

Put the hook from the right side of the work, through the upper half either of a chain stitch or a stitch of the row below….

The instruction for inserting the hook into the right side implies situations where it is inserted from the wrong side. This has become a mainstay of contemporary slip stitch crochet in the form of inverse slip stitches, which are also found in hybrid knit/crochet fabric from de Dillmont’s day. The basic technique was described by Cornelia Mee in connection with beadwork in Crochet Explained and Illustrated, from 1845.

Although the loose yarn ends that characterize working each row with its own strand are only illustrated with the slip stitch, de Dillmont notes:

The rows are worked according to the kind of stitch, either to and fro, or all from one end. In the former case, the work is turned at the end of each row… If, on the contrary, the rows be all worked one way, the thread has to be fastened afresh each time… At the end of a row, cut the thread and pass it through the last loop; all kinds of crochet work may be fastened off in this manner.

Her illustration of the “plain stitch” shows BLO double crochet (UK) with all rows worked from the same end. This is followed by a “rose stitch” worked under both legs of the loop and turning the fabric at the end of each row — the current standard double crochet. She continues with numerous individually named stitches instantiating many possible combinations of front loop only, back loop only, both loops together; cut rows, turned rows; yarn wrapped over the hook, yarn wrapped under the hook.

The first form of crochet to be described in the literature of textile systematics appears to split the difference between these two stitches. The Systematik der textilen Techniken (Systematics of Textile Techniques) by Kristin Oppenheim, published in 1942, clearly states that the double crochet (feste Masche) is worked through the back leg of the loop. The accompanying photograph shows the work turned at the end of the foundation chain but it cannot be seen if the subsequent rows are turned or cut.

Oppenheim illustrates an isolated chain in the same photographic manner but does not include the slip stitch. She uses schematic drawings for other looped structures, including two taken from non-European objects but labeled with the Swedish term vantsöm (“mitten stitch”; then a common designation for nalbinding) as “Peruvian vantsöm” (Peruanisches Vantsöm) and “South Sea vantsöm” (Südsee-Vantsom).

A successor work, Grundlagen zur Systematik der gesamten textilen Techniken (Basic Systematics of all Textile Techniques), written together with Alfred Bühler in 1948, extends the use of schematic drawings to crochet. It also adds material about vantsöm and disambiguates the photographed double crochet structure by replacing it with a schematic drawing of de Dillmon’t rose stitch, explicitly citing its source.

An expanded edition of the Bühler-Oppenheim Systematik by Annemarie Seiler-Baldinger was published in 1973, reverting to the title of Oppenheim’s initial Systematik der textilen Techniken and with a preface written by Bühler. This retains the material on vantsöm, the schematic drawing of the double crochet, and adds similar drawings of other crochet stitches. These include what is presented as a slip stitch (Kettenmasche) worked through the back leg of the loop, although the text says that either leg can be used.

In fact, this is not a correct representation of the described structure. It shows one chain vertically connected to another but without the full loop-in-loop anchorage that is a definitive attribute of crochet. Seiler-Baldinger replaced it with another drawing that correctly shows the latter property in the second edition of the book, published in 1991. 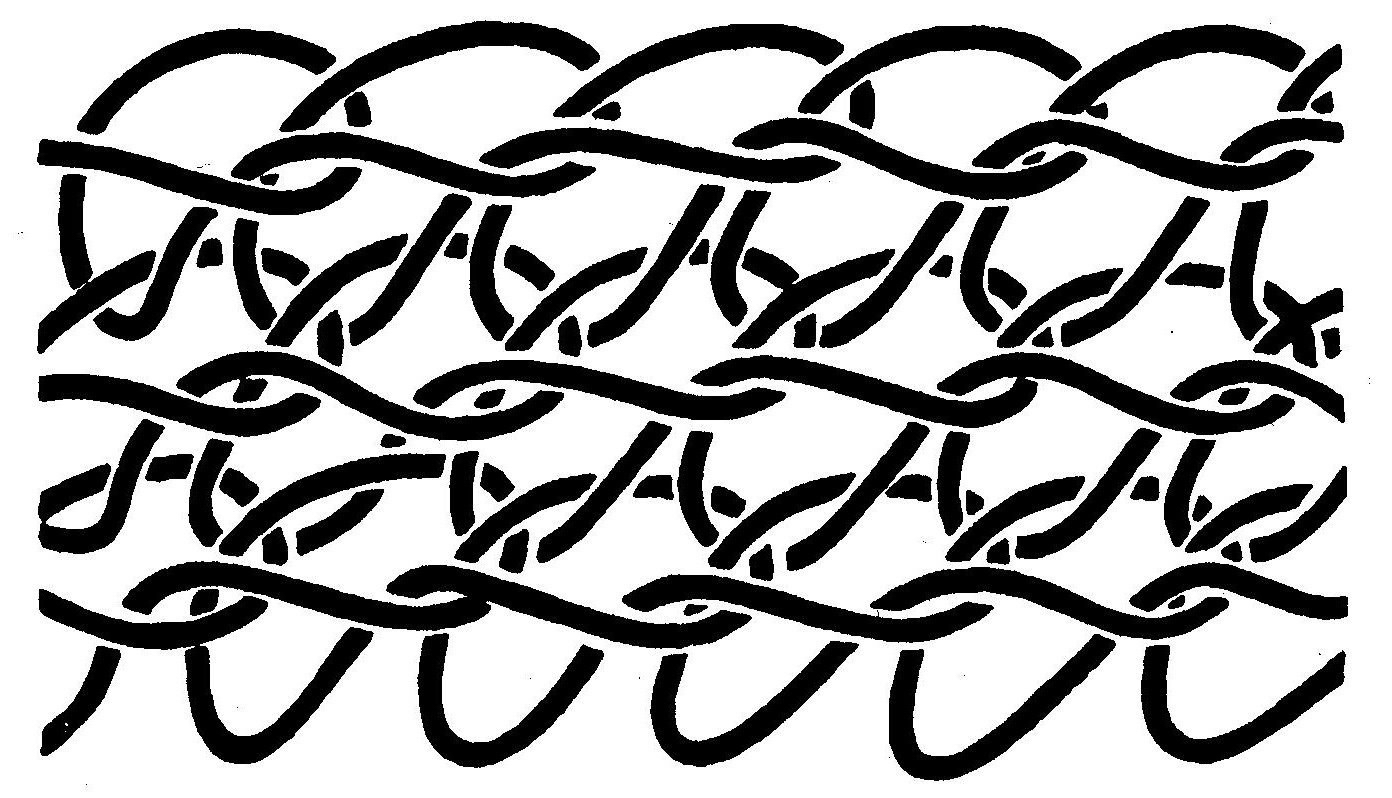 It can also be noted that both drawings are in the opposite direction to that shown by de Dillmont, whom Seiler-Baldinger otherwise cites, as well as Caulfeild and Saward. This is reasonable for the 1973 illustration of the stacked chains but wasn’t reversed in the revised drawing. This may simply indicate that the difference between it and the Victorian illustrations went unnoticed but the fabric it was based on can also have been worked in the direction shown.

An English translation of the second German edition was published in 1994 as Textiles: a Classification of Techniques. I discussed the imprecision in the correlation between the glossaries of the two languages in a previous post and included an inverted copy of the slip stitch drawing in another. The related issue of the concordance of the various graphic representations of the slip stitch was deferred to a coming post — this one — and will be considered further from the nalbinding perspective.