I ended the preceding post with what I thought was a radical suggestion about simple crochet being a handicraft equivalent to industrial warp knitting. It was intended as an upbeat to a more detailed consideration of the use of hook-tipped needles in all forms of mechanized knitting, beginning with the stocking frame invented by William Lee in 1589.

While attempting to date the advent of warp knitting machines, I found an article by R. Wheatley titled “The Warp Knitting Story” in a publication from 1989 commemorating Lee’s invention, Four Centuries of Machine Knitting. The article begins:

“Warp knitting is the mechanical equivalent of hand crochet knitting and remained as a hand operation until almost 200 years after the invention of the weft knitting machine in 1589.

Although this can’t be taken as evidence of crochet being practiced in 1589, it does indicate that from the industrial perspective, the notion of crochet as warp knitting is quite acceptable. The hook-tipped needle is a fundamental element of both warp and weft knitting machines. Here is an engraving of the central component of the latter, taken from an array of illustrations of its other details in a treatise on industrial knitting from 1785, 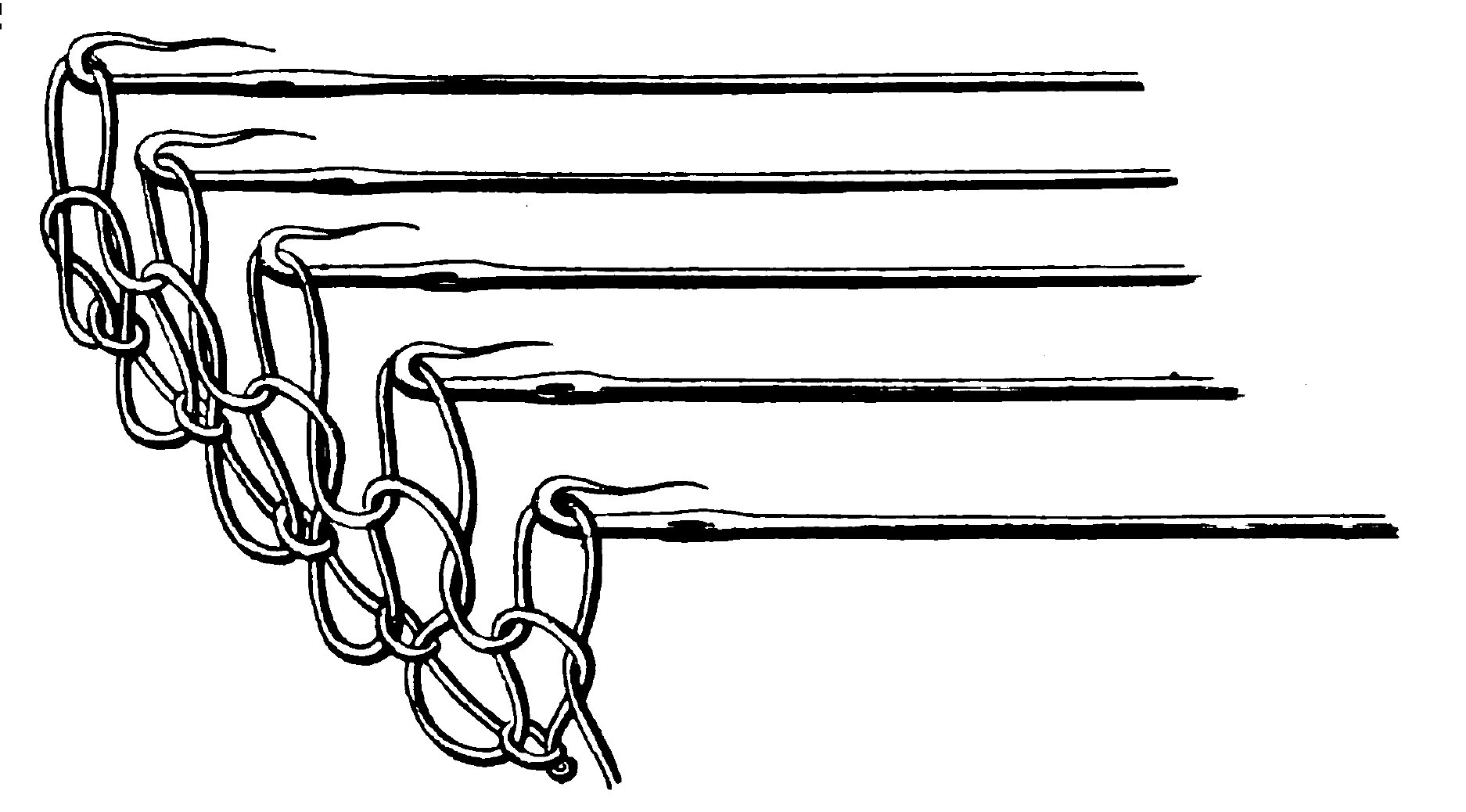 with the process shown in a recent image (from Wikimedia Commons). 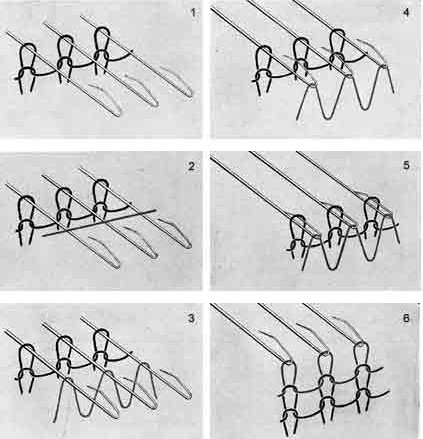 The text from 1785 includes no illustrations of warp knitting machines despite their having been invented ten years earlier, nor any images related to hand knitting with the exception of the plain crochet discussed in an earlier post. 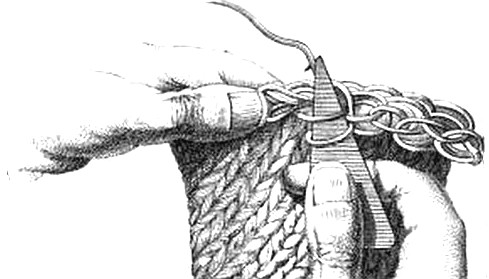 The similarity between the manual technique shown here and the core element of present-day mechanized warp knitting is apparent. 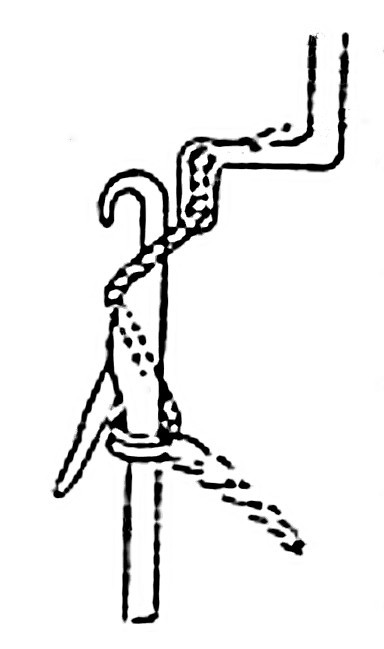 This adds at least one “warp guide” to each needle, used to wrap the yarn around it in a manner that corresponds directly to the same operation in hand crochet. The warp guide is also used to shift the yarn to an adjacent needle enabling one wale (column) in the fabric to be worked laterally into another. This means that weft knitting differs from warp knitting in the same categorical manner that distinguishes knitting from crochet. The simplest variant of the former is only worked vertically into the corresponding loop in the preceding course (row), and plain crochet is additionally worked laterally into the adjacent loop in the same  row.

The preceding illustration shows a latch hook, explaining the protuberance on its left side. The earlier illustrations show “bearded” hooks, and machines employing them require an additional mechanism to hold them closed when pulled backward through the loops. This is called a “sinker bar” and it also holds the yarn against the needles while the stitches are being worked.

This explains a term that appears in the glossary of machine knitting but not that of hand knitting. What is normally regarded as the loop in a knit stitch is further qualified as a “needle loop,” 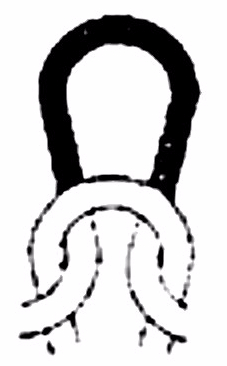 and the connection between two adjacent loops in the same course is called a “sinker loop.” 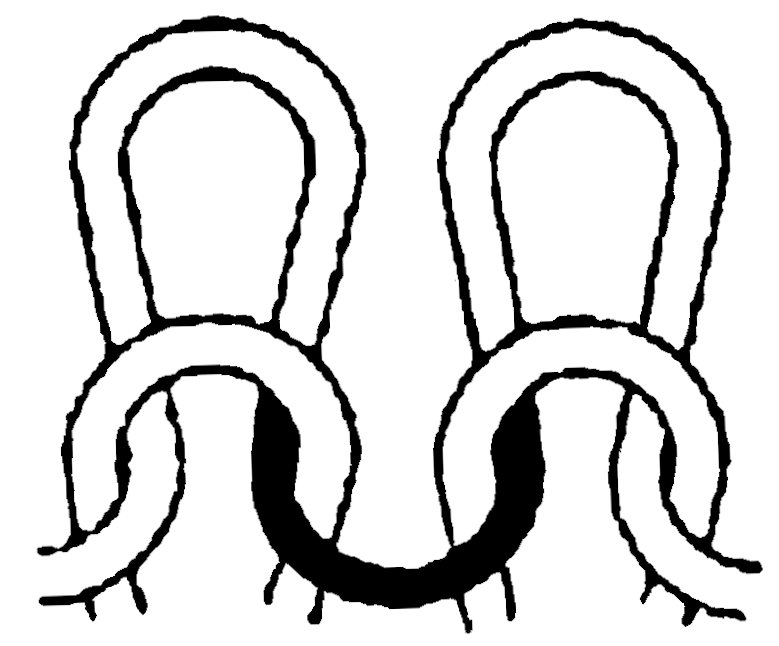 Both illustrations are taken from a formal international standard (ISO 4921:2000) detailing “Knitting — Basic concepts — Vocabulary.” It fully defines a needle loop as “the unit formed by the top arc and the two sides of the weft-knitted loop,” and a sinker loop as “the yarn portion that connects two adjacent needle loops belonging to the same knitted course.”

There is nothing apparent to be gained by introducing the term “sinker loop” into the vocabulary of hand knitting. However, its ISO definition is of more than passing interest from the systematological perspective. It describes a looped connection between the stitches in adjacent wales, in addition to the vertical looped structures that form the individual wales. As noted above, that lateral connection is otherwise the structural attribute that differentiates crochet and knitting.

The pivotal difference is that both sides of a needle loop are in physical contact with the needle loop below it in the same wale. In contrast, only one side of a sinker loop engages with the preceding needle loop in the same wale. If seen as a terminological issue, describing the difference between the number of points of contact would require its adjectival indication. Although of less immediate utility in a craftsperson’s glossary, that number can also be indicated directly.

In fact, the number of points at which a knot crosses over itself is an important factor in the mathematical theory of knots. Papers on that topic are sometimes illustrated with the familiar looped structures of yarncraft, and an early (if not the earliest) such presentation is explicitly intended to be of use in describing and categorizing them. I’ll provide at least introductory detail about it in the following post.

The illustration of a person slip stitch crocheting is odd. It clearly shows the crochet stitches being made, but the fabric is knit. You cannot make a fabric like that with slip stitch crochet. You can get some lovely stretchy fabrics and some that looks like sideways knitting, but it doesn’t look like the stockinette in the illustration. And unfortunately I fail to see how crochet is a form of warp knitting. There are many examples of hooked needles being used for hand knitting both past and present. The fundamental difference between knitting and crochet is that in knitting all the loops of a row are kept open, whether by a needle or by hooks, and in crochet each stitch is closed as the fabric is made so that only one loop is open at any one time. I can do this with straight needles (though it is awkward). In warp knitting, all loops are held open, they are not closed like in crochet. This changes the structure of the fabric.

The hand knitting technique you describe is classified as weft knitting. Warp knitting is primarily a machine-based technique. There is more about the distinction between the two in a recent post.