The chain of loops illustrated in 1771 by Alexandre-Théophile Vandermonde (discussed in the preceding post) appears in another seminal text on knot theory. Peter Guthrie Tait presented a number of papers on that topic to the Royal Society of Edinburgh during its 1876–77 session, with a condensed version appearing as an article titled “On Knots” in the Society’s Transactions. vol. 38, 1849. 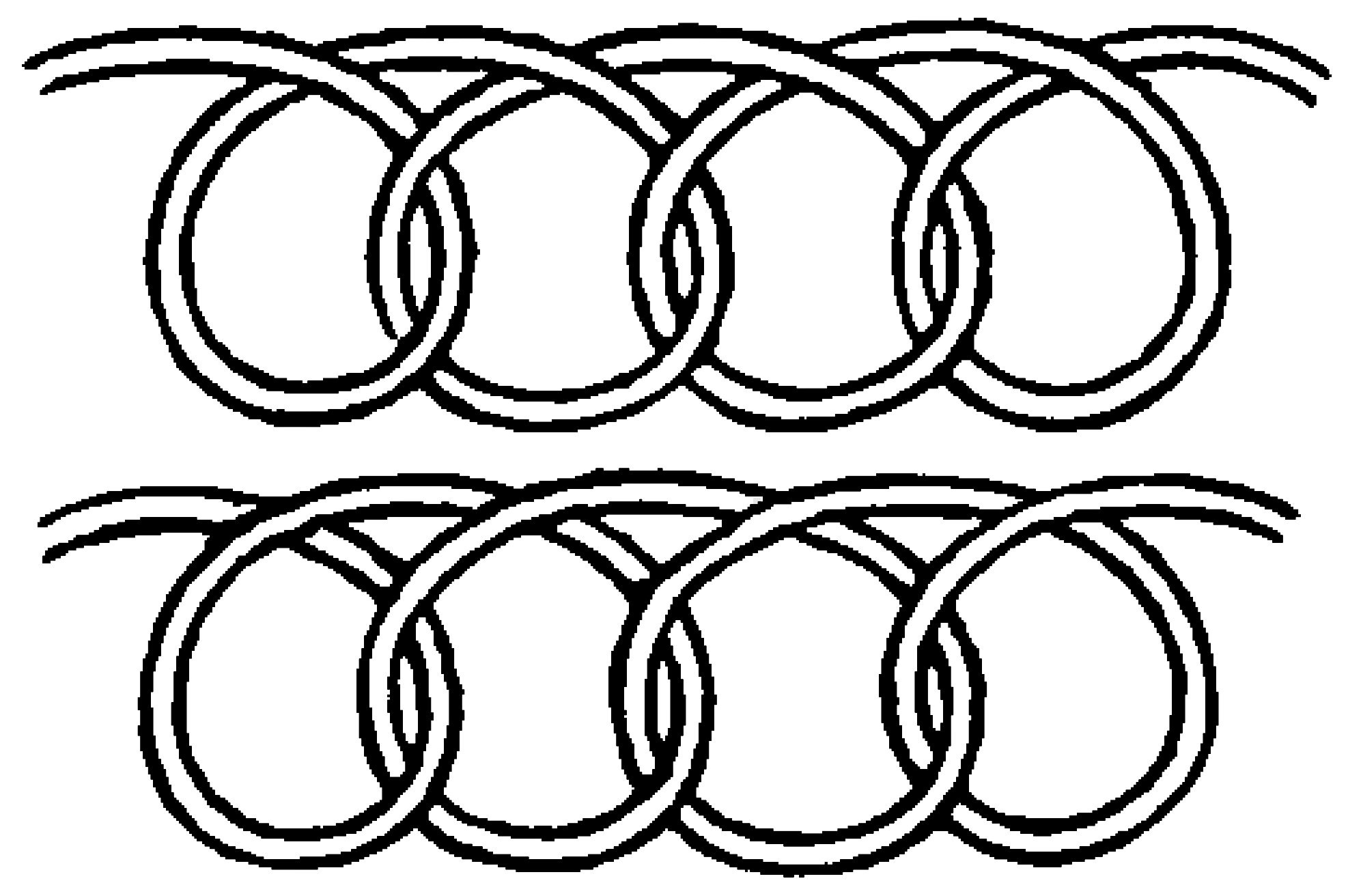 His comments on the first of the illustrated forms state:

“…the supposed number of loops may be any whatever. The free ends must, of course, be joined externally. If we make the crossings alternately + and – it will be seen at a glance that a change of one sign (i.e., that of the extreme crossing at either end) removes the whole knotting; so that there is but one degree of beknottedness. The crossings in this figure are in three rows. Those in the upper row are all copper (the last, of course, becomes silver when the sign is changed)…”

The free ends need to be joined since Tait presents the chain as a mathematical knot, which is closed by definition. All such constructs are analyzed in terms of the number of points where the closed element crosses over or under itself, the direction of each crossing, the effect of selectively changing those directions, and how the knot relates to its mirror image. He uses the the terms ‘copper’ and ‘silver’ to qualify the crossings further.

Tait’s explanation of the lower chain is:

“To give the greatest beknottedness to a knot with the same projection, it is obvious that all we have to do is make the copper crossings into silver ones, i.e., change the sign of each of the upper row of crossings. This gives fig. 9 [unnumbered here]. With five loops it has four degrees of beknottedness.”

In “On Knots. Part II” from 1884, he more clearly defines the concept of beknottedness and how its degrees are counted:

“I still consider that its proper measure is the smallest number of signs which will remove all knottiness.”

The discussion then goes further into ‘locking’ and ‘linking,’ concepts introduced in the 1877 publication along with the undefined ‘knotfullness’ and ‘belinkedness.’ The 1884 volume includes On Knots, Part III, which similarly clarifies knottiness. Locking and linking are directly relevant to the description of looped fabric, and the concepts of  both beknottedness and belinkedness can usefully be applied to its structural analysis.

Knot theory is largely focused on reducing elaborate looped constructs to their minimum knottiness by eliminating as many extraneous loops as possible. At least one further besomethingedness is therefore needed to quantify the unravelable loops that are deliberately retained in actual fabric. In the spirit of florid Victorian coinage, I’m going to start by suggesting ‘beloopedness’ and pair that with ‘loopfullness.’ Depending on how far they can be taken, it may also prove useful to co-opt the colloquial term for unraveling a sequence of looped stitches by undoing the knot that secures it and pulling the freed end — frogging. This would add ‘degrees of befroggability’ to the extensions of the glossary.

It is likely that the additional terms would have met with Tait’s approval. He took delight in artful terminology and was surely aware of the way his ‘knottiness’ otherwise sounded, adding ‘perversion’ (“deformed into its own perversion”) and ‘screwing’ (“of all kinds”) to his labels for other attributes of knots. Although ‘loopiness’ had yet to acquire the connotations it now has, its latter sense would surely have added to the delight. (His terminology has all been streamlined in the recent literature of knot theory, and I’ll also be making that shift — but not quite yet.)

Other knots that parallel looped fabric structures appear in Tait’s drawings. He provides direct justification for the present excursion by stating that “Some are closely connected with knitting, &c,” explicitly using the following three as examples.

It is further worth noting that the least complex structure beyond a simple ring —  ‘the unknot’ — to qualify as a mathematical knot is the ‘trefoil.’ This is also a quintessential loop in the craft sense, rendered mechanically secure by drawing its free end(s) through the middle as described below.

Here is Tait’s illustration of it.

He doesn’t show anything equivalent to the stocking stitch in Vandermonde’s mathematical framework. However, given Tait’s own mention of knitting, and since the number of loops in a chain “may be any whatever,” he would doubtless have been comfortable seeing his analytic procedures extended to any looped structure found in fabric. The mathematical rigor that was his intent can also be relaxed when adapting his method to such description.

In craft terms, if a loop is added to a fabric structure by leading the end of the working thread into the preceding loop and pulling it entirely through the new loop — as with an eyed needle — the result is a knot. (That’s why calling nalbinding ‘knotless netting’ is fundamentally incorrect; ‘loose-knot netting’ would be far better.) If instead, the thread is pulled into an old loop to form a new one, but the end of the thread is not drawn entirely through it — as with a knitting needle or crochet hook — there will be no knot in the structure until the thread is pulled fully through a subsequent loop. It is also possible to work end-led around a preceding loop but not through it.

Plain knitting (stocking stitch) is loop-led through the penultimate row in the fabric, which is followed with a row of crochet-type slip stitches that successively reduce the number of workable loops to a single one. The end of the thread is then pulled through it to form a knot. (There are alternative ‘bind offs’ but the end effect remains the same.)

A loop-in-loop structure where only the final loop is secured in this way has “but one degree of beknottedness” regardless of how extensive the preceding looping is. A looped structure that is punctuated with knots at regular intervals has greater degrees of beknottedness than one that is homogeneously looped throughout, but again, that does not describe any further detail in its looped component.

However Tait might have felt about any of this, the concept of loopfullness can be used to quantify differences between various forms of looped fabric, based on properties of the individual loops. As counted by Vandermonde, an open-knit loop has four crossover points with the one it’s worked into, two in front and two in back: 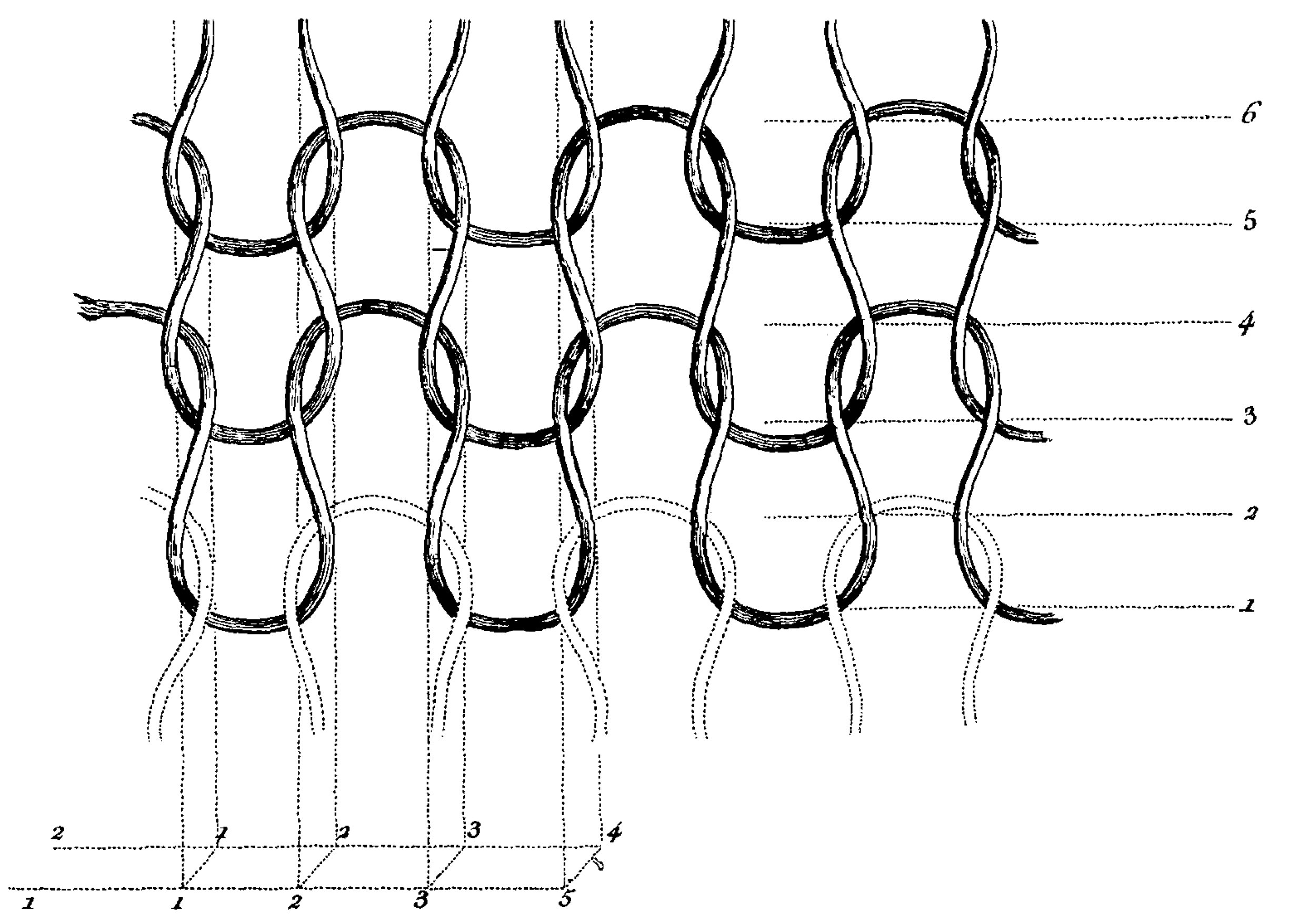 Closing the loop adds one more crossover point, thus making the loopfullness of closed-knit fabric 20% greater than that of open-knit fabric.

Working a second row of chains asymmetrically into the one illustrated by Tait produces a structure that is normally seen as plain crochet but also illustrates (left-handedly) the final row of plain knitting.

The first and last loops in this drawing deviate from the configuration of the others in order to set up the free ends for fusing into a mathematical knot (alternating + and – crossings over the join). Otherwise, each of the four complete chains in the second row starts out as an open-knit loop, with its characteristic four crossover points. Another loop is then worked into it laterally, adding four further crossover points, and imparting double the loopfullness to plain crochet than plain knitting has.

Another way of stating this is that plain knitting involves a single loop being worked into another single loop. Plain crochet works one loop into two other loops, and the question is whether the difference between loop-in-loop and loop-in-loops should be taken to indicate different degrees of beloopedness. That distinction applies not just to crochet-type asymmetrical compound looping, but also to symmetrical compound looping as typified by the knit tubes that began to appear in the 5th century CE, and compound nalbinding.

The preceding illustration of plain crochet also seeds a discussion of belinkedness that I’ll continue in a separate post. Instructions for producing such fabric, through to early 20th century (summarized here), prescribe the addition of further rows by placing a knot at the end a completed row and starting the next row afresh from the other edge of the fabric. Although the rows may be identical, each is a separate mathematical knot that is linked to its predecessor. The mode of that linkage is as important to the characterization of the fabric structure as is the configuration of the individual rows, and may prove reasonable to quantify in degrees of belinkedness.

One illustration of that third case is seen in the family of crochet stitches that interpose multi-looped vertical separators between the anchor loop in the preceding row, and the loop that closes the current stitch. These are normally termed ‘posts’ and their ‘length’ defines the difference between plain crochet and the double, triple, and other modified forms. This attribute of looped fabric is the one that corresponds most directly to Tait’s knottiness, and is would therefore be most correctly designated as loopiness.

That concept also applies to the suggestion that Tait’s conceptual model is applicable to the practice of loop-based crafts. However, I do believe that the methods he developed for analyzing mathematical knots can be useful in the investigation of what Vandermonde called “difficult questions about fabric.”

Here are a few particularly clickworthy links to additional material about Tait.