NOTE: This post initially appeared on April 1st and complies with the guidelines for loop-related humor issued by the Coalition for Responsible Loopography.

The term ‘slip stitch’ has figured prominently in the preceding suite of posts, designating the definitive element of plain crochet. The same label is used for something quite different in knitting, where a slip (or slipped) stitch is a loop that is moved from the holding needle to the working needle without knitting a new loop into it.

I’ve therefore taken care to refer to a ‘crochet-type’ slip stitch whenever the distinction was not clear from context. Thus far, that has only been needed in the discussion of fabric that slip-stitch crocheters would immediately recognize as a product of their craft but which has been described as nalbinding in a few archaeological publications (but noted as highly atypical of that craft by the two authors who have done so, also commenting on its resemblance to crochet).

Another cluster of posts examined the confusion that once attached to the relationship between ‘cross-knit nalbinding’ and ‘closed-loop knitting.’ These are also structurally identical and can only be differentiated if fabric that can have been made by either technique includes further detail specific to only one of them.

Open-loop knitting can also be produced using different tools. Those most widely employed for hand knitting are knitting needles and peg looms, while both home and industrial knitting machines use hooks. The eyed needle of nalbinding is not part of this array since the intermeshing of loops by pulling the free end of the yarn successively through those loops inherently crosses their legs and closes them.

By definition an eyed needle can pull a single strand of yarn along any path it can physically traverse. However, turning a meandering length of yarn into stable fabric requires some form of underpinning where the curve inflects, until the loops are fixed into stitches. Beyond the need for an initial foundation, closed loops can be self supporting but open loops cannot to any practicable degree. Working them requires the additional support of, say, knitting needles.

One might therefore suspect that there is a fundamental flaw is this drawing of what is presented as “needle knitting” in Odhams Encyclopaedia of Knitting from 1957, by James Norbury and Margaret Agutter. 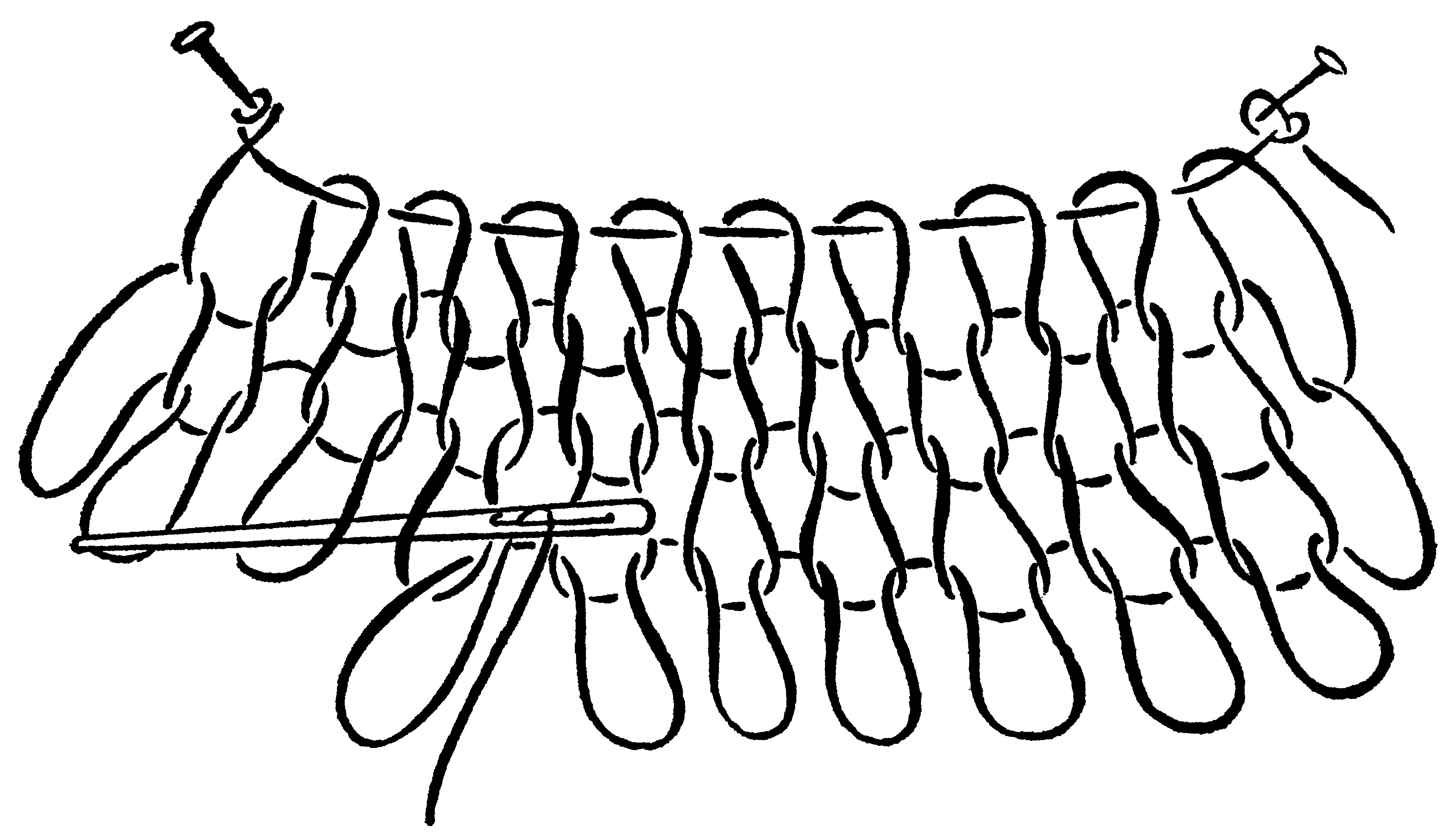 The cited source of that term is an article on “Peruvian ‘Needleknitting’” by Lila M. O’Neale, published in an issue of the American Anthropologist from 1934. Ongoing controversy about the appropriate designation for what at least in craft contexts is now widely called calling nalbinding, was fueled by Daniel S. Davidson in the same journal a few months later with an article titled “Knotless Netting in America and Oceania.”

One of the weaknesses of the term ‘needle knitting’ is that it also designates true knitting done with needles in contrast to work on a peg loom. Another is that true knitting involves the working of one loop into another with the tool(s) positioned between the fabric and the yarn supply. The yarn is worked into the fabric loop by loop in what might be called a ‘loop-led’ technique. In contrast, when using an eyed needle the yarn is interposed between the tool and the fabric and the entire working length of the yarn is pulled through each loop. Techniques doing this can similarly be termed ‘end-led.’

A core problem with ‘knotless netting’ is that leading the end of a piece of yarn through a loop that it has just formed creates a knot by any conventional definition of that term, even if it isn’t pulled tight. There is also a form of netting that is truly knotless and commonly termed knotless netting in industrial contexts. This suggests ‘loose-knot netting’ as a more precise alternative, assuming there is good reason for regarding it as netting to begin with.

It is hardly an appropriate descriptor for the dense fabric that characterizes the Nordic nalbound mittens that provide yet another generic designation for both the technique and the family of stitches produced by it — vantsöm — literally meaning ‘mitten stitch’ in Swedish. That label appears frequently in museum catalog records for socks made in the Nile valley which are commonly, although often questionably, associated with Coptic Egypt.

As a general principle, it is best to avoid categorizing something in terms of what it is not. Unfortunately, labeling end-led looped structures as knotless netting has become too entrenched for it simply to be waved off. However, since all but one of the variant forms sharing that designation can’t be knitted either, the concept of ‘knitless’ would be equally applicable. (The exception is the doubly inappropriately labeled ‘Coptic knitting,’ which procedurally is neither knitting nor historically particularly Coptic.)

This suggests the euphonious albeit ambiguous ‘knitless knitting.’ It might suffice to leave that as a mirthful curiosity. As it happens, however, there is substantive evidence of that very practice in New Kingdom Egypt, three millennia before the first description of what has thus far been assumed to be a purely abstract fabric structure.

It is illustrated with particular clarity by Montse Stanley in The Handknitter’s Handbook, from 1986, as an unknitted precursor to a true knitted structure. 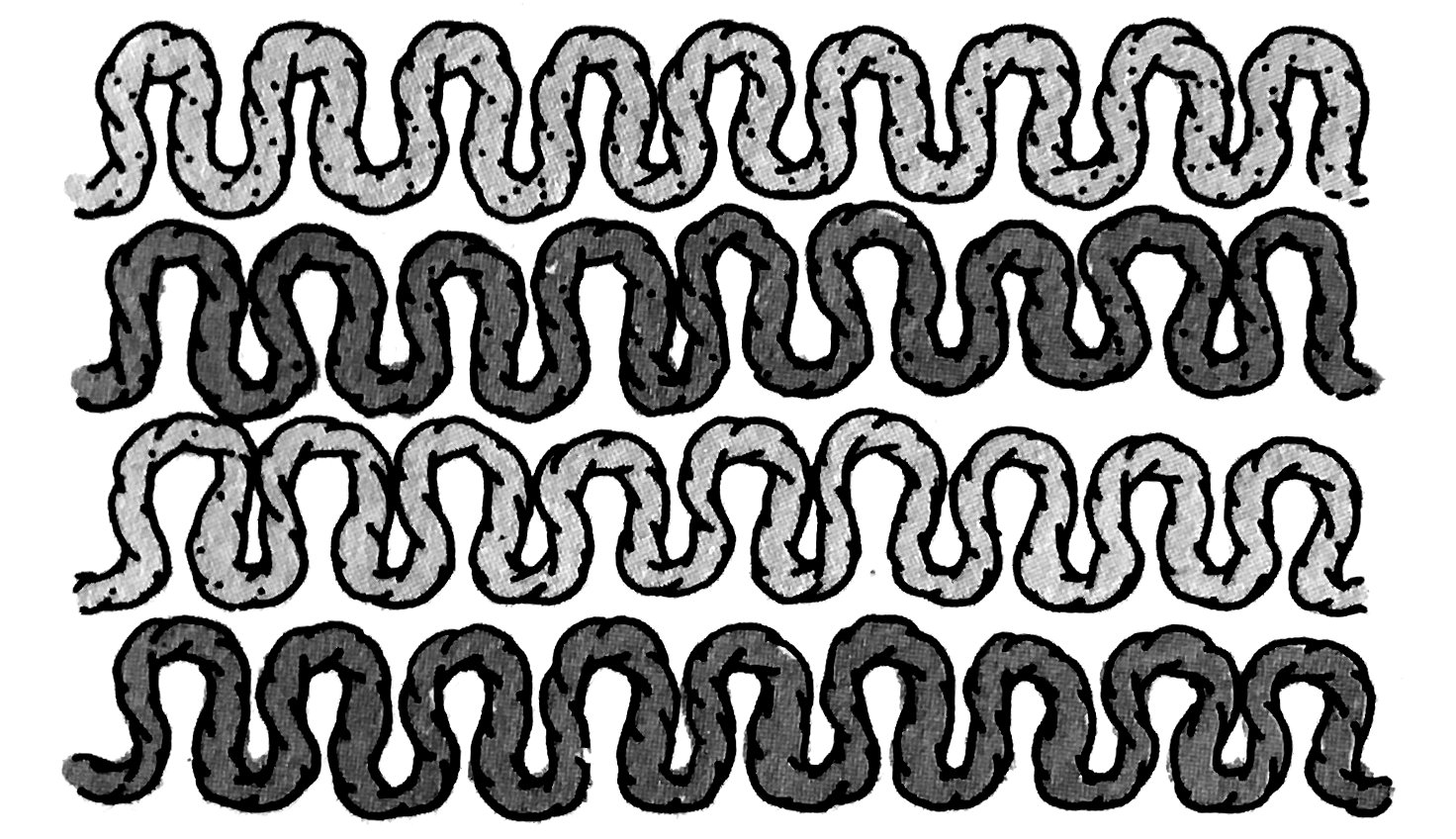 She describes it somewhat circuitously as a “non-interlocked succession of yarn waves,” avoiding the clearer alternative of knitless knitting for unstated reasons that are presumably rooted in an aversion to Davidson’s earlier knotless netting.

Whatever the explanation for her labeling may be, the structure itself also appears in a painting of the goddess Imentet on a mummy case from Luxor, Egypt, dated 1000-970 BCE, on display at the National Museum of Denmark, in Copenhagen. 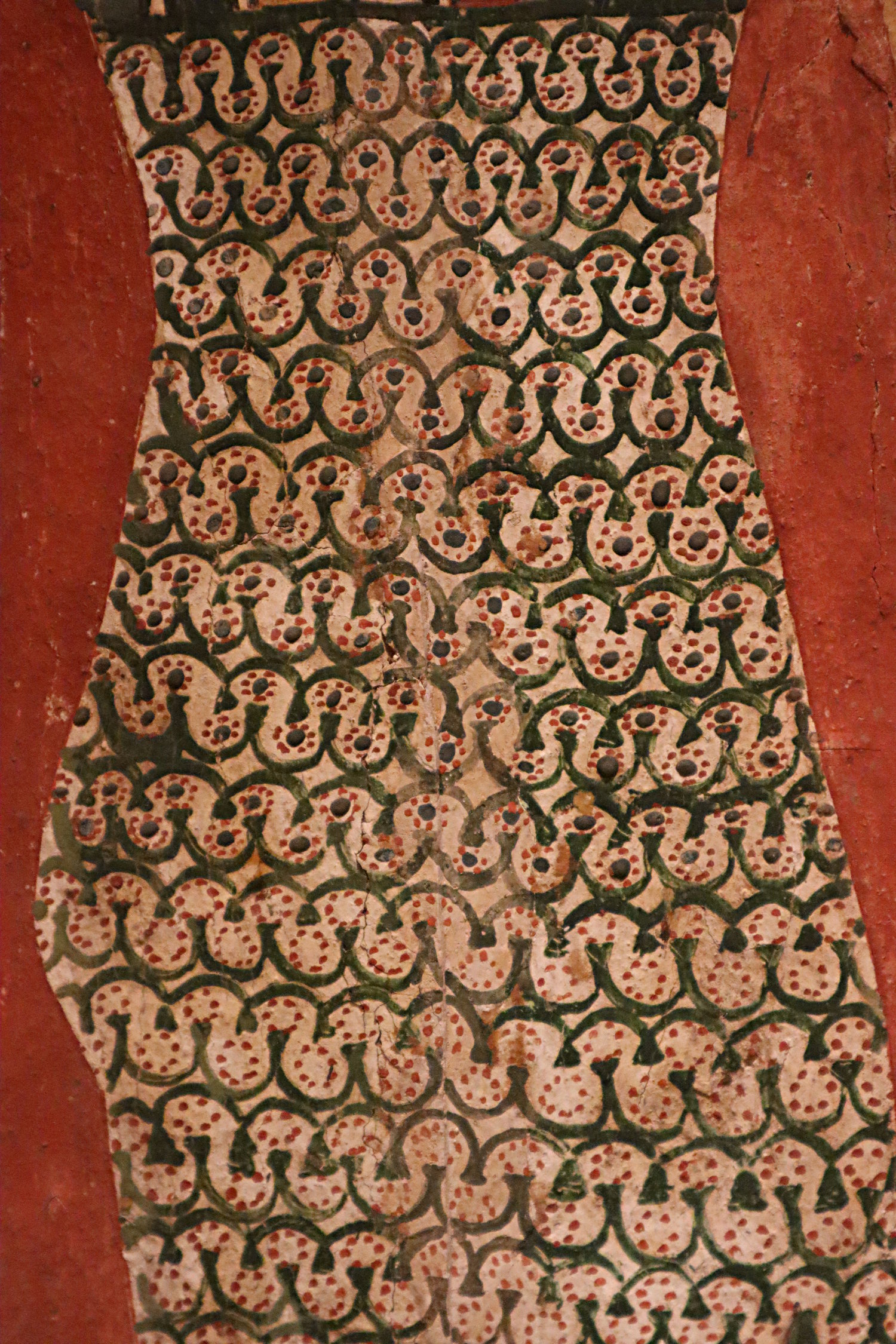 This detail is from Imentet’s torso and the following one shows her head proximal to archetypal forms of open and closed looping. 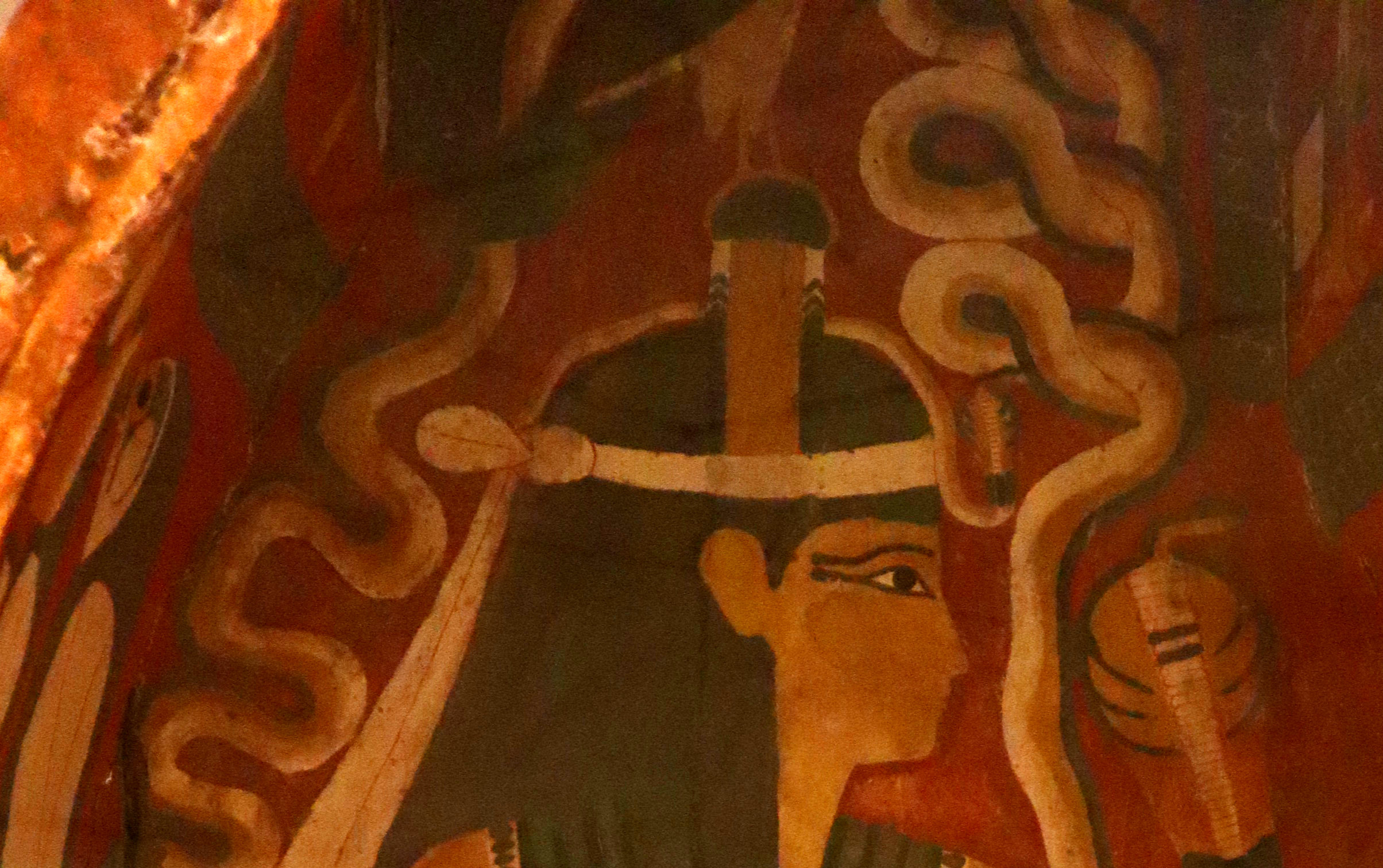 The one on the left unequivocally represents the basic element of true knitless knitting. Subject to the considerations discussed above, such fabric cannot be produced with an eyed needle or otherwise end-led. The one on the right is a loop-and-twist structure, which unlike simple closed loops, cannot realistically be worked into fabric with knitting needles. It therefore either provides evidence of peg-loom-based knitless knitting, or what in extension of Harley Davidson’s terminology might be called ‘knitless knotless netting.’

In either case this painting provides the earliest illustrations of both unknitted knittable structures and unbound nalbindable structures yet noted. Their juxtaposition in a single image provides concrete evidence of the contemporaneous practice of the two forms of loopcraft at a far earlier date than has yet been recognized.

The photographs of the mummy case shown above were taken through a glass case in a public exhibition and I wasn’t able to find a camera angle that permitted a view of the entire object without a reflection of the display lighting. The museum doesn’t have a digital image available online and here’s the best I could do on site. 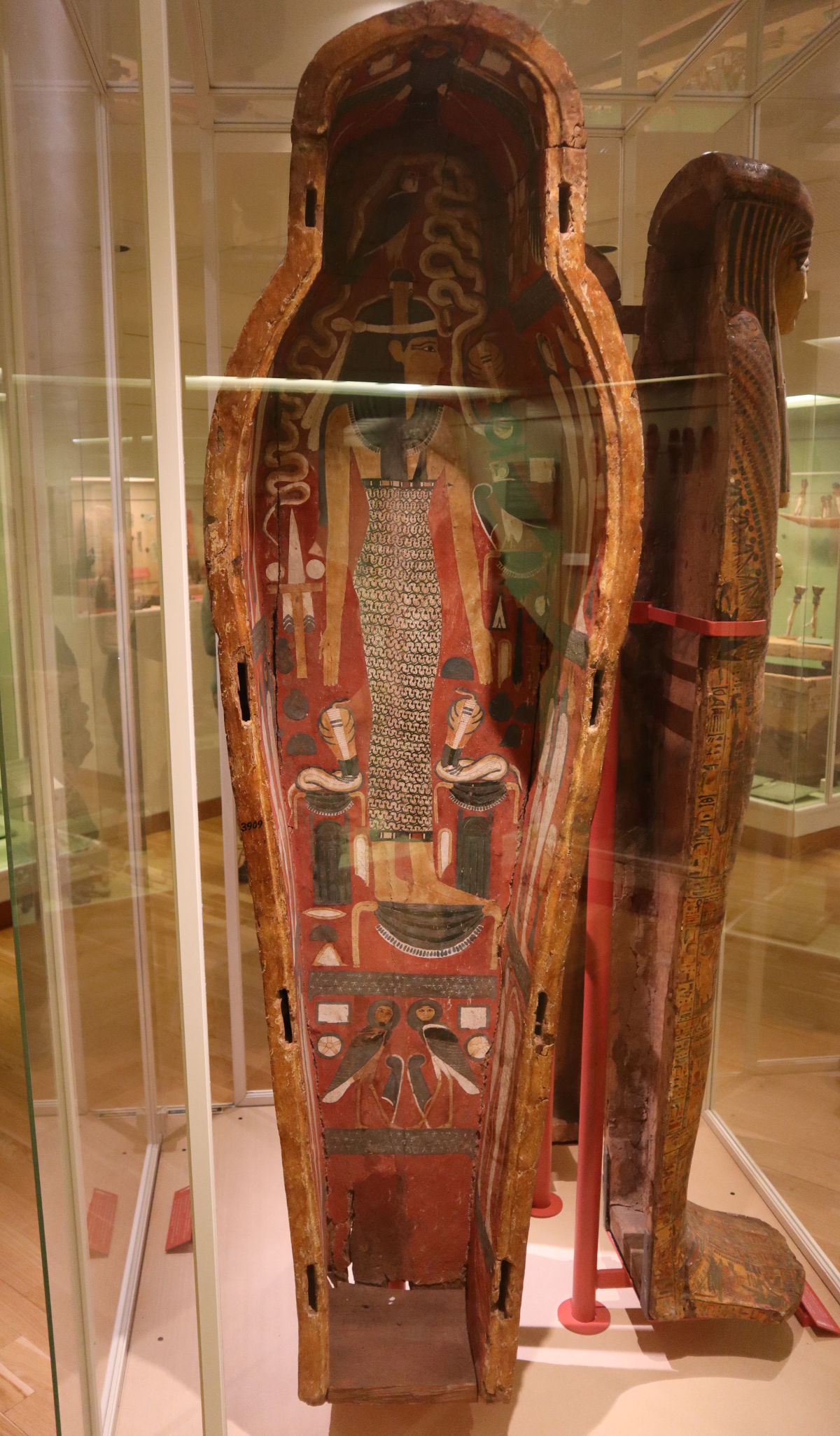