Sweden is a good place to be located for someone researching the historical and contemporary use of flat hooks for slip stitch crochet. It’s only a thirty minute walk from the desk where this blog is maintained to a folkcraft store in central Stockholm that regularly stocks such hooks, so it was easy for me to gear up for testing my findings experimentally. (A few years ago flat hooks were to be had just around the corner at a local yarn store that has since closed.) Books about the traditional Swedish practice are currently in print and tools survive from the late-18th century. This is also when evidence of comparable traditions begins to appear at other locations significantly enough distant from each other to make investigating the possibility of cultural and technological exchange worthwhile.

A previous post discussed the earliest illustrated description of flat-hook slip stitch crochet, published in France in 1785, but I overlooked the importance of something stated in that document. It clearly indicates that flat hooks were made in varying sizes and selected as appropriate to the intended stitching. Reexamining the corpus of such hooks in that light quickly revealed that it was incorrect of me to have presumed that all such hooks were of a relatively large gauge.

An undated flat hook in the collections of the Vänersborg Museum (attribution here) is clearly very narrow.

Another hook in the collections of the Nordic Museum (attribution here) shows the same secondary taper toward its tip and it seems clear that this dimension of a flat hook was matched to the gauge of the stitching and weight of the yarn. 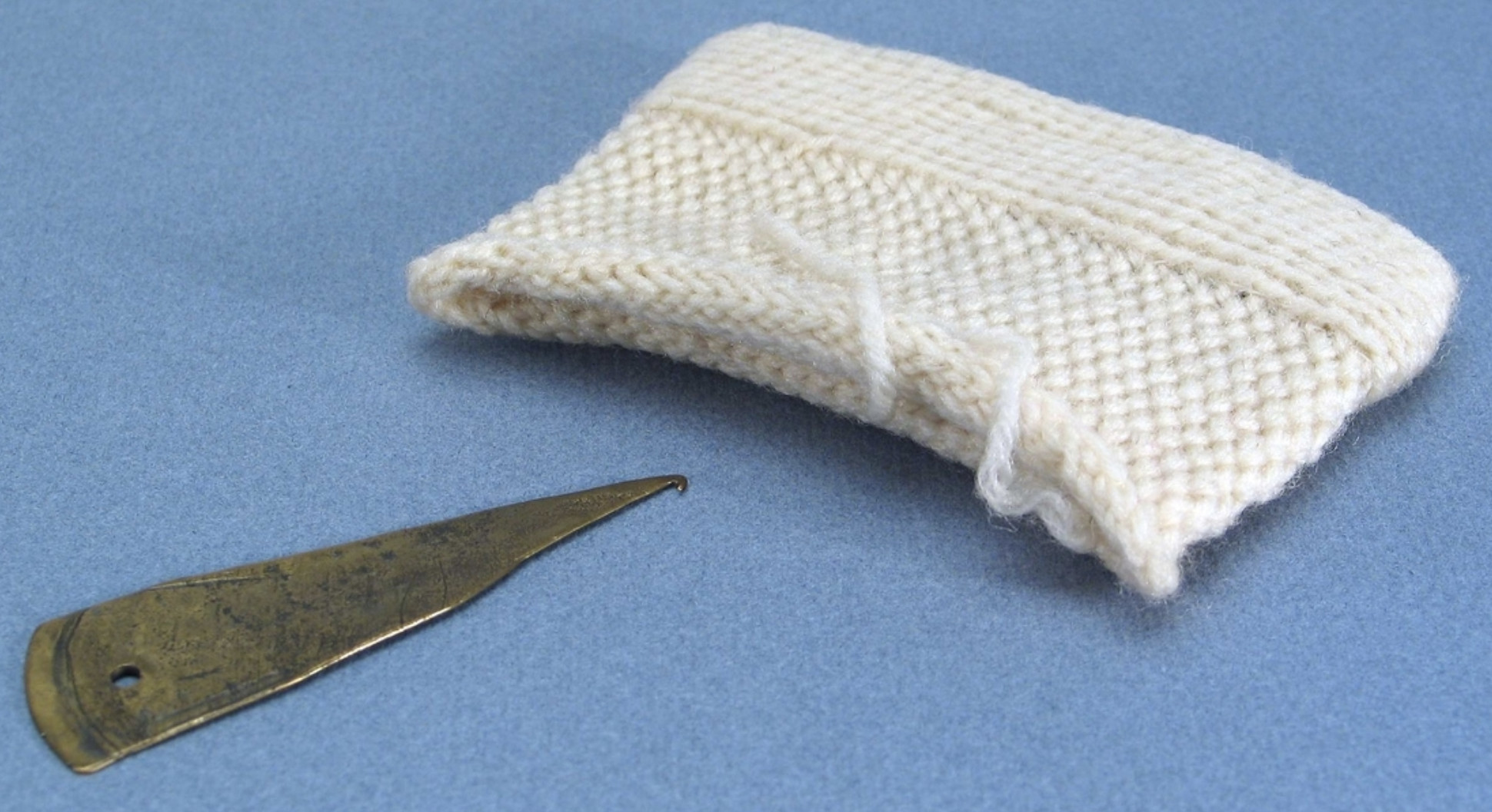 I didn’t recognize the full significance of a document from 1812, either, when I made summary reference to it in another previous post. This is The Memoirs of a Highland Lady by Elizabeth Grant, where the English term “shepherd’s knitting” and its special hook first appear.

“…he wore a plaid cloak, and a nightcap, red or white, made by his industrious wife in a stitch she called shepherd’s knitting; it was done with a little hook which she manufactured for herself out of the tooth of an old tortoise-shell comb, and she used to go on looping her home-spun wool as quick as fingers could move, making not only caps, but drawers and waistcoats for winter wear…”

The thin finely tapered segment of the hook at the Vänersborg Museum can easily be reconciled with something that might be made from the tooth of a comb. In the doing, it also becomes apparent that shepherd’s knitting was not intrinsically limited to work in heavy wool yarn, nor was the shepherd’s hook restricted to slip stitch crochet.

This would provide one possible explanation for a cap in the collections of the Victoria and Albert Museum, catalogued as crochet made in the 1700s or 1800s (detailed in a previous post). 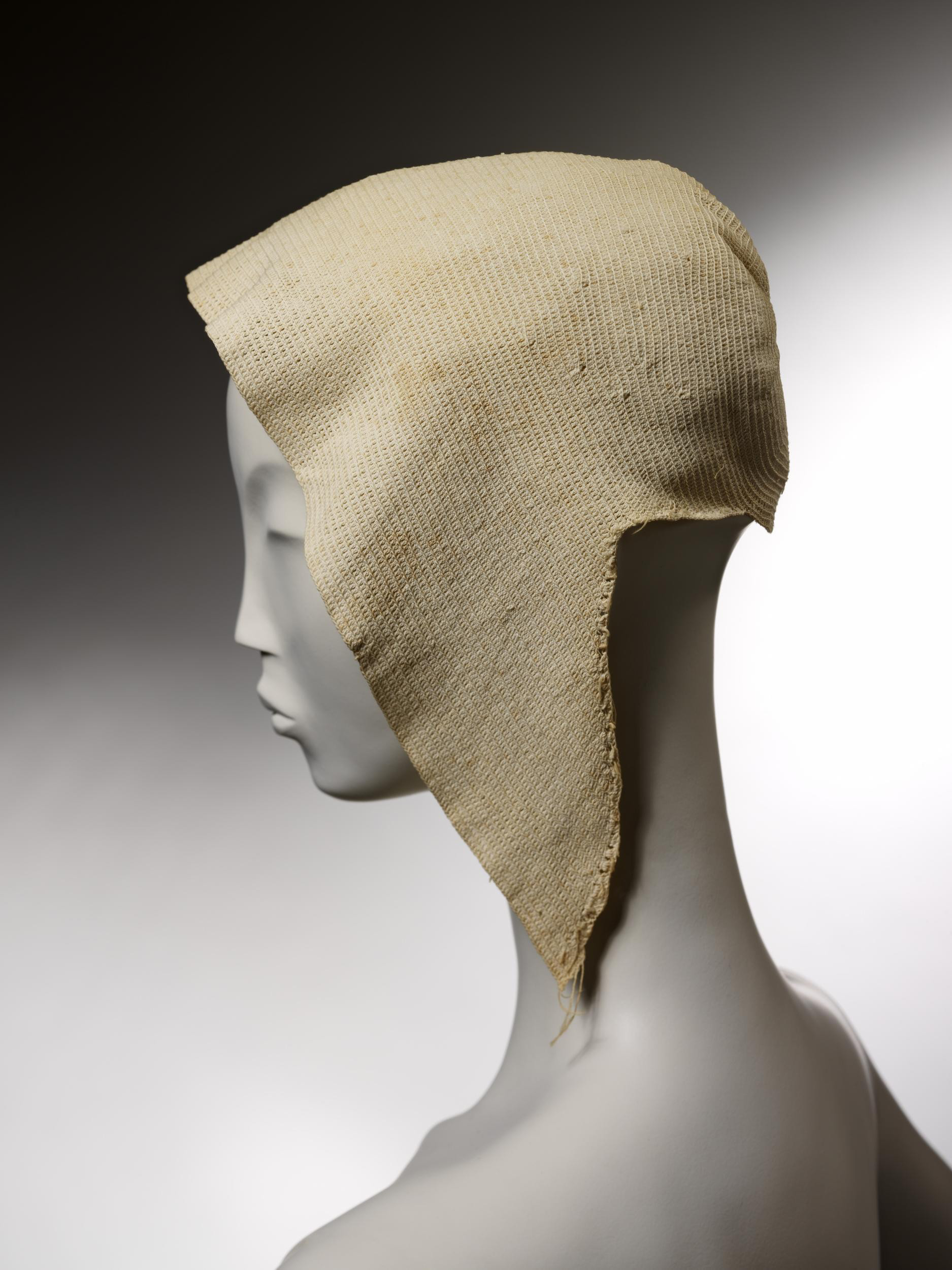 If it can be dated correctly to the 18th century, it would pretty much have to be categorized as shepherd’s knitting. The problem is that its primary stitch is treble crochet (UK), which is otherwise unattested at that time. 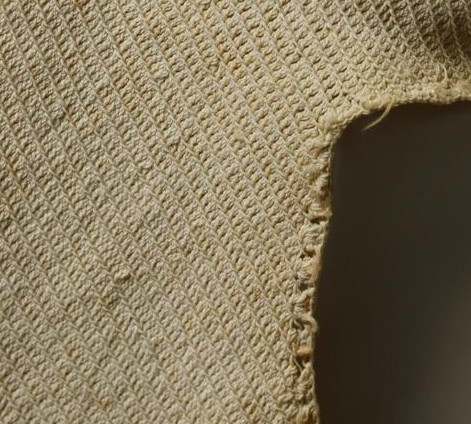 If it is from the 19th century, the stitch is no longer anachronistic but a fine-gauge hook would still be required. This can credibly be provided by one of the Vänersborg design or a smaller tool corresponding to its hooked segment, as might be fashioned from the tooth of a comb.

The cap can also be a deliberate attempt by a later crocheter at making something with a rustic appearance, unaware of the slip stitch being an identifying characteristic of shepherd’s knitting, or simply unconcerned with that level of detail. Whatever the correct explanation may be, it seems clear that the flat hook has never had a tightly set form. There are many additional examples with the configuration illustrated above, as well as of characteristic designs in other regions. In at least the north European traditions considered here, they were clearly made in gauges appropriate for both light and heavy yarn.

It is not possible to know whether people working fabric with what the Victorian literature sometimes termed a “shepherd crochet” saw any relationship with its traditional namesake. However, a Swedish flat hook in hallmarked silver from circa 1790, one shown in Dutch instructions from 1833, and later German ones, all indicate that the traditional craft from which they emanated was also practiced at the urban worktable.

I am looking into making my own shepherd’s hook as they really aren’t readily available for purchase.

Have you tried here? http://www.lacis.com/catalog/data/AB_Crochet.html#TT90

Thank you very much! Actually, I found a link to Lacis a while ago, but for a few days I couldn’t get the webpage to load. I figured they were no longer selling items. Now that I have visited the site I see some other things that I want to order also!