The post before last discusses the appearance, in ordinary crochet, of structural elements taken from the long-hook crafts of Tunisian crochet and crochet tatting. It focuses on Swedish practice in the second half of the 19th century and one of the source documents is the Handbook of Women’s Handicraft (Handbok i fruntimmers-handarbeten) by Hedvig Berg, published in 1873-74.

Berg is atypically rigorous when categorizing fabric, tools, and techniques. In a discussion of the use of a crochet hook for making types of lace that are normally produced with other tools, and where the difference between crochet and the namesake form is clearly visible, she includes the label “imitation” in the name of the crochet stitch. For example, she calls the first presented type of crochet lace “Guipure crochet” but the one following it is an “Imitation of Valenciennes lace.”

The 1873 publication is also where the Swedish term krokning (hooking) is first attested as a designation for the family of stitches now normally termed Tunisian crochet. It is introduced in a chapter on “Crochet with wool yarn.” The section on krokning includes one stitch labeled as ordinary crochet but commences by placing a number of loops on the hook in the manner that typifies Tunisian crochet. (The current repertoire includes stitches made with this technique but a number of structurally interesting older ones have fallen out of use.)

A related stitch is described in a Swedish publication from 1864, appearing side-by-side with ordinary Tunisian crochet in a child’s shoe. This is also discussed in the post before last, showing the illustration again here. 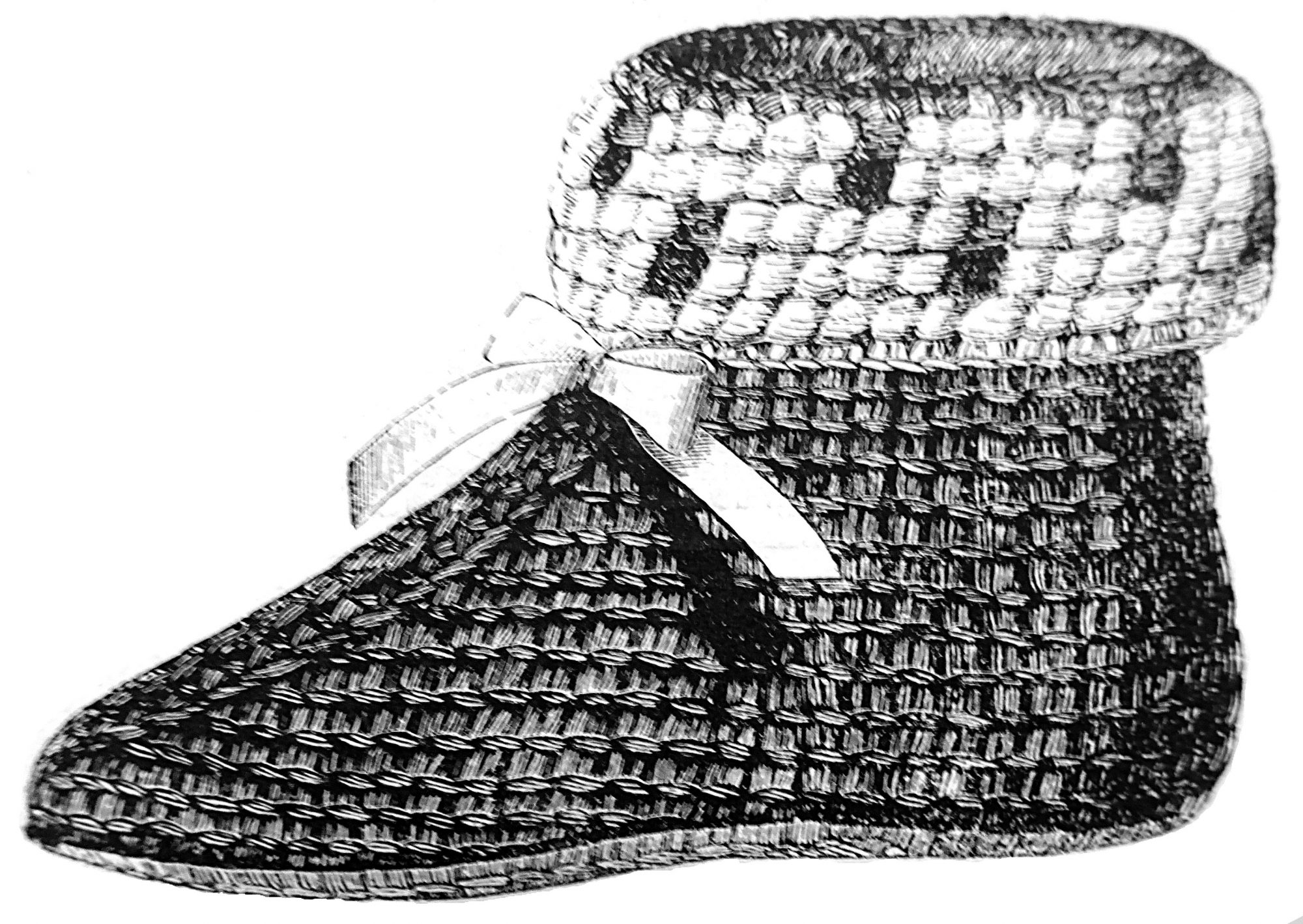 The hybrid technique is used for the cuff and the same method recently reemerged in what was presented as a nearly forgotten variety of Swedish crochet. An article titled “Crochet Historic Mitten” (Virka historiska vante) appeared in the 21 October 2011 issue of the Swedish weekly magazine Land. The banner photograph is captioned:

Excerpting pivotal snippets from the article:

The adventure with crocheted nalbinding began in the 1970s when staff at the county museum in Jämtland came across a mitten they didn’t understand. It looked as though it were nalbound but in a different way, and if Elsie-Britt hadn’t seen it, it would likely have been discarded… Elsie-Britt says, ‘I immediately saw that it was crocheted but didn’t know how, so I asked if I could borrow it to examine more closely at home.’

She was permitted to borrow it until the following morning only if she promised not to damage the object. After a wakeful night she had solved the mystery. Elsie-Britt is somewhat reticent about how she managed to decode the stitches but it apparently involved some creative ‘poking’ among them. The mitten was then returned to the museum fully intact. After the discovery Elsie-Britt brought her friend Ulrika in on the secret… Ulrika says, ‘It’s like nalbinding, a bit limited, but a lot of fun and much easier to learn. It’s also an advantage not to need to splice the yarn as is necessary with nalbinding.’

The article then presents Ulrika’s instructions for a pair of mittens crocheted with the stitch pattern Elsie-Britt extrapolated from the original mitten. In the interim, Ulrika had contacted Ullcentrum (Wool Center), a regional yarn producer with special interest in traditional Swedish yarncraft. They, in turn, consulted with the National Association of Swedish Handicraft Societies about an appropriate designation for was subsequently called virkad nålbindning (crocheted nalbinding).

Ullcentrum included it among the crafts they display at public events, such as the Sewing & Crafts Festival in Stockholm, where it is also taught. They first showed the crocheted mittens there in February 2012, where a visitor to their stand, Elsa Hällberg from Arbrå (in the province of Hälsingland, directly southeast of Jämtland), recognized the stitch. On seeing them she said, “…but I crochet mittens like that…my mother and grandmother taught me how to do it…”

The stitch Elsa reported is less complex than the one described in the initial magazine article but they are unquestionably related. Ulrika added it to her documentation with the name “Arbrå pattern” (Arbrå-mönstret), and labeled that of the Jämtland mitten as the “Original pattern” (Originalmönstret). At the same time, she presented an intermediate pattern of her own devising called “Crochet simple nalbinding” (Virkad enkel nålbindning). Her instructions for mittens using each of the forms are available on Ravelry: the attested one from Arbrå, the deduced Original, and the hybrid Simple.

This video shows how the Original pattern is worked, with the first stitch in a start-up form, and the following ones all fully in pattern.

Four loops are first placed on the hook in a manner that provides the vertical bars used as subsequent points of insertion. The Swedish narration emphasizes that the two loops closest to the tip of the hook need to be elongated, as do Ulrika’s instructions. The need for loops not pulled closely around the hook is shared by slip stitch crochet, where it is met by using a flat tapered hook. In fact, explicit instructions for the use of that tool for making the four-bars-on-hook pattern in the cuff of the slipper shown above appear in an earlier German publication, to be discussed in detail in a separate post.

Returning to the Swedish mittens, the wording of what started out unambiguously as a crochet stitch pattern is less precise in the compiled description of the variants. That text can be read to suggest that, despite fundamental procedural and structural differences, crochet nalbinding and ordinary nalbinding are forms of the same craft.

This triggered a reaction in the Swedish blogosphere noting that a crucial distinction was being blurred, regardless of how interesting the crocheted emulation of nalbound fabric might be. This confusion extended into anglophone dialog by the Simple pattern being labeled “Simple nålbinding” on the Ravelry page. Comments in the accompanying discussion clearly indicate that it was taken as nalbinding without regard to the somewhat clearer parallel Swedish label “Virkad enkel nålbindning.”

One consequence of the ensuing controversy was to damp further interest in the origin of the technique and its potential historical interest, despite the kerfuffle over its name. As far as the Jämtland pattern goes, if a night of loop-tugging on a single mitten is all there was to it, there would be little more to say. Despite the avowed return of the mitten to the museum intact, it is no longer there, and Elsie-Britt’s results cannot be corroborated.

It is not clear if the mitten actually belonged to the museum’s collections. The consultation may have been part of a discussion about whether to accession it formally or discard it. However, if it was “likely from the 17th century” as Ullcentrum suggests in a discussion of one of their blog posts, it is exceedingly improbable that the museum was contemplating the latter option.

It is similarly unclear when during the interval between the 1970s and the 2010s the examination took place. Swedish museum policies about permitting objects to be taken off-site became continuously more restrictive in that period, with an earlier date being conceivable and a later one far less likely.

The craft that Elsa learned from her mother and grandmother casts an entirely different light. The commentary to the blog post just cited also notes that her aunts were involved in teaching it to her. She was therefore the third-generation bearer of a what would only have been a single-family tradition if her grandmother had invented it, rather than having herself been taught it in a broader context.

The Arbrå pattern is a product of that tradition, whatever the scope of the community that shared it may have been. In contrast, the Jämtland pattern is the result of a single examination of an object by someone who, although clearly in an expert position to distinguish between crochet and nalbinding, had no prior involvement with whatever tradition the mitten might represent.

The four-loops-on-hook commonality of all the patterns Ulrika describes harks directly back to the earlier hybrid crochet stitches. The chronology of their appearance during the latter half of the 19th century comfortably allows Elsa’s grandmother, or even great-grandmother, to have been familiar with them or any undocumented form of traditional crochet or hooking that they may have typified.

Had Hedvig Berg included the Arbrå (or Jämtland or Simple) pattern in her 1873 compilation, she would certainly have placed it under the heading of crochet. If presenting it in the context of mitten production, or some other garment with a strong traditional association with nalbinding, she could easily have labeled it ‘imitation af bindning,’ ‘imitation af nålning,’ or whatever her preferred designation for the emulated technique may have been. If contemporized to ‘crocheted imitation nalbinding’ the added qualifier allows the stitch pattern(s) to take an unladen position on the spectrum of looped techniques used for making mittens in Sweden, deserving further investigation in its own right.