A comment on the preceding post about the status of crochet in the 1820s sent me back to revisit Elisabeth Bayle-Mouillard (the second of the early 19th-century authors on whom this blog focused shortly after its inception). The first edition of her “Young Ladies’ Handbook or Arts and Crafts” (Manuel des Demoiselles ou Arts et Métiers) was published in Paris, in 1826, under the pen name of Madame Celnart. The comment notes that this book served as the basis for a German counterpart written by Charlotte Leidenfrost, that appeared two years later and was the source of the text about crochet translated in the previous post.

“The initiative for the present small work was taken when the publisher sent the author the Manuel des Demoiselles ou Arts et Métiers by Madame Celnart with the assignment of preparing a free translation.”

After a few complimentary words about Bayle-Mouillard’s efforts, Leidenfrost becomes rather critical of the stylistic and pedagogical shortcomings of the text she had been presented with. The preface goes on to note that the resulting German publication excludes some sections of the French one, completely rewrites others, and adds extensive new material,

“…so that in the end, the disposition of the first work was almost all that remained, and the present work can in no way be presented as a translation of it.”

Leidenfrost then explains how her material on crochet, in particular, differs from Bayle-Mouillard’s. I’ll delve further into that in the next post and will focus the remainder of the present one on two chapters in the French book. The word crochet appears there as a designation for the tool and the action of its use, but not the craft, despite it having been applied in its present sense three years earlier in several Dutch instructions (translated here, here, and here).

Bayle-Mouillard presents instructions for purses made with a hook (Bourses au crochet) but notwithstanding the expectation raised by the title, the craft they describe is loom knitting. There is a full translation here and it is even more surprising that the same instructions still appear in the fourth edition from 1830. The same applies to a second set of instructions in a chapter on passementerie, about the use of a crochet for braiding translated below. These describe the stitch that is fundamental to what is now known as slip stitch crochet but, as in many early references, call it a “species of knitting.”

One of the details that I failed to appreciate in my initial consideration of both sets of Bayle-Mouillard’s instructions was the possibility of the crochet illustrated for braiding having been the “hook that resembles a tambour needle” in the instructions for the loom knit purse. However, she also illustrates a tambour needle in the context of embroidery, with the characteristic hollow handle used to store needles of various gauges. There can be nothing on a tambour needle that might snag the base fabric as the needle is pulled upward through it and the tip shown in the drawing is likely to be stylized to highlight the hook on a standard tambour needle.

There is no similar doubt about the deliberate shaping of the hook used to make the braid, illustrated free from its “wooden handle.” However, the exposed portion of it that fits into the handle is too short to reach the side-screw in the tambour handle, so this is not simply an enlarged illustration of a replaceable tambour needle.

If the rounded tip is not taken to preclude its use for tambour embroidery, the outward bend at its free end certainly does — and also enhances its utility for loom knitting. The similarity between it and the hook made from a bent nail illustrated in the first known instructions for slip stitch crochet, also French from 1785 — Du tricot au clou (About knitting on a nail) — suggests a continuity that persisted past the emergence of crochet in its current sense.

Here is the 1785 nail shown next to the strongly tapered flat hook that appears in later sources, 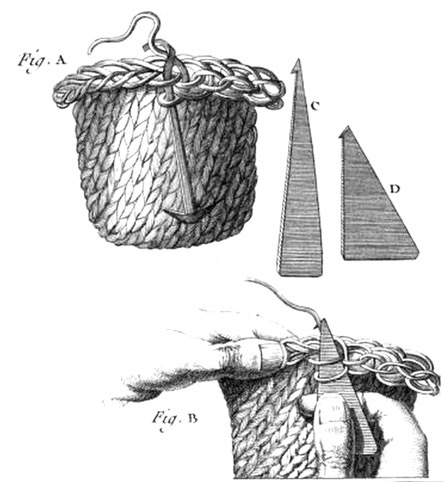 I had previously taken references to a “shepherd’s crook” in English texts about slip stitch crochet — shepherd’s knitting — to be a corruption of the “shepherd’s hook” normally associated with it and typified by the flat hooks in the 1785 drawing. The side-by-side illustration of the two forms, together with Bayle-Mouillard’s separate illustration of the crook-shaped one, challenges the validity of that belief and provides a substantive basis for separately labeling the implement’s variant configurations. As will be seen below, her use of the crook form for passementerie suggests it to be the elder.

The renewed look at Bayle-Mouillard’s instructions also answered a question raised in a more recent post on Braid Stitch Crochet. The first description of the structure bearing that name is from 1857 but I strongly suspected that the stitch itself had been discussed by earlier authors. As it turns out, that is precisely what Bayle-Mouillard did in 1826. She illustrates the basic mechanics of crochet with the braid stitch but then leaves it to the reader to envision the extension of that technique into the production of smaller items of passementerie. These include the diamond mesh discussed in an earlier post but there is no mention of solid crocheted fabric.

The chapter in which they are presented goes on to discuss other forms of passementerie made with a hook that are unrelated to crochet. This harks back to, and sheds light on, the patent granted to the passementiers in 1653 by Louis XIV for the production of thread “enhanced and embellished…on a crochet.” However, again, it rather curiously does not point toward the craft that was burgeoning elsewhere.

If it can safely be assumed that the crook-shaped tool Bayle-Mouillard illustrates was typical of those used for passementerie, its appearance in the 1785 description of what is unequivocally shepherd’s knitting, may be of some significance. It is widely accepted that the advent of modern crochet represents the fusion of hooked slip stitch closed work (shepherd’s knitting) and hooked chain-based openwork mesh (passementerie).

The tools used for them respectively are believed to be the strongly tapered shepherd’s hook and something resembling the significantly finer cylindrical tambour embroidery needle. As already noted, Bayle-Mouillard illustrates the latter tool. However, she never mentions its applicability to crochet as described by many other authors, including Leidenfrost — who reuses the plates from the French publication but removes the drawing of the crook from them.

The fact that Bayle-Mouillard never takes crochet-type structures beyond the braid stitch is significant in other regards. The rounded tip and crooked shape of her hook is not readily suited to reentering the loop in a crocheted chain once it has been pulled even moderately tight, as her instructions prescribe. In this light, and given that she presents the hook in the context of passementerie, calling it a passementerie hook seems justified.

We have no idea how far back shepherd’s knitting may ultimately be traced, but the strongly tapered and sharply pointed shepherd’s hook facilitates the production of slip stitch fabric. The “chayne lace” passementerie that appears in 16th-century wardrobe listings is likely to have consisted of free crochet-type chains that can easily be made with a passementerie hook. It may therefore be possible to see the 1785 instructions not just as the first documentary evidence of slip stitch crochet, but as something of a Rosetta Stone showing a link between the passementerie and shepherd’s knitting that were in the incipient process of merging to form the present craft of crochet.

How to make a flat braid on a crochet

This is a variety of knitting, or rather chain stitch, since there is no question about a new loop or stitch always being formed by pulling the thread through the preceding one.

It is started by twisting the thread between the thumb and forefinger of the left hand, as if wanting to make a double knot. The tip of the hook is then put between these two loops and another loop is pulled through them by grasping the thread from below and raising the hook to tighten it somewhat. We again put it [the hook] into the loop that we have just made and in the immediately preceding one, taking the following thread from below to make another loop or stitch, and do this repeatedly.

By fully understanding this process it is clear how, by varying the [forward] path of the hook and the interlacing produced when it is pulled back, we can produce many small works, which when joined to others with a needle, form all kinds [of passementerie]; olives, brandenburgs, tassels, etc. We also crochet a sort of mesh [crépine] that we put on the tassels of cord to embellish them. This mesh is a series of silk loops, gimped or non-gimped.