The History of Knitting Before Mass Production by Irena Turnau, published in 1991 (trans., Historia dziewiarstwa europejskiego do początku XIX wieku, 1979), includes a section headed “Knitwear in the Early Middle Ages.” In it she states that during this period, “in the Baltic countries…knowledge of…both knitting with two needles and crocheting is indisputable.” She supports the dating of crochet with an article from 1953 by Gabriela Mikołajczyk on “The origins of knitting in Poland” (Początki dziewiarstwa w Polsce). This illustrates a dozen flat hooks made of bone and horn that were recovered from 11th- and 12th-century archaeological sites in Poland. 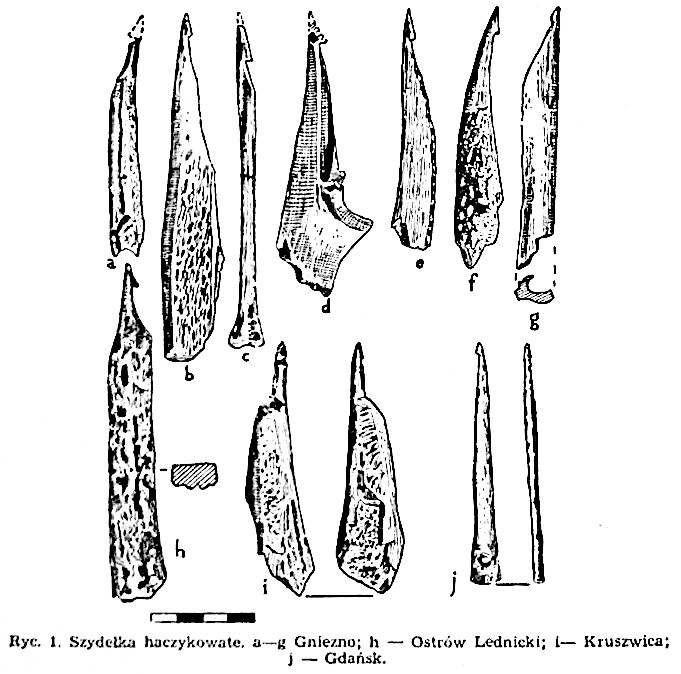 Despite their explicit labeling as crochet hooks and Turnau’s acceptance of that ascription, it might be tempting to regard these objects as having been intended for other purposes. However, they withstand direct comparison with later hooks that are known to have been used for that craft. This is readily seen with a Swedish flat hook made of bone for traditional slip stitch crochet (discussed in an an earlier post). Other exemplars of the same type are found in Swedish museum collections.

They all resemble the ones shown in Mikołajczyk’s drawing closely enough for there to be no way to dismiss the possibility of a functional parallel other than by the circular argument that since evidence of flat hook crochet does not appear until the 18th century, nothing before that date can be associated with it. The carefully thinned tip of the hook in the photograph additionally suggests use in a mechanically delicate context more than, say, as the barbed tip of a hunting weapon.

Several of the Polish hooks display the same design feature, and the evidence of crochet that Turnau saw in them cannot be shrugged off. The Baltic nexus that she also notes becomes all the more interesting in light of an additional cache of similarly configured implements on display at the National Museum of Denmark. 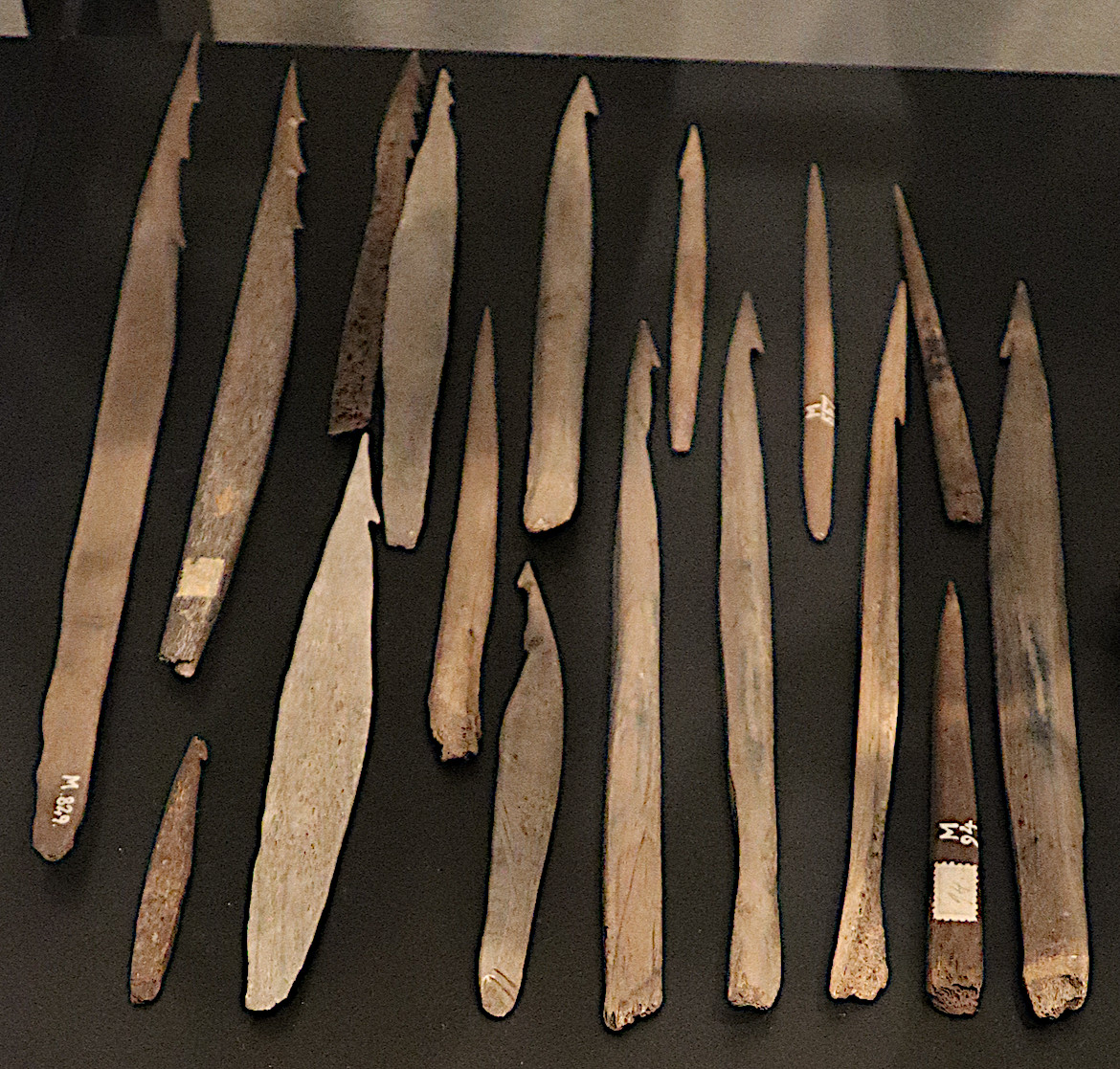 These hooks predate the recognized advent of flat hook crochet by an interval that eclipses the difference between the 11th and 18th centuries. They were recovered from the Maglemose site in Denmark, which dates from 9000 to 6000 BCE. The hooks are assumed to be hunting implements but, notwithstanding the prodigious leap in age, that attribution can be questioned.

Before proceeding, it should be noted that the oldest archaeologically recovered fragments of fabric come from the Nahal Hemar cave near the Red Sea and date from around 7000 BCE. A number of production techniques are represented including both simple and cross-knit looping. Eyed needles can safely be placed on the list of devices that can have been used for that looping.

It would be more of a rash conjecture to include hooked-tipped needles among the candidate implements. However, several museum collections include objects with the slip stitch structure commonly taken to indicate a hook-based technique, and have been associated with Egyptian sites from the 1st millennium CE.

No report of the scientific dating of even a single such piece has yet been published and almost all display stylistic characteristics that indicate a far more recent origin with near certainty. Nonetheless, it is entirely reasonable to anticipate slip stitch fabric being found in a reliably dated archaeological context that is old enough to necessitate the revision of accepted notions of the developmental chronology of the structures and procedures now identified as crochet.

The oldest known sewing needle — slender with a sharp point and small eye — was made at least 50,000 years ago and is not the only evidence of such tools approaching that age. We know absolutely nothing about when during the following 40,000 years they may first have been applied to the production of looped fabric, in addition to the putative initial purpose of joining separate pieces of the Paleolithic equivalent to yard goods.

A similar clock can be set for the flat hooks found in Europe, being made by the 6th millennium BCE, and their use for producing looped fabric as documented there during the latter half of the 2nd millennium CE. Just as the structural detail of the Nahal Hemar fragments intrinsically suggests the use of an eyed needle despite no proximal finds of such tools, the shaping of the Maglemose hooks indicate their applicability to forms of looping that can only be produced with a hook-tipped implement, regardless of both the absence of corroborating fabric and the utility of the tool in unrelated contexts.

In the post linked to above, I wondered whether the slip stitch described together with the flat hook in the earliest written sources was the only looped structure made with it. The question was raised on the basis of an 18th-century English cap in the collections of the Victoria and Albert Museum, which by all stylistic criteria would be taken as shepherd’s knitting (i.e., slip stitch crochet) except that it is made in double crochet (US).

That query is reflected in recent independent research into counterfactual evidence of the technology of looped fabric production in Early Modern Prehistoric Europe (in preparation for publication, with a full citation to be provided at a later date).

The Maglemose cache is analyzed in close morphological detail. The range in size between the largest and smallest hooks, and the disparity between their average length and that of later hooks, is explained by the need to accommodate similar variation in the available working materials. One of the experimental determinations is that the four multi-hooked implements at the top left of the photo are amenable to the production of what are now termed double, treble, and quadruple crochet stitches (US), with the same basic technique that is applied to the more familiar single-hook tool when making a slip stitch (which the earlier UK glossary alternately terms a “single crochet”).

This both permits and requires a more nuanced consideration of the stages in the development of hook-based looping techniques, as well as the associated stitch repertoire. The sequential addition of loops to an elemental slip stitch remains characteristic of the use of a single-hooked tool to produce successively taller crochet stitches. However, it now appears as though in earlier practice that dimension (also termed “post length”) may additionally have been set with greater economy of motion by dedicated tools with varying hook counts.

NOTE: This post initially appeared on April 1st and complies with the guidelines for loop-related humor issued by the Coalition for Responsible Loopography.

Wow! Fantastic research, what a wonderful news! Now we only need to find Neolithic crochet bag or hat to complete the analyse. Happy 1st of April 🙂

Interesting article. I remember your post about how you were reading early-20th-century reports and said if slip stitch crochet could be radiometrically dated to Coptic Egypt, that it would have seismic consequences.

Assia correctly noted that yesterday’s post did go to some April 1st excess. Nonetheless, the “chains in the air” that are the basis for all crochet can reasonably be seen as what is termed a “universal” structure. Such things can be expected to turn up anywhere and at any time without need to question how they got there. Hooks are even more clearly universal and, if anything, it’s surprising that crochet-type fabric is not evidenced far earlier than has as yet been determined.

Thank you for the clarification. I wasn’t exactly sure how to take your post.