From Penélopé 1823; the first of three variant forms of this purse:

“This is made on a turned boxwood mold, as fig. a. 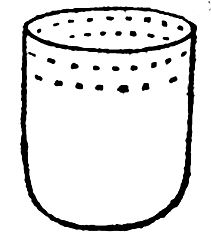 Holes large enough for a heavy needle are drilled through it close to its edge at 1.5 centimeter intervals. A second row of holes spaced 1 centimeter apart is placed a half centimeter below it. The mold should be 7 centimeters in diameter and 10 centimeters long. One can make three different purses on this mold. The first is in chenille, the second in gold or silver thread, the third in beads.

The first manner in chenille

Wrap a chenille thread around the mold over the second row of holes, fasten it as is shown in the pineapple style purse in Part II, no. 1 [earlier in the same volume]. Do not break the thread. Now fasten a thread of spun silver on the inside of the mold, thread a needle with it, and stitch it through the first hole. Wrap the chenille thread around the outside of the mold again. Make three simple looped stitches (festonneersteken) with the silver thread on the needle, between the second and third holes, around both the chenille thread that is fastened to the mold and the separate length alongside it. Proceed in this manner around the mold. Starting in the second round, the simple looped stitches made with the silver thread are placed around the middle of the thread between the first hole and the first stitch. Continue steadily in this manner. Mixing silver and blue like this is especially pretty and done so quickly that the purse can be completed in a single day. As the purse narrows below, if one continues in the same way, its bottom becomes almost entirely silver thread.”

The stitch pattern in this instruction may be difficult to visualize for someone unfamiliar with simple looping. The next two posts will illustrate it more clearly and explain some of the associated terminology.

This purse is one of six described in the source document. Five of them are illustrated on a color plate (explicitly captioned as being for five) but the instructions are incorrectly keyed to the images and don’t indicate which one is omitted. The author provides a subsequent correction that doesn’t mention Fig. A, leaving it to depict the Louisiana purse by default. However, none of the three variant forms of that purse resembles the illustration. This will be discussed in greater detail with the translated instructions for the first of the crocheted purses, which does closely match Fig. A.