The second of the three instructions for crocheted purses in the 1823 volume of Penélopé — a Charlotte-style purse in semi-openwork — includes structural elements that are not shared with any other craft. It therefore documents crochet in its present-day form without the latitude for discussion about classification that attaches to chain stitch mesh. That is the only structure in the preceding openwork purse but also appears earlier in other crafts. 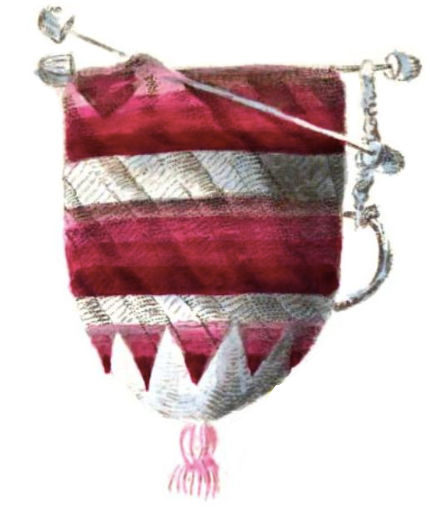 Sew the ends of a waistband together, of the width desired for the purse. Then sew 204 chain stitches along one side of it by stitching through the band with the needle from below to above and pulling the thread into a knot against it. Now hold the thread under your left thumb and stitch through the loop from which the needle just emerged, forming two further threads (in the band), and pull the thread through. This forms a loop on the band, and repeating this forms a kind of chain. These 204 stitches are the start of the purse. Now insert your left hand into it and hold the working thread in the right. Take a light shade of red for this. Make 6 à jour [chain] stitches, just as with the previous purse. However, the 7th stitch is made into the chain stitches, pulling the thread through that stitch and the newly formed loop. Proceed like this until the 12th stitch, continuing through the entire round, alternating 6 stitches crocheted à jour, and the following 6 crocheted as closed work into the preceding round. This creates work that is half open and half closed. Do four rounds of this with a very light shade, followed by another 4 with a second, 4 more with a third, and finally a further 4 with a very dark red or fourth shade. Crochet 6 rounds over this with silver thread (always à demi jour, half open and half closed) and repeat it all again. Then begin the star. However, this requires another stitch consisting of two colors that are alternately exposed and hidden. In the red areas the silver must not be visible, nor the red in the silver. For this one uses:

The thread you want to conceal is held straight out by the left hand, whereby it is worked under [the other thread] and thus becomes invisible. I am very much afraid here, that those who are entirely unfamiliar with this work will best understand it if they, as I myself who is making this description with a pen in the one hand and the work in the other, would also have the work in hand with the description in front of them, following it step by step.

Decreasing is self-apparent. Starting each time from one point in the star, work through two stitches instead of through one. For greater stiffness, sew a cord along the top edge of the purse, and so that there is no cupping, balance it with another into which you work eyelets through which the cord is drawn.