The last of the three instructions for crocheted purses in the 1823 volume of Penélopé — a Cinderella-style purse — introduces crochet that is worked in a flat spiral. This is in contrast to the cylindrical construction of the other purses considered thus far. A disc crocheted in this manner requires regular increases in the number of stitches in successive rounds in order to be kept flat. If these increases are placed at the same points in each round, as the following instructions specify and has since become the prevalent technique, they form a star-shaped pattern. For this reason, early descriptions often refer to this pattern and the disc itself as a star. The “half star” in the following text is one of two needed for the purse. 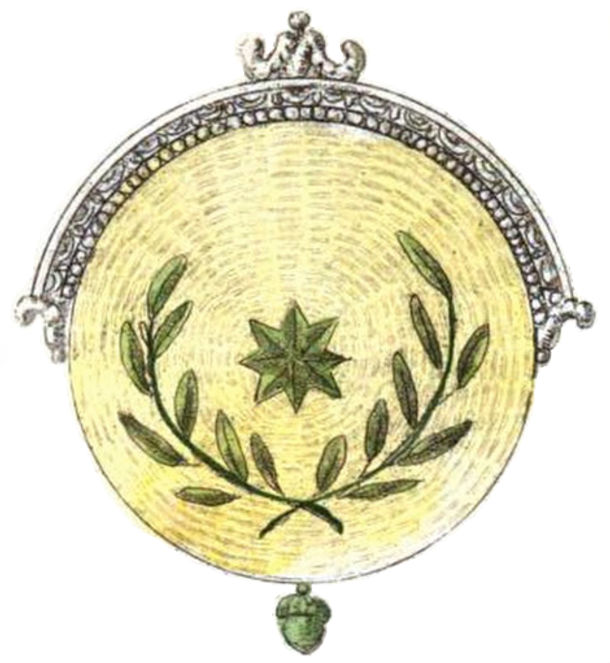 This is round and consists of two half stars made with the double stitch. It creates a beautiful effect in white silk with a garlanded star of silver, steel, or gold thread. Crochet 9 stitches in silver thread and close the round. In the second round, stitch through each stitch twice. In the third, increase again at every point [of the star]; and proceed in this manner until there are 9 rounds, or 12 if the thread is fine. Now the silver points are narrowed again with the white silk filling the spaces between them. After the [silver] star is finished, continue the increases from the second round, and frequently spread the purse out to test if it lies flat. Now work in a garland of silver thread, and a few straight lines, or dots at the very end. You must also carefully remember how many stitches you have increased, so that both sides can be made the same. When the purse is wide enough, divide it into 5 even segments, preferably marked with needles, of which 2 are enough for the opening. Make holes in them to stitch the cord through, or sew a cord onto them as with the Charlotte purse, or crochet a few semi-open rows through them. The rest of the two parts are crocheted together.