Knitted silver wire of the type found in the 9th- through 11th-century Viking hoards in England and Scotland (discussed in a preceding post) and at other Viking sites, has also been found in 9th-century CE Irish hoards of altar vessels. Two such objects are of particular interest. The Derrynaflan Paten is decorated around its circumference with three knitted tubes (seen in greater detail here).

The tubes appear to consist of shorter segments with slightly different appearances (and perhaps structures) joined together. One of the alternating elements was created by a gently spiraling band of silver wrapped tightly enough around the tube to press into it, forming a secondary decoration.

The paten is described in great detail by Michael Ryan in The Derrynaflan Hoard and Early Irish Art, published in the October 1997 issue of Speculum. He notes that the knitting around its outer circumference is soft enough to risk being deformed during normal handling (for which reason the hoard includes a separate support for the paten). He also states that “nothing later than the ninth century occurs in the find” but does not provide a more specific date for the paten.

It is currently in the collections of the National Museum of Ireland, which dates it to the 8th century, together with the more widely known Ardagh Chalice. On the basis of the shared intricacy of their decorative detail, the museum believes that both can have been made in the same workshop, which was presumably near the sites where they were recovered. Unlike the jewelry found at the Viking sites, where the knitting was the centerpiece, the Irish knitting considered here was a decorative component of larger elaborate objects that would in all likelihood have been commissioned by the churches where they were found.

The following detail from one of the two strips of knitting on the chalice shows the same compound structure as that seen on the Viking and Egyptian knitted tubes. It is formed by alternating rows of different-colored wires worked over each other. This is placed alongside plain open-loop knitting. The most noteworthy difference between the knitting on the chalice and all the other early knitting examined here thus far is that it was worked flat. 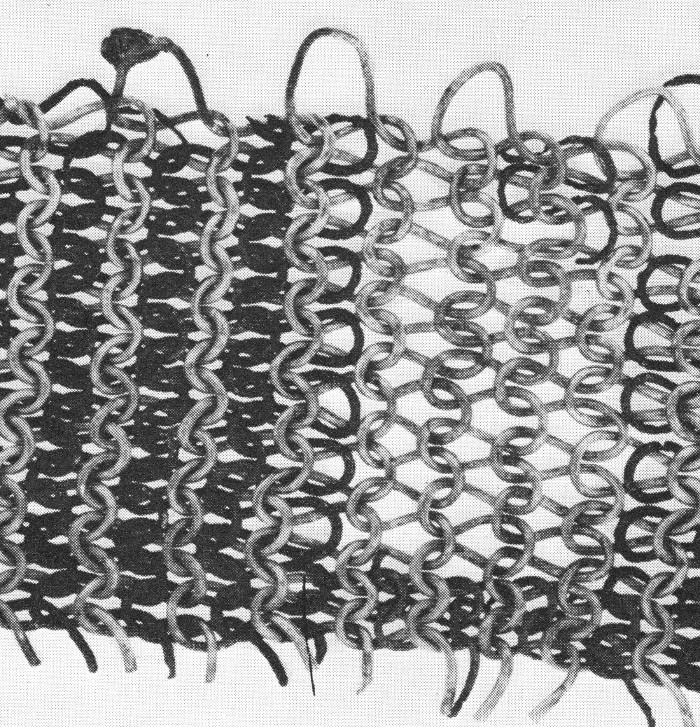 This upsets the established notion of knitting first having arrived in Europe at some time after 1000 CE, from its Egyptian origin, via Islamic Spain. There is convincing evidence of knitting in yarn having traversed that path, nonetheless, but knitting in wire was well established in northern Europe by the time it did.

There is no way to determine if the contemporaneous appearance of tubular knitting in Egypt and the northern European sites is coincidental, or provides yet another indication of cultural exchange between those communities. (Ryan includes a footnoted reference to the silver used for decorating Viking objects seeming “to have been derived in the main from Islamic dirhams with inscriptions in Kufic characters…brought along Viking trade routes to the East.”) Similarly, there is no way to tell if the Vikings introduced the craft to Ireland or picked it up there — assuming that’s the way it happened, at all.

The knitting found at all sites displays the same fundamental structure. The yarn used in the one region and the wire used in the other can be knitted with the same tools, although the working properties of the respective materials make some implements and methods better suited to the one than the other.

The Ardagh Chalice was examined in minute detail by the Conservation Laboratory at the British Museum during the late 1960s. A report about it was presented by Robert Organ at a seminar on the Application of science in examination of works of art, in 1970. This report was included in the published proceedings of the seminar three years later, titled Examination of the Ardagh Chalice — A Case History.

The preceding photograph shows a detail of one of the decorative elements on the chalice presented in that report. It is the less complex of the two strips of knitted wire. The other is significantly more intricate, with an additional structure woven into the knitting and the legs of some of the knitted stitches tracing an elaborate path through the work. This parallels the secondary device worked into half of the knitting on the Derrynaflan Paten. I’ll return to it when I feel surer about my ability to provide an accurate description. Puzzling that out will likely reveal more about the method of production, the basics of which I intend to discuss next.