Sergei Rudenko published a book in 1953, titled Culture of the Altai People in Scythian Times. It includes photographs of the structural detail of two pieces of “woolen lace fabric.”

They were taken from two tubular “braid covers” (shown fully below) with the one detailed on the left being an inner lining to the one on the right. The composite object was used as a sheath for the braided hair that had been removed from the skull of a woman in preparation for her interment in the grave where they were found.

An English translation by Michael W. Thompson, Frozen Tombs of Siberia, was published in 1970. This includes Rudenko’s revisions to the initial text and notes a subsequent radiocarbon dating of the tombs, setting their average age to 430 BCE. Thompson calls the tubular objects the “inner cover of pigtail” and “outer cover of pigtail,” and their structure “lace weave.” It is not clear why he regards this fabric as woven, which it clearly is not.

In her review of the history of nålbinding from 2012, Nalbinden – Was ist denn das?, Ulrike Claßen-Büttner notes that Thompson’s ascription was incorrect and says that the structure of the fabric “was presumably [vermutlich] twisted looping.” The English translation published three years later strengthens this to “obviously made by twisted looping.” The reasons for the increased surety aren’t explained but the photographs certainly do appear to be of loop-and-twist fabric, which is among the earliest archaeologically recovered forms of looping and has been found at a Neolithic site in Denmark.

This appraisal was not shared by Lyudmila L. Barkova in her article titled A technological characterization of woolen textiles from the Great Altai kurgans, in the 2013 volume (nr. 39) of the Archaeological Digest published by the State Hermitage Museum in St. Petersburg, Russia. (There is an English summary at the end of the article and a clickable list of its references here.) It includes full photographs of both objects. 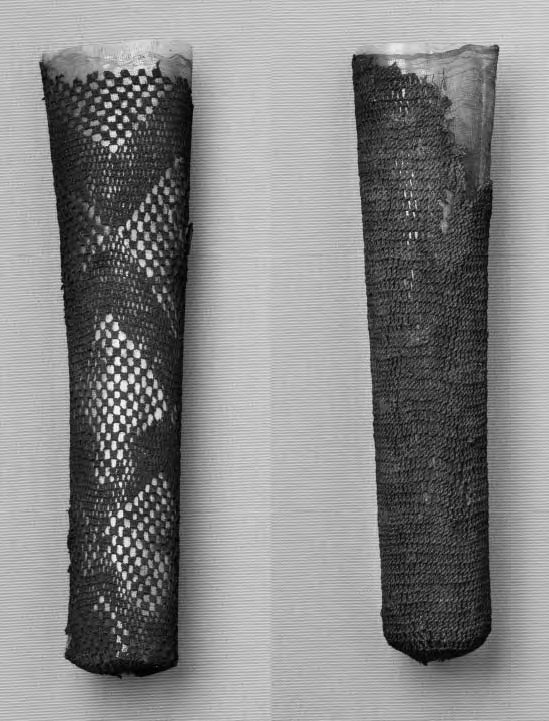 The text describes the structure and method of its production as crochet in the modern sense, but if for no reason other than a single structural detail visible in both her and Rudenko’s photographs, this is not possible. The joins at the corners of several squares in the openwork portion of the fabric are strained, revealing a single strand of two-ply wool (the material noted in the description) stretched across the gap. In crochet, the basic element of such work is a row of chains into which the vertical stitches are worked. It is not possible to pull this in any manner that would expose a single stand of yarn bridging adjacent squares.

The openwork outer sheath was on display at the British Museum from September 2017 to January 2018 in the exhibition Scythians: warriors of ancient Siberia, produced together with the State Hermitage Museum. The text accompanying the object said it was made at some time during late-4th and early-3rd centuries BCE and called it a “crocheted wool hair-case,” further explaining that “…other finds suggest that crocheted hair-cases were common among Scythian women in this region.”

The exhibition catalog describes the object in greater detail, but calls it a “woman’s knitted hair-case” and additionally referred to “crocheted netting” in one of the comparable other finds. The Russian word vyazaniye (вязание) designates all three crafts, with an additional qualifier used to distinguish among them. Barkova’s text, which is cited in the catalog, unequivocally describes the use of a crochet hook to make crochet stitches.

The structure of the object resembles crochet closely enough for it to be seen as such under the viewing conditions in the exhibition. While in front of the display case, I overheard other visitors comment with surprise about crochet having been practiced so long ago. This is unfortunate, given the opportunity to offset — rather than propagate — a misconception that has been sustained by many other examples of loop-and-twist (as well as simple looped) fabric in museum collections being misidentified as crochet. (This piece shares the additional distinction of having been identified elsewhere as sprang, a plaiting technique often enough applied to hairnets — but not to this one, as seen in the same structural details that preclude its having been crocheted.)

The decisive attribute noted above is readily apparent in the catalog photograph. 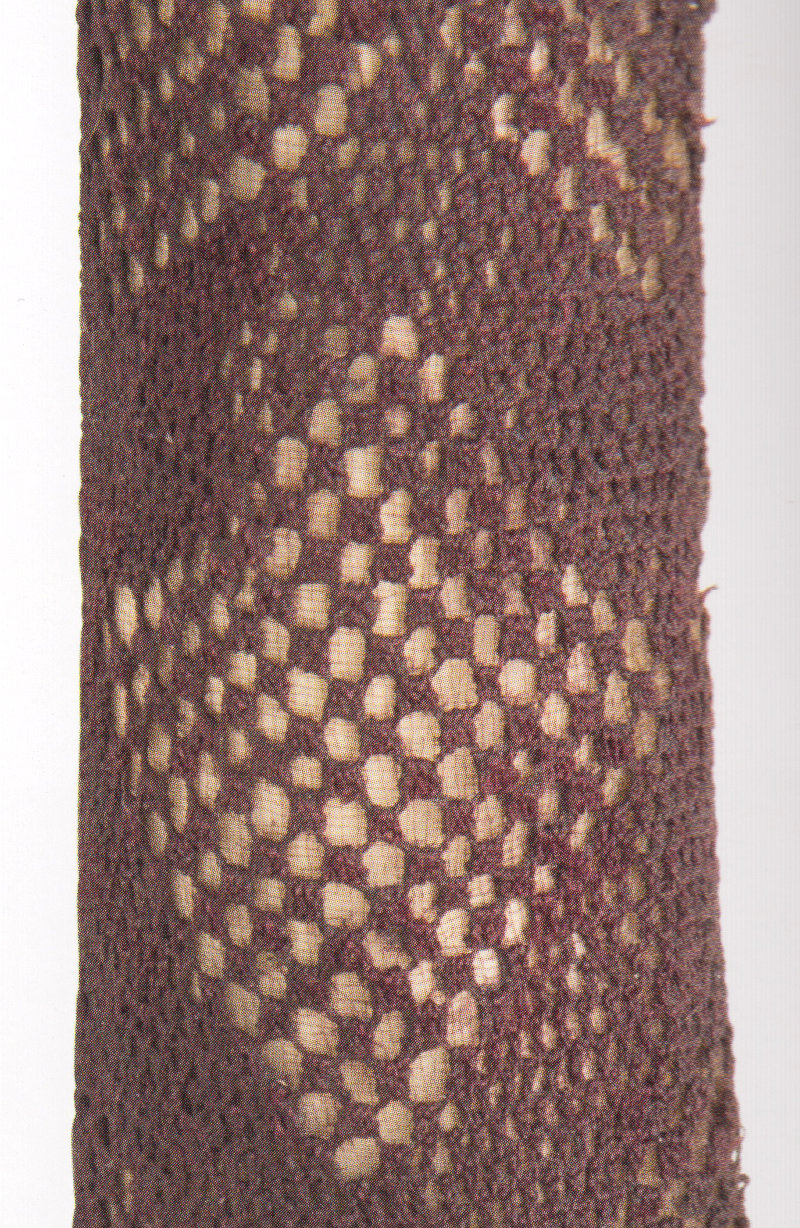 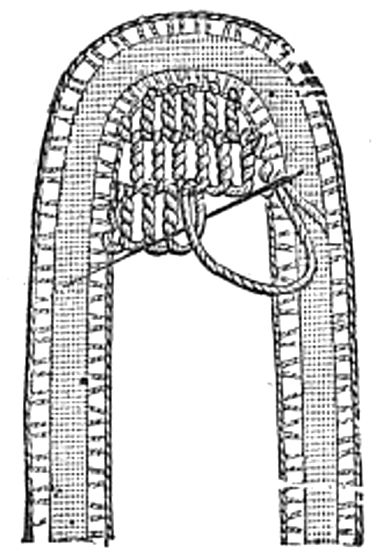 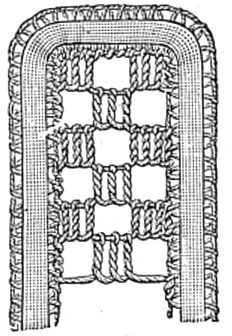 The individual stitches in the Scythian piece appear to have one or two fewer twists but the basic structure is identical. The tool used for its production would almost certainly have been an eyed needle, and such work remains a basic element of needlecraft (with the illustrations here taken from a text on needle lace from 1870). Considering both their structural detail and current trends in the ascription of historical craft identity, the braid sheaths would reasonably be categorized as nalbinding. In the doing, however, a spotlight is cast on the need for a nuanced terminology that distinguishes clearly between the various simple and compound looped structures that nalbinding subsumes.