Instructions for knitting tubes of thin metal wire on a small peg loom were published in 1822 in the Dutch periodical Penélopé. They describe a technique that is referred to in instructions for a loom-knitted purse that appeared in an 1823 issue of the same publication.

I’ll translate the wirework instructions extensively in a separate post but will note for now that they are for twisted-stitch knitting. There is no reference to the open-stitch alternative that appears in the later purse instructions, but those do say that the technique (currently termed flat stitching) works best with “gold or silver thread.” Such metallic thread was made by wrapping a thin ribbon of metal spirally around a core of silk thread. This had the appearance of metal but with the tensile properties of silk thread, and flexibility largely determined by the core.

The earlier wirework instructions also illustrate the pegged end of what appears to be a narrow cylindrical loom, specifically for making chains in fine gold wire. The technique described in 1822 remains in common practice and an array of tutorial videos can be found by searching on “spool knitting with wire” (using a common designation for a small peg loom). These show some variation in spool shapes and the way stitches are formed on them.

Having just conducted that exercise to make sure that it gives the intended result, I did find flat-stitching among the illustrated techniques, but also noted that it was knitted far more loosely than any of the Viking work discussed thus far. This doesn’t quite eliminate my concern about the potential risk of silver wire being damaged by the high intrinsic strain of open-stitch knitting on a peg loom, but it clearly does demonstrate the viability of at least looser forms of such work. The safest way to deal with this is by stipulating that a skilled loom worker can also knit wire into tighter open-stitch structures (but still reserving judgment about whether that extends to compound knitting).

The videos illustrate two ways of using a spool. In addition to lifting the stitches off the pegs into the hollow inside of the spool, it is also possible to form a wire tube along the outside of a cylindrical spool. The pegs then only serve as an initial anchor for the work, which is subsequently detached from them. The spool is repositioned along the tube as its length increases, to ensure that it maintains a consistent diameter.

The fundamental difference between the conventional use of a peg loom and that of an enclosed spool is that a fixed length of wire is worked around the latter by inserting its leading end into every successive stitch, and pulling the entire length of the working wire through it. This results in a twisted-stitch structure that is properly classified as looping, not knitting. Nonetheless, one name commonly given to such work is “Viking knitting.” Whatever significance the distinction between looping and knitting may have to the practitioners of these crafts, if any, it is fundamental to dating the advent of the latter technology.

An earlier set of instructions for looping wire without a supporting device appears in an issue of Penélopé from 1821. As with the invisible spool knitting seen in the preceding post, wire can be cross-knit looped into carefully controlled shapes without need for a support. Dramatic illustrations of this are seen in the work of Ruth Asawa, as here, here, and here.

Objects made with the same basic technique, albeit on a far smaller scale, were found in graves at the Viking settlement at Birka, active from the 8th through the 10th centuries CE near present-day Stockholm. This photo shows a fragment of one such piece. 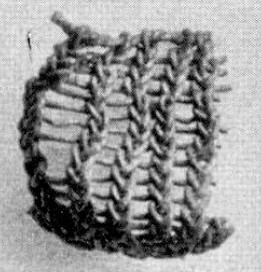 Another illustrates the compound structure that appears in many of the objects previously discussed here.

They are described by Agnes Geijer in a chapter on embroidery in the site documentation from 1938. This identifies six variants of cross-knit looping, four of which are illustrated with a needle pulling metal thread through an implied cloth support. Each of the other two variants is described as a length of wire worked into a simple or compound cross-knit structure by pulling its free end through each loop. 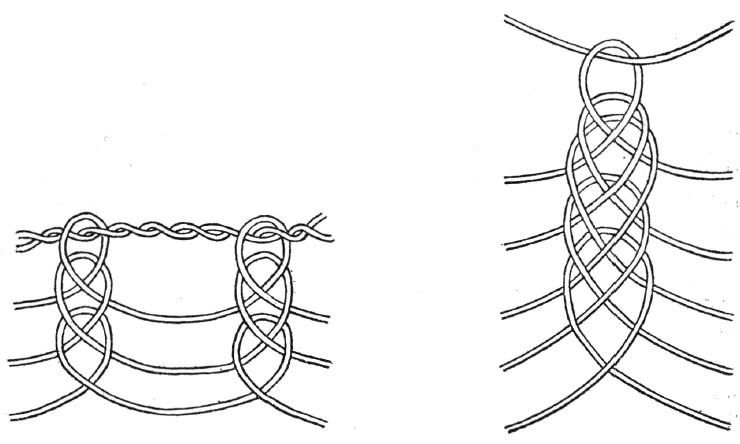 One of the important points Geijer makes is that archaeologically recovered wirework which appears to have been made to stand alone can initially have been worked into a textile support that has subsequently decayed. She does not discuss the possibility of objects with a cross-knit structure made free from a substrate being fashioned in any manner other than by looping. Nonetheless, it is clear from the open-stitch stockinette chains seen in previous posts — a structure that cannot be made by looping — that both knitting and looping were practiced by Viking wire workers.

Subscribe to this discussion
2 Comments
Inline Feedback
View all comments

Hi
I have thoroughly enjoyed reading these articles on the history of these techniques. As well, I have just spent a happy couple of hours following some of the links provided to discover such posts as pallia.net and others, somImam in heaven!

In the “looping wire” article in the 5th paragraphh, videos are mentioned. Is there a link somewhere to these videos? I have been trying to find a tutorial for making shapes using a method described in various posts using wire coiled around a dowel, formed into the letter “e” and looping them through each other without using a sppol or any other implements. I have tried and tried to figure it out but have only piles of curly wire all tangled up to show for it! If you can help, I would be forever grateful … Have been knitting and crocheting forever – carve mymown “giant” crochet hooks and 4-foot ling knitting needles – the latter being true madness!

I’m glad that you find this blog useful. The videos are listed at https://www.google.com/search?q=spool+knitting+with+wire&tbm=vid
The post at https://loopholes.blog/2017/10/31/knitting-metal-tubes/ includes a direct link to another video that you’d likely find interesting.