A previous post discussed several pieces of tubular knitting reported to have been made in Egypt during the 1st millennium CE. (Thanks to Matthew Pius for spotting the earlier studies and guest blogging their central details, summarized and commented on below.) One of the tubes had been radiocarbon dated to the interval 425–594 CE (in this test report) and is thus the oldest such object of substantiated age that has yet come to light. It is described by Dominique Bénazeth in an article titled “Accessoires vestimentaires dans la collection de textiles coptes du musée du Louvre” in a report from a conference in 2009, published in 2013 as Drawing the threads together; Dress accessories of the 1st millennium AD from Egypt.

The direct indications of this item having been made in Egypt are too weak to establish its provenance. However, its similarity to other knitted tubes that have a better-established Egyptian nexus — particularly one that is currently at the Museum of Byzantine Art in Berlin — was accepted as sufficient for grouping the Louvre piece with them. The Berlin tube is not clearly dated but is of certain geographic provenance and has been examined in greater structural detail. A report about it appears in an exhibition catalog from 2010 prepared by Klaus Finneiser, Petra Linscheid, and Meliné Pehlivanian, titled Georg Schweinfurth; Pionier der Textilforschung und Afrikaforscher. Their structural analysis concluded that it was likely to have been knitted on a peg loom, which is generally an efficient production device for tubular knitting. Since the Paris tube is both longer and narrower, the same method of production was assumed for it, as well.

The fabric structure of the Berlin tube is what a present-day knitter would call open (or uncrossed or untwisted) stocking stitch, albeit in a compound variant where each stitch is worked over the corresponding stitches in both of the two preceding courses (discussed and illustrated here). Loom knitters call this 1-over-2 (or double stitch) knitting. Its twisted “e-wrap” form commonly appears in stitch dictionaries of loom knitting, but descriptions of an open 1-over-2 structure produced with open “u-wrap” or “true” knitted stitches do not.

Compound knitting isn’t found in the established glossary of contemporary needle knitting but the structure appears in single-wale “false seams” worked with a crochet hook, such as Elizabeth Zimmerman’s phony seam (alternating 1-over-2 and 2-over-1). However, there is no particular difficulty in making compound stitches with ordinary knitting needles that justifies, much less necessitates, positing the greater utility of a knitting loom. There is no unequivocal physical or iconographic evidence of any of the candidate implements until significantly later than the production date of the Paris tube. There is also some basis for adding a circular needle to the speculative list of applicable tools.

An illustrated description of the needle-based technique was published in 1997 in a catalog prepared by Marianne Erikson titled Textiles in Egypt 200–1500 AD. It is part of the analysis of a fragment from ca. 1000 CE presented as flatwork but plausibly a segment of a piece worked in the round. That method of compound knitting was considered in further detail in a series of tutorial blog posts by Katrin Kania, in turn based on a workshop conducted by Petra Linscheid that examined the spool-based approach. A book recently published by Assia Brill titled Distitch, describes several needle-based techniques from the perspective of their contemporary application.

The photograph included in the Berlin report shows the compound structure from both the front and back of the fabric. The tube is not intact and several courses can be seen from the inside. The photograph in the report on the piece at the Louvre shows similar damage and reveals additional structural detail that might otherwise go unnoticed. Both tubes display the notable vertical compression of the individual stitches that is typical of compound knitting.

However, the second yellow band from the left in the lower segment in the following photo of the Paris tube has several stitches that are strained open and appear as though they might be looped into the immediately adjacent course only. The entire piece is close to two meters long and the full published photograph shows it in a serpentine position. The fineness of the stitching can be understood by visualizing the segments shown here as parts of a continuous tube of such length. If it is accepted that mistakes in this form of compound knitting can appear as ordinary knit stitches, there is no need for further explanation of the deviation in the lower segment. 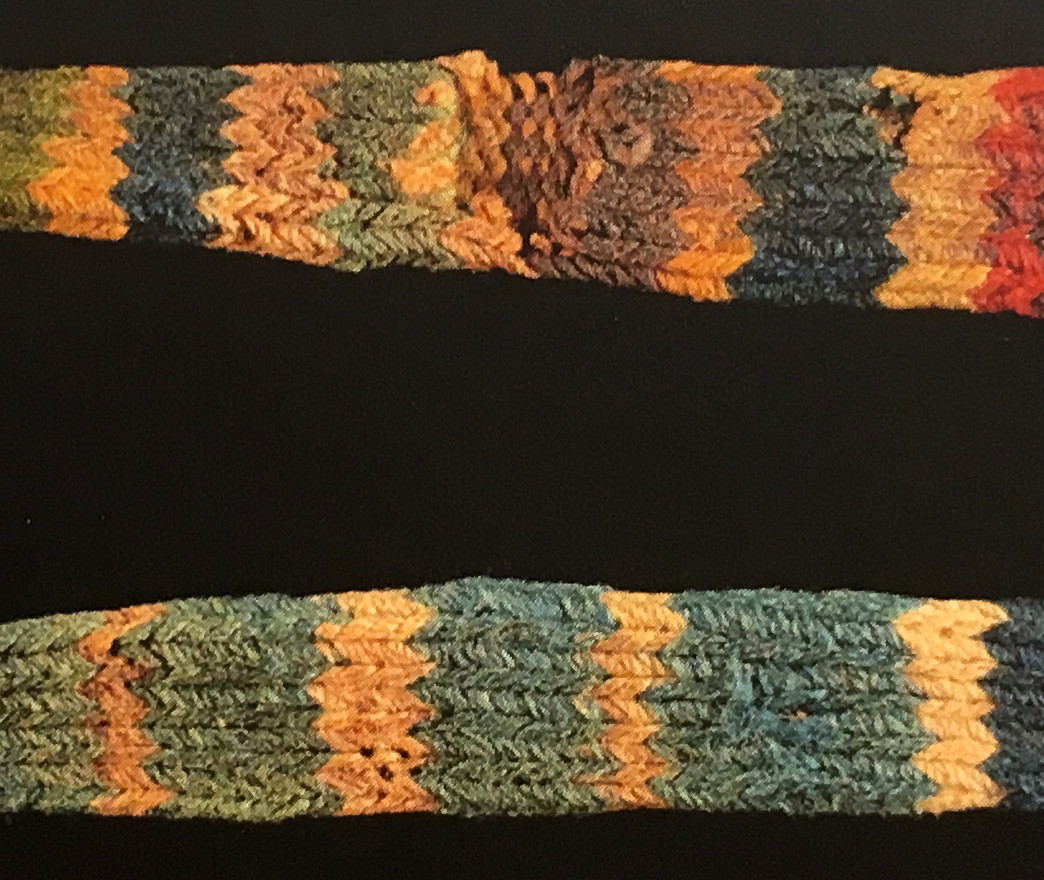 The Berlin report references additional examples of Coptic tubular knitting and other sources include still more. Both simple and compound stocking stitch are represented and the detailed examination of a larger number of samples would permit a more certain determination of the balance between the two types. Some of the tubes are also closed at one end either with a drawstring or decreases in the final few rounds of stitches. The analysis of those structures might also provide more specific detail about the technique(s) applied to their production.

Subscribe to this discussion
5 Comments
Inline Feedback
View all comments

HI! Thanks for looking into this further. It may be my eyes, or my screen, but I confess I can’t make out the details you’re describing in the photos of these tubes. However, I do think I can see what you’re talking about on the reverse side of the color change in the tube from the Louvre. What, then, do you make of Benazeth’s statement that this tube has the same structure as the one in Berlin?

The only inferences I noted her to have made on the basis of the Berlin tube are the possibility of both having been made on a pegged device, and their possible use as belts. If I’ve overlooked additional remarks about the structure of the Paris tube, please point me to them and I’ll comment in further detail. Otherwise, several stitches toward the upper right corner of the lower yellow band in the right-hand segment are strained open and (to me at least) show the same single-knit structure that is visible on the inside of the damaged part of the left-hand segment. The appearance of single knitting may also be a result of damage or a production mistake, so I can’t claim any certainty.

I know this is delayed, but I finally had time to pull out the article by Benazeth.
My translation of the relevant sentence, referring to the fragment in Berlin, is “Its technical study the observations made on the object at the Louvre.” The word she uses is “rejoint”, literally “rejoins” – there may be a subtlety to the language that I’m missing. I will try to check with a native speaker. She also refers to the fragment in Berlin as having “meme aspect, bien qu’il soit monochrome.” (the same appearance, except that it is monochrome).

Bénazeth uses the word rejoint to indicate the adjacency of Böttcher’s study to her own. She says nothing about the structure of the object at the Louvre based on direct observation beyond its physical measurements and that it is stitched in multicolored wool (formée en mailles de laines multicolores).

I’m not sure how much depth of detail can be read into même aspect. It is difficult, if not impossible, to recognize the difference between simple and compound stocking stitch from the front of such fabric. That’s why I took a really close look at both photographs. I’ve tweaked the text in the blog post a bit to clarify my observations. [ETA and have since tweaked it again.]

I’ve re-revisited all of this in light of comments from a friend with far greater knitting skills than mine, after hands-on experimentation with compound knitting. The blog post has now been edited to indicate that the structural details I had been wondering about do not contradict the identification of the Paris tube as compound knitting, which there are other indications of it being. So even if Bénazeth didn’t go into sufficient detail to avert my concerns, they were unnecessary.