The German publication Der Bazar (The Bazaar) figures prominently in a number of posts on this blog. This is due in no small part to the online availability of an almost unbroken series of issues from the outset of its publication through to the end of the 19th century. The inaugural volume appeared in 1855 and is one of the few not to be found in library catalogs but I’ve managed to acquire a printed copy (said with a fair amount bibliophile pride). One of what was to become dozens of competitors, Die Modenwelt (The Fashion World), commenced publication in 1865. As far as I have yet been able to determine, no library has a complete set and relatively few volumes have been digitized.

The business model of Der Bazar included the syndicated parallel appearance of its descriptions and illustrations of fancywork techniques in collaborating publications in several other countries. The same practice was adopted by Die Modenwelt, which listed the international editions on its masthead. 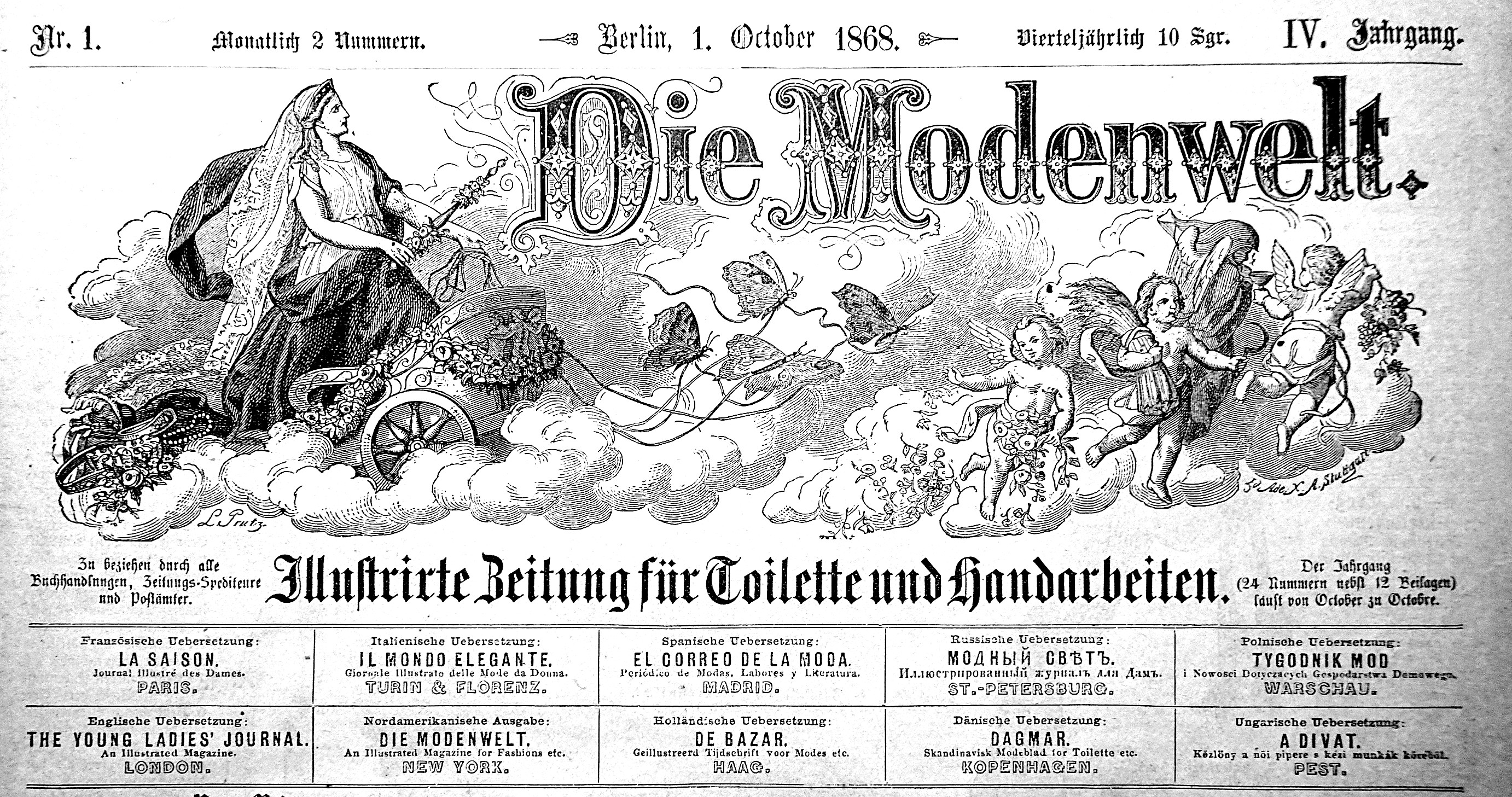 The title of the Dutch edition, De Bazar, suggests the possibility of an earlier relationship with the German Der Bazar that is probably worth further investigation. However, the present post only considers the English and Danish editions, which both lack indications of any such tie. As with many syndicated publications, the recipient venue was less concerned about advertising that relationship than the supplier was. The Danish translation, Dagmar, presented itself as Scandinavian rather than national. It used the masthead of Die Modenwelt, whereas the British The Young Ladies’ Journal (here from 1871) did not.

These publications were autonomous with regard to material of literary and general cultural interest. The syndicated fancywork instructions, although distributed to all licensed recipients, were used selectively at local editorial discretion and scheduled for release on the same basis. As with the parent Die Modenwelt, neither the British nor the Danish publication has been digitized comprehensively.

A history of knitting in Norway, Strikking i Norge (Knitting in Norway), edited by Anne Kjellberg and published in 1987, includes material taken from the 1 March 1881 issue of Dagmar. It illustrates and describes a circular knitting needle made of whalebone (fiskebeen, c.f. Fischbein). This is the earliest mention I have yet seen of such a tool, but it is presented as having fallen out of familiar usage over the preceding two generations rather than being an innovation.

This diffuse chronological perspective reduces the need for putting an exact date on its presumed simultaneous or earlier appearance in Die Modenwelt. However, the initial wording may differ in relevant nuance from that of the Danish translation and I am actively trying to locate copies of at least the 1880 and 1881 German volumes. The fancywork pages from the 1881 volume of The Young Ladies’ Journal are online but don’t include the circular needle. I haven’t yet found a copy of the cited issue of Dagmar for direct examination either.

Nonetheless, the written Danish and Norwegian languages of the day were extremely close to each other and the original instructions would have been fully intelligible to a Norwegian readership. The cited snippet appears in its original orthography in Kjellberg’s book, in what may safely be taken as a verbatim transcription.

“With a skirt in progress we illustrate the practical use of the circular whalebone needle, with which one can always knit very conveniently and even in the round. The needle may be familiar to as large a part of our readership as it is unfamiliar, since those who have not yet used such a needle may remember having seen their aunts or grandmothers with it earlier. In any case, the mere recollection of the existence of such a needle ought to be useful. Such tools are not only very practical for knitting in the round but also for larger objects knitted flat, since their circular design prevents the stitches from sliding off.” 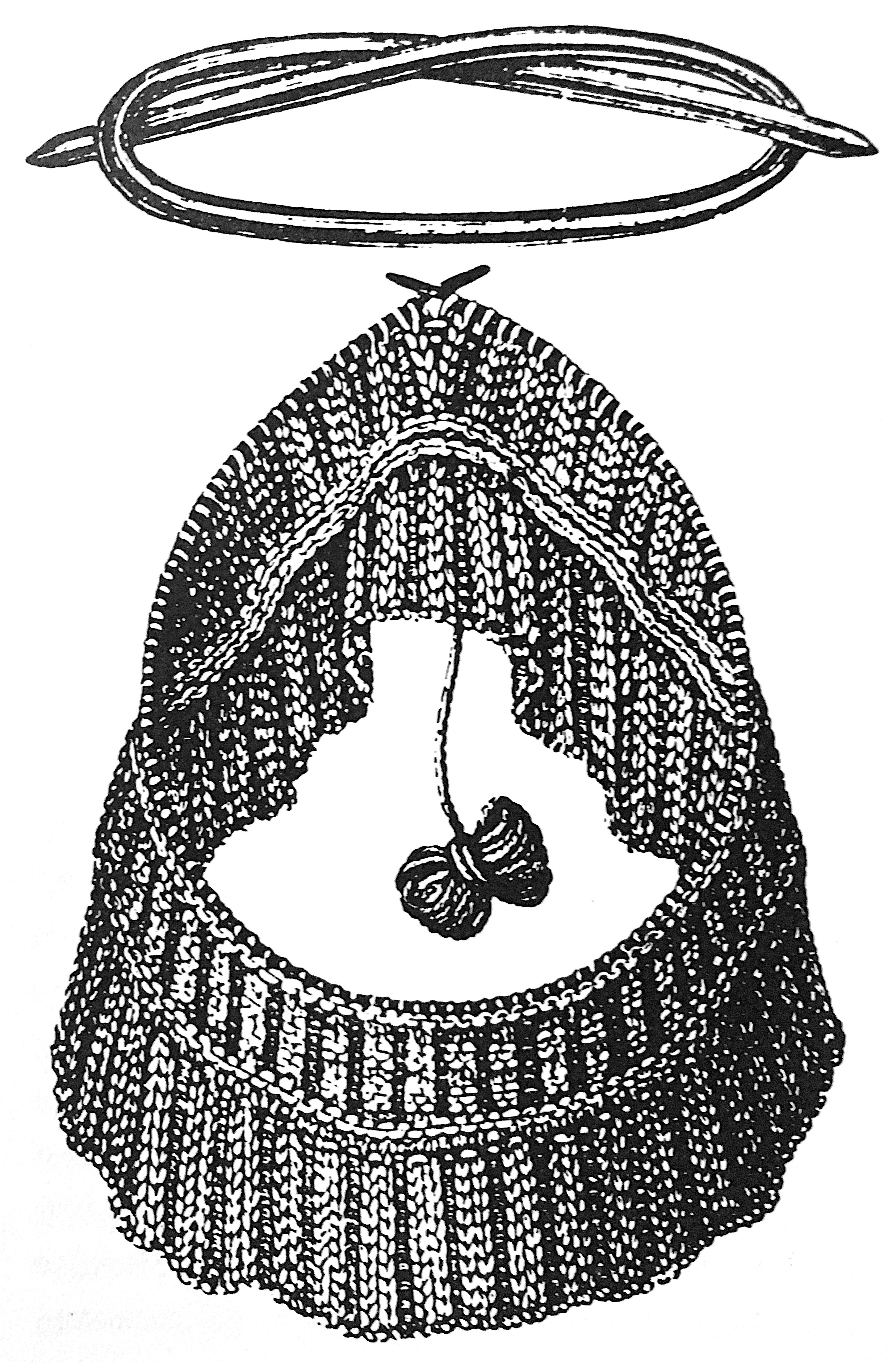 There is no other mention of this tool in the multiplicity of knitting instructions that began to appear in the 1840s (yet again, at least as far as I have been able to locate), which generally specify the requisite needles quite clearly. The 1881 reference to the circular needles its readers may have seen their grandmothers using harks comfortably back to the outset of the fancywork press. It therefore seems reasonable to conclude that the flexible implement had already lost whatever mainstream status it may have had by that time.

This raises an interesting question about the extent of its earlier use. It is not outside the realm of possibility that a long circular needle was used for the 18th-century petticoat of possible Dutch origin in the collections of the Victoria and Albert Museum (museum number T.177-1926). The shape of the garment matches that of the 1881 skirt well enough, and although the 3 meter circumference seems extreme, that factor besets all implements that can be suggested. (And is it really a petticoat?) 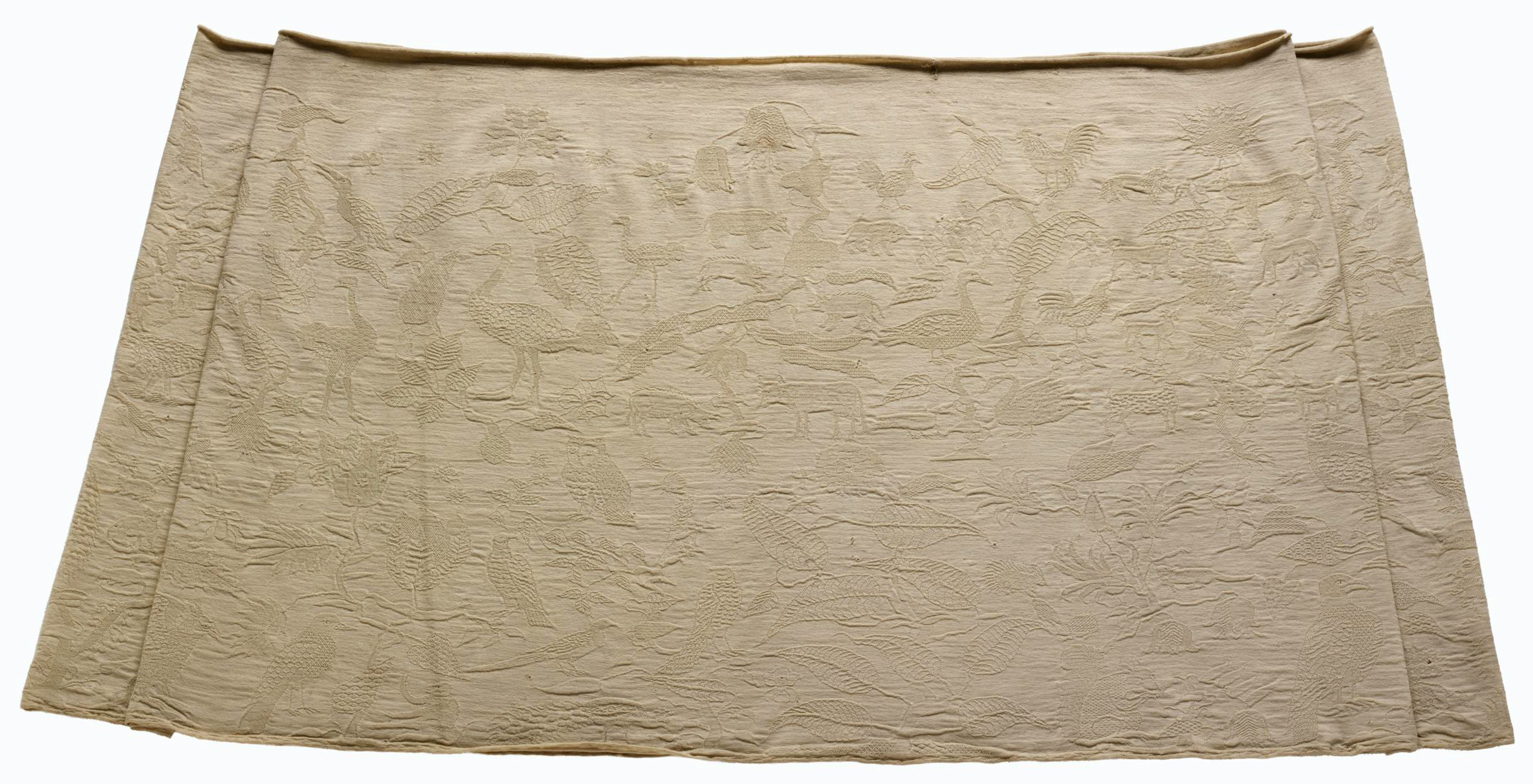 The situation is quite different with the tubular knitting at the core of the contemporary production of socks and traceable back to the unshaped tubes which had appeared in the Nile Valley by the 5th century CE. Knitters working in the round now debate the relative merits of straight double-pointed needles used in sets of four or five, against techniques using one or two flexible circular needles.

For as far back as baleen was available for such purposes (taken from what were previously known as “whalebone whales”), an arbitrary date cannot be set for when it can first have been fashioned into circular knitting needles. It may be sufficient to note that the hunting of whales that produce baleen began in Europe before the earliest evidence of knitting there.

The 5th-century tubes have been explained alternately as a product of needle knitting or peg-loom knitting, without any direct evidence of the contemporaneous availability of either device. There is no early direct evidence of circular baleen needles either but there was a thriving whaling industry in the Mediterranean Sea at the time knitting was being developed. Right whales were among those hunted and flexible needles made of baleen are as reasonable to place on the speculative list of candidate implements used by early knitters as double-pointed needles and peg looms are.

Other materials with similar mechanical properties were also available to the earlier workers. Comments on the initial version of this post discuss metal wire in particular. The questionable scalability of peg looms down to sizes commensurate with the narrow diameters of many of the early tubes and the fine-gauge stitching they share with the socks, would be less of a consideration with circular needles. The flexibility and strength of the selected material would determine the viability of a circular needle of a given cross-sectional diameter, but the tool has no potentially limiting mechanical intricacy.

Although material properties also apply to rigid double-pointed needles, they are not subject to the remaining constraints that have yet to be quantified for the other alternatives. This may explain both why double-pointed needles were the first of the various tools for hand knitting to appear in the iconographic record toward the end of the 14th century, and the preference for them in the 19th-century fancywork literature.