The January 1857 issue of Godey’s Lady’s Book includes the first in a series of “Full Instructions for Needle-Work of all Kinds.” It describes the basic elements of crochet and provides a good review of the mid-19th-century state of the craft. Without any indication of it being a recent innovation, an unillustrated and now unfamiliar “double chain-stitch” is included.

“This is a stronger and firmer chain-stitch than the ordinary one; and as it resembles braid, it is sometimes termed braid-stitch. When you have done two ordinary chain-stitches, besides the one on the needle, insert the hook into the first of those two, draw the thread at once through them both: then continue to insert the hook in the stitch just finished, as well as the loop on it already, and draw the thread through both.”

I’m still looking for earlier descriptions of it and am not entirely confident that the following drawing of the “double foundation” (doppelter Anschlag) in the July 1867 issue of Der Bazar is the first to have been published. It appears in an illustrated suite of crochet stitches that was reused in numerous subsequent publications — both in authorized syndication and otherwise — and the double foundation as it appears there can safely be seen as an archetype. 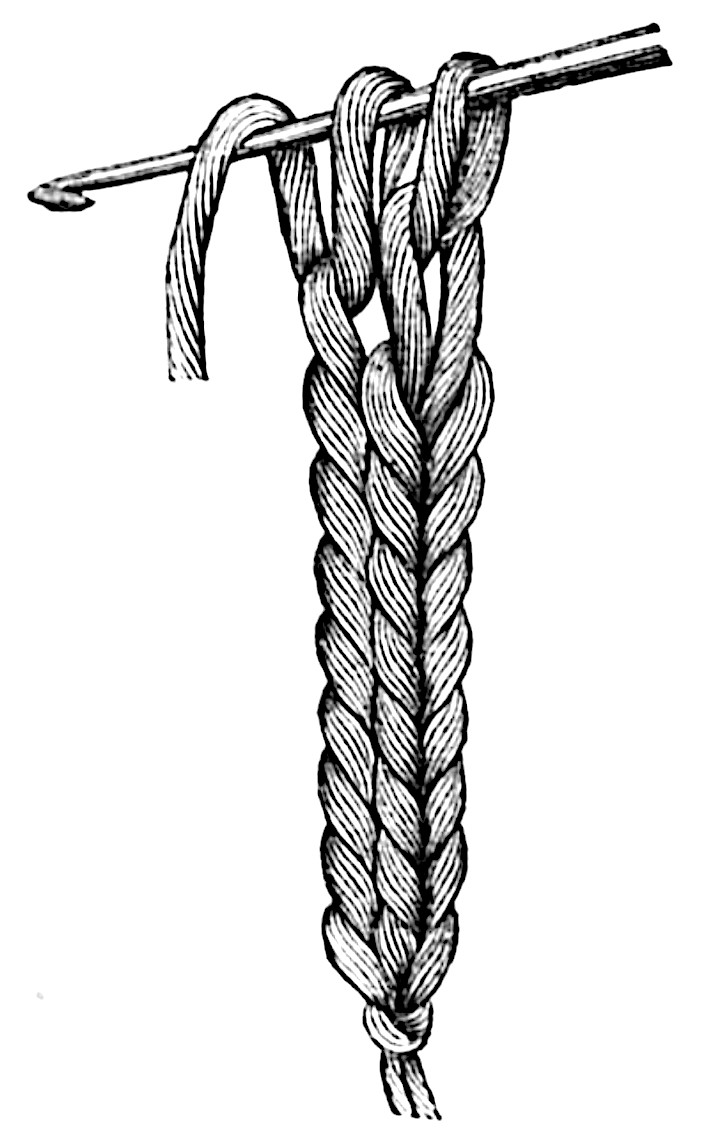 The repetition by other publishers is typified in Beeton’s book of needlework, from 1870, indicating that the double foundation was known to anglophone crocheters on both sides of the Atlantic. It is currently termed a “foundation slip stitch.” The drawing in Der Bazar shows it worked through the back edge of the anchor loop — the standard procedure of the day — and is fully consistent with the unillustrated instructions in Godey’s (and a legitimate technique in crochet intended for period reenactment).

In present-day usage, it would also be called a “foundation BLO slip stitch.” The process is demonstrated in a video here (which quickly shifts to working it under both edges of the loop as has since become customary). The early descriptions of the double foundation do not treat it as specific to the slip stitch — itself reasonably describable as a double chain. Crocheters presumably used it with any stitch they felt needed “a stronger and firmer chain-stitch than the ordinary one.”

This technique has recently regained currency after having gone in an additional direction later in the 19th century. The Dictionary of Needlework by Sophia Caulfeild and Blanche Saward, from 1882, again coopts the illustration and description in Der Bazar.

The Encyclopedia of needlework by Thérèse de Dillmont, from 1886 has its own illustration, more clearly showing the extension of the basic chain by the row of slip stitches worked into it. The accompanying instructions echo the previous ones but add a remark about the use of this structure as an element of crochet lace.

What is more frequently termed a “mignardise braid” is made separately, usually by machine, before being used as an element in a crochet lace edging. Its salient characteristic is a row of picots on both of its sides into which the crochet stitches are worked. It appears with other forms of “crochet braid,” sold by the yard, intended either for similar inclusion in crocheted lace or simply to be sewn directly together. 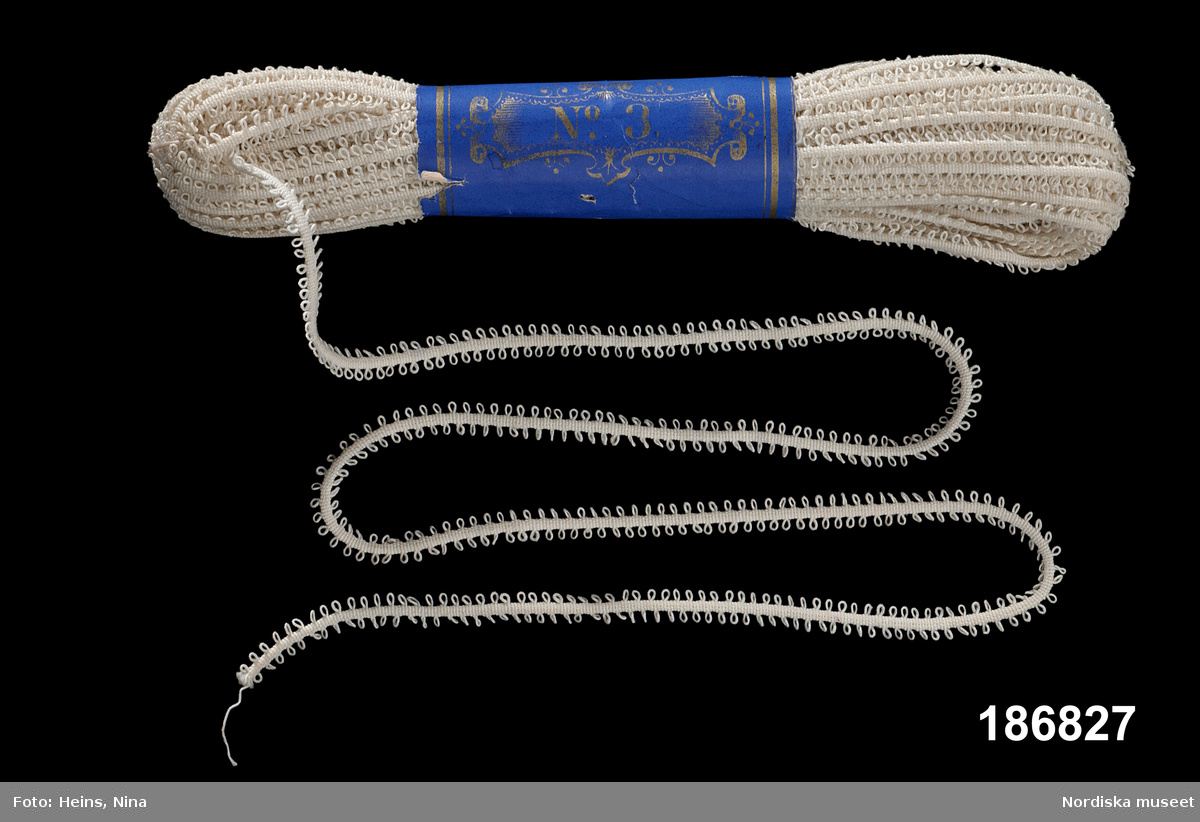 The August 1864 issue of The lady’s friend illustrates its use in instructions for an “Insertion for a Petticoat in Waved Braid and Mignardise.” 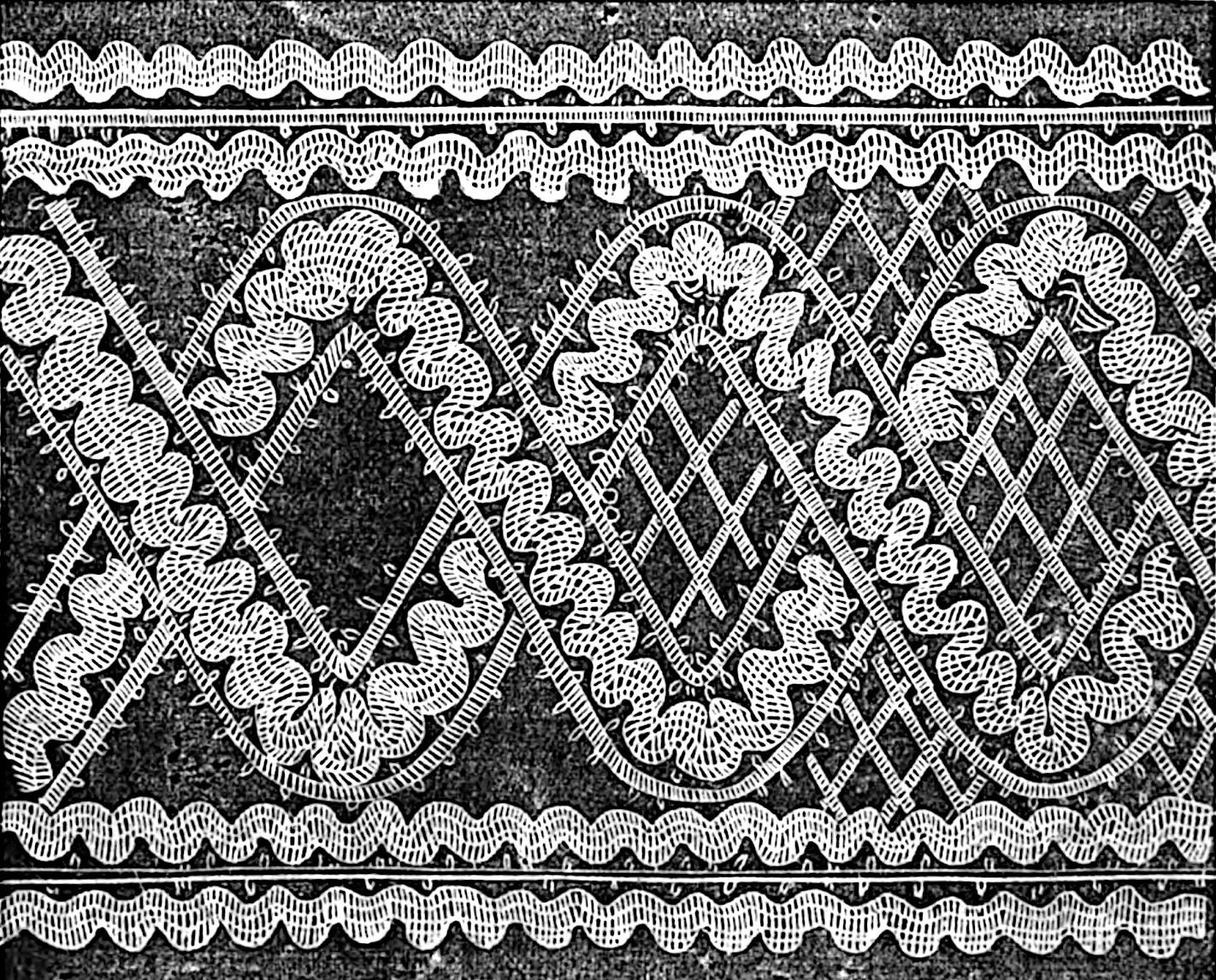 “Materials — Waved Crochet Braid, No. 5, and Mignardise or Cordon Braid Cotton, No. 24.… as some guide, we may say that it will take to complete one yard of the pattern about six yards and a half of waved braid, and seven yards of mignardise.”

The section of the Caulfeid and Saward article on crochet headed Mignardise says:

“This is a variety of crochet, formed by inserting a narrow fine braid into the design as the heavy part of the pattern that would otherwise have been formed by continuous stitches of Treble or Double crochet. The braid is woven less than an eighth of an inch in width…”

The Dillmont Encyclopedia includes instructions for “Crochet lace with mignardise.” 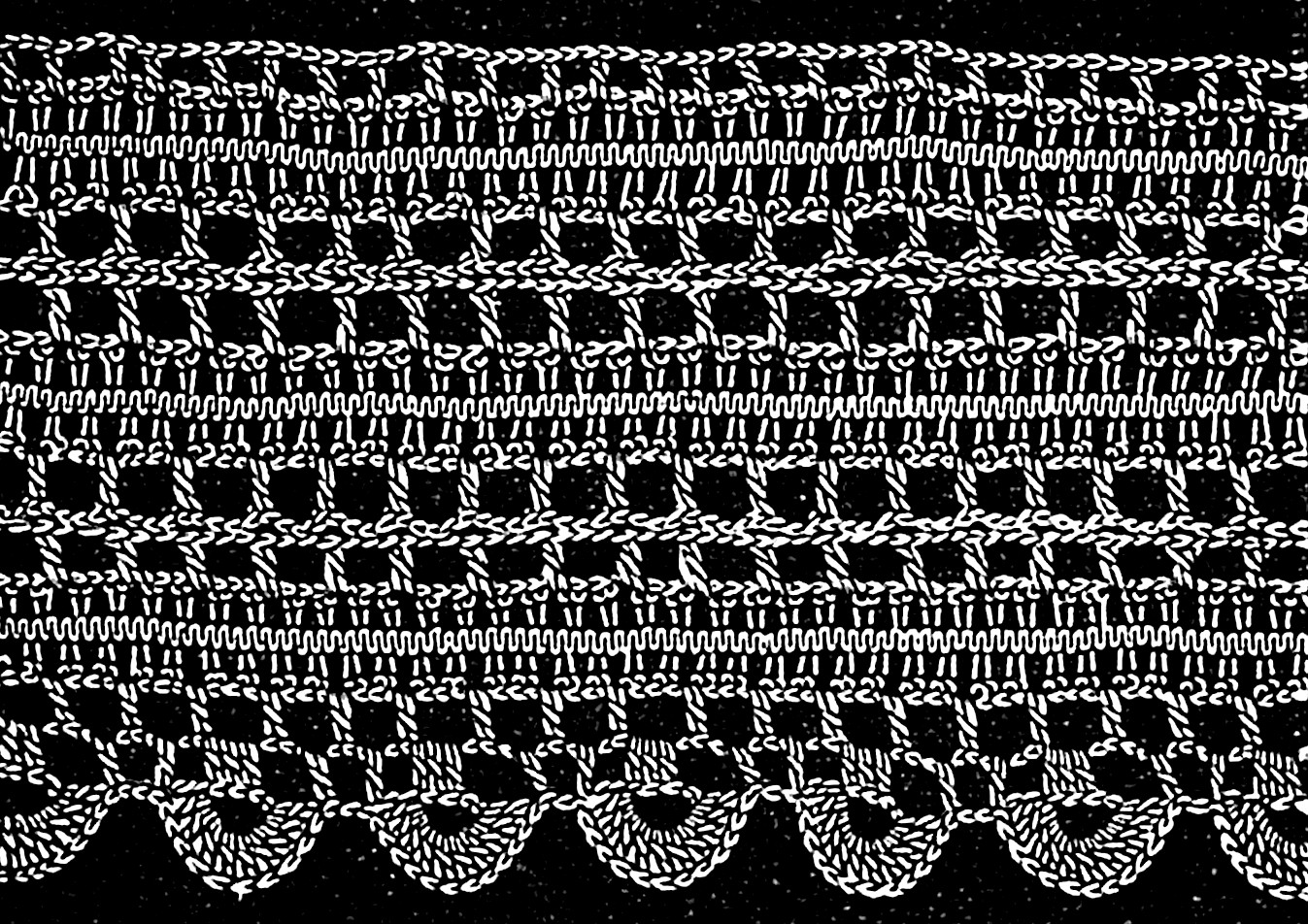 The size of the crochet thread is determined “according to the mignardise selected,” seen in the illustration as the wavy line with picots extending in both directions, to which bands of crocheted filet mesh are attached. This is not the repurposed double foundation Dillmont describes separately (and can additionally be seen as one of many types of crocheted cord). However, she explicitly states that to be “very good mignardise” and would presumably have accepted the substitution.

A five-part Crochet Series, was “compiled and edited” by Marie Louise Kerzman in 1883. The first booklet is titled How to Crochet and includes yet another unattributed review of the double foundation and other crochet stitches originally appearing in Der Bazar. The fourth booklet on Fine Crochet Work describes a number of crochet edgings that incorporate various types of prefabricated braids in crocheted lace. The mignardise appears in several of them as “feather-edge braid,” juxtaposed in this illustration with a central band of “medallion braid” to form a composite lace insertion.

The final part of the series, Maltese or Hair-Pin Crochet Work, deals with the crocheted production of borders, insertions, fringes, and tassels without any type of separately manufactured braiding. Kerzman says of the technique from which she took the title:

“This kind of work, formerly known as Maltese Edging, and now generally called Hairpin Crochet, consists of a narrow braid, worked on what were called Maltese pins. These pins were of various sizes, according to the coarseness or fineness of the cotton used for the edging. Yet, as the term Maltese has practically died out, it is doubtful whether the special pins can still be had. A long hairpin, however, will answer the purpose as well.”

As with the multi-pegged moule Turc and Tunisian crochet, the Maltese pin may suggest a Mediterranean origin (It would be something of a coincidence for them all simply to have been given fanciful names). In any case, all three techniques involve the use of a hook, lending credence to the general notion of the earliest knitting needles also having hooked tips, which followed the craft on its putative migration from the Nile Valley along the Mediterranean coast into eastern and western Europe. Here is one of Kerzman’s illustrations of the preparation of the braid.

The least ornate of its various appearances in crochet lace treats it as a large-loop variant of the mignardise, albeit entirely crocheted, as is the braid stitch that Dillmont says can be used in the same basic manner.

The compilation of crocheted borders, fringes, and tassels in which it is presented could as easily appear in the context of passementerie. This harks directly back to the patent granted to the passementiers in 1653 by Louis XIV for the production of a variety of items made with a crochet and on different supporting devices. The use of the hook to make chains is included unequivocally in that listing.

This supports the belief that the “chayne lace” bordering that appears in wardrobe inventories beginning in the mid-16th century was a direct precursor of openwork crochet. The descriptions of separately crocheted braiding intended for modular inclusion in more elaborate lace trimming, suggest that the hooked craft practiced on the 19th-century worktable may have even richer ties to the earlier passementerie.