The preceding post discussed alternate production methods that can have been used for the compound knitting seen in early Egyptian tubes. The same technical considerations figure prominently in discussions about the large knitted carpets that were made in Germany during the 17th and 18th centuries in partial fulfillment of guild requirements for certification as a master knitter. The collections of the Victoria and Albert Museum in London include a frequently illustrated exemplar made in 1781 (museum number T.375-1977). The online database indicates its size as 193 cm high and 174.5 cm wide but other of the museum’s publications state it to be 163 cm square. 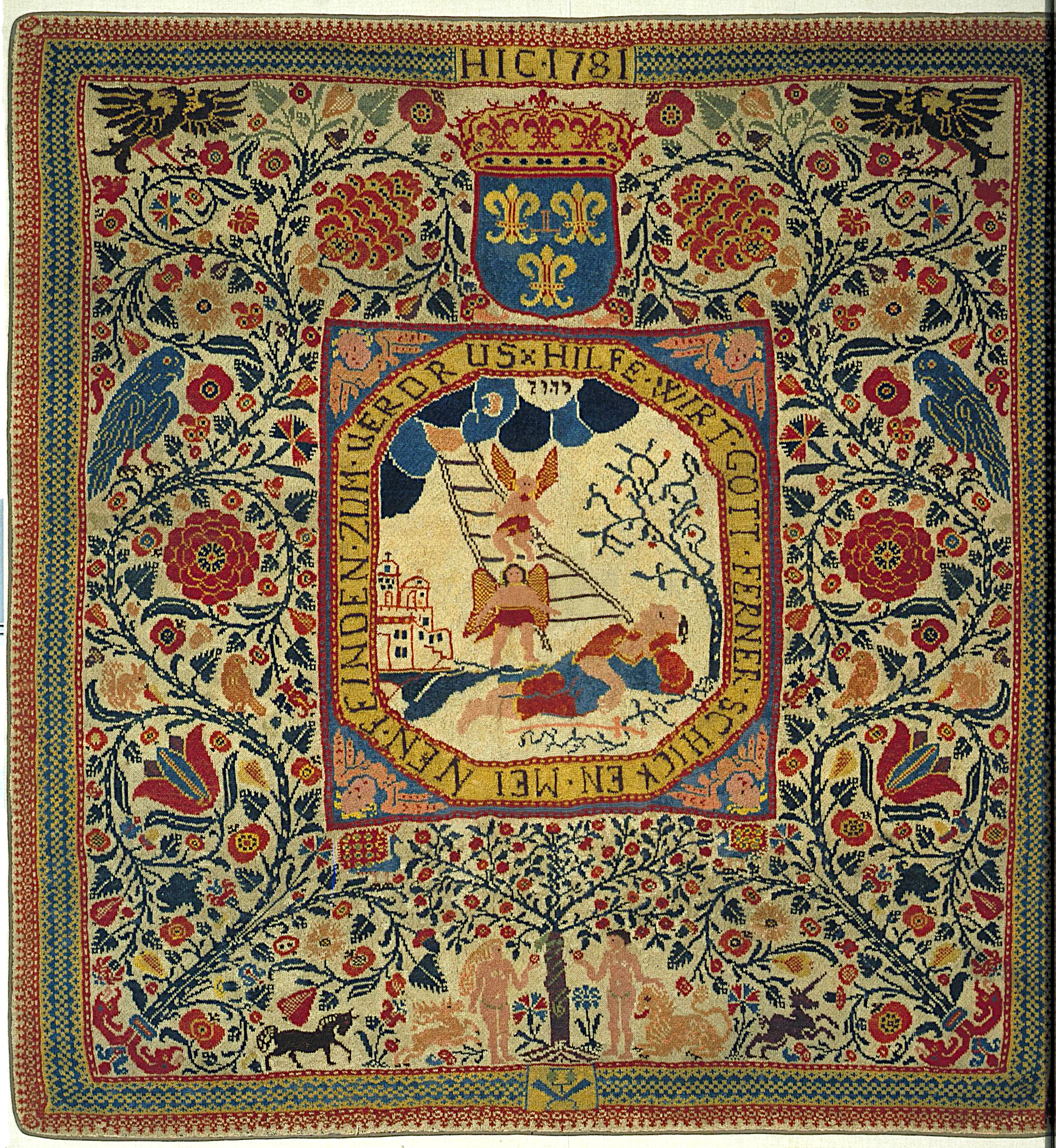 I’ll discuss the discrepancy below but suspect that the rectangular dimensions are of the carpet prior to restoration. 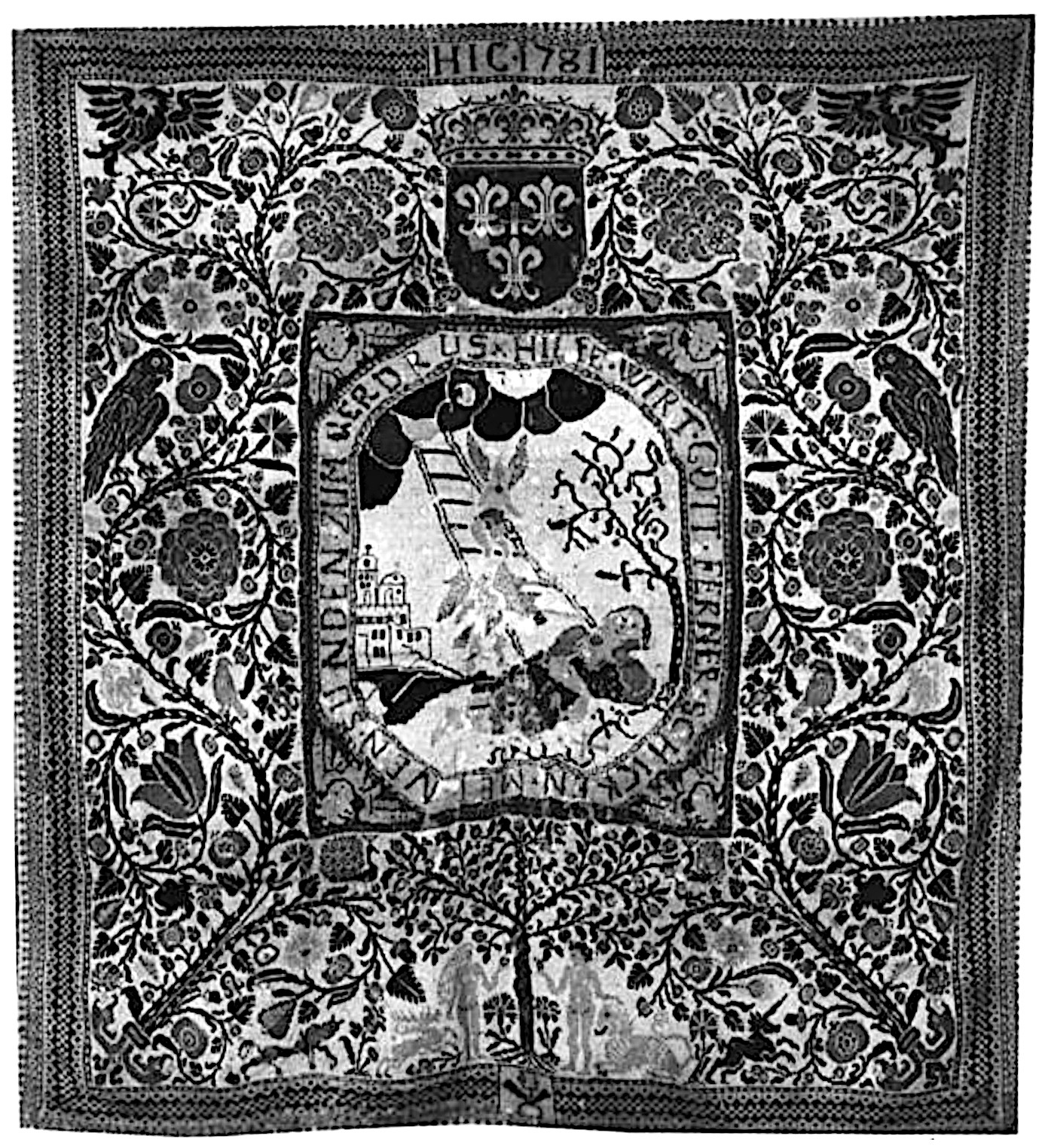 Different scaling constraints attach to the implements that can plausibly have been used for the respective manufacture of the tubes and carpets. However, double-pointed knitting needles and peg looms have been variously suggested for both. Although the tools used by the early workers can only be deduced speculatively from extant fabric, those employed by knitters in 17th-century Germany are better understood. In fact, one of the decorative motifs that appears in the guild masterpieces shows shears and a pair of teasels mounted in a holder (the latter seen being manufactured in 1545). 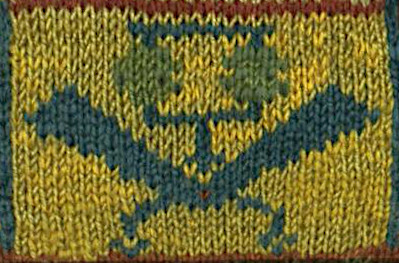 In a seminal description of 29 carpets (the one at the V&A is no. 16), Irena Turnau and Kenneth Ponting make the observation that “it is strange that there appears to be no representation of knitting needles.” This remark appears in their article “Knitted Masterpieces,” published in 1976 in the journal Textile History (vol. 7:1), where they also suggest a pegged knitting frame as a non-exclusive alternative.

“Finally, to turn to the way in which these knitted masterpieces were made. It is a difficult problem and the views expressed here are very tentative. [In an article from 1924, Karl] Masner quotes the opinion of a technologist who argues that these works were made with stocking stitch on two needles without any additional tools, as for example the frame. This could be, but it would prove difficult, especially with such large and heavy works of thick yarn even if the two needles were each two metres long. Consequently, we think it possible that three or four needles were used — only of course to hold the stitches since it was flat stitching. This is difficult to prove because the method of keeping the stitches on several needles does not show in the final product. On the other hand, a quite different method could have been used utilizing a kind of frame fitted with pegs. Both methods may have been used.”

Subsequent studies of the carpets echo Turnau’s and Ponting’s assessment of the production method(s). A booklet by Frances Hinchcliffe titled Knit One, Purl One, published by the V&A in connection with a temporary exhibition on display from October 1985 to Summer 1986, says of the one shown here:

“This carpet or hanging, which measures approximately 163 cms square, is of multi-coloured stocking stitch made on needles, or possibly a peg frame.”

This size is also given by Turnau and Ponting but differs from the 193 cm height x 174.5 cm width in the V&A database. Sandy Black also states the carpet to be 163 cm square in the museum’s publication Knitting: Fashion, Industry, Craft, from 2012, but notes further that it is “knitted at an unusual square tension of 8 sts and 8 rows to 2.5 cm.”

The second of the photographs above also appears in the Emery and Ponting article, and was taken while the carpet was still in the possession of Eric Pasold (1906-1978) who gave it to the V&A. It appears to have been restored at some intermediate time and its initial rectangular aspect suggests that it was brought to the present square shape during that work. The measurements in the online database may therefore be of the carpet in its initial state.

Since Emery and Ponting list its present dimensions, the restoration would have been completed before they wrote their description, but they illustrated it with an older photograph nonetheless. The noteworthy square stitch tension reported by Black may therefore initially have had unremarkable proportions.

Richard Rutt restated the earlier suggestions about the how the carpets may have been produced in his A History of Hand Knitting, from 1987.

“It is not impossible that they were made on a series of double-ended pins, but more likely that they were looped on a frame fitted fitted with pegs.”

The same appraisal cascaded into the popular craft press in the March/April 1995 issue of the magazine PieceWork, with an article by Janet Johnson Stephens titled “Knitted Carpet Masterpieces of the Holy Roman Empire.” This includes a sidebar report by Jane Fournier on “Peg-Frame Knitting: Experimenting with Historical Techniques.” The earlier descriptions of the carpets make no mention of alternatives to stranded colorwork, typified by Sandy Black’s description of the V&A carpet “using many colours of wool stranded across the back.”

Regardless, Fournier also tested intarsia and explored the possibility of the carpets having been knitted in the round. However, that approach “produced the worst yarn snarls of the experiments” and this abridged quotation from her report is limited to the flatwork options.

“A peg frame lends itself to stranded knitting because it lets the knitter keep a consistent tension on yarns stranded across the back of a piece of colored knitting. However, the complex designs and large number of colors in each row of the carpets creates a very bulky knitted fabric with many long and vulnerable floats on the reverse.

It’s also possible to execute intarsia-style colored knitting on a peg frame, but once again, duplicating the complexity of the design and number of colors in the masterpieces is almost impossible. For a single layer of flat knitting, you can work multicolored designs back and forth, twisting each color with the next color in the row to prevent holes from forming where each color meets another, somewhat like tapestry weaving. Borrowing the tapestry weaver’s habit of keeping each length of colored yarn on a separate bobbin may ease the tangling, but the bobbins would still be awkward to manage.

These simple trials do little more than tell us what challenges may have been faced by knitters creating their carpets on a peg frame. Whether created on a series of double-pointed needles or on a peg frame, the challenge of the work was considered sufficient to make the carpet one of the works on which the knitter’s mastery of his craft would be judged.”

In fact, instructions for using a series of double-pointed needles for knitting large multicolored objects, including rectangular floor and furniture coverings, were written in the late-18th century by Johann Friedrich Netto. He published them together with Friedrich Leonhard Lehmann in Die Kunst zu stricken in ihrem ganzen Umfange (The art of knitting in its full extent), in 1800. I’ve included translations of several of the instructions appearing in that text in previous posts and plan to do the same with the ones relevant to knitted carpets.

Netto makes no mention of the masterpieces but the tools and procedures he discusses are directly applicable to them. In brief summary, he prescribes the use of as many double-pointed needles as are needed to hold the entire working edge of an object. The largest number he mentions explicitly is 16. If that number is used to form a continuous straight support for a 2 m wide carpet, there would be 50 stitches on each needle at the 10 per 2.5 cm density of the one at the V&A. His instructions for a child’s chemise made in the round from the hem up start specifically with 16 needles, each holding 56 stitches.

Netto describes several methods for multicolored knitting. The one best suited to the carpets uses as many separate balls of variously colored yarn as appear purposeful. Each is fastened to the starting edge of the work and taken on the needle as the pattern requires. The floats on the back of the object are captured at their midpoints.

“The knitting is always worked from right to left. It is self-understood that rows will always alternate between one that is properly knitted and one that is purled.”

This method can be characterized by the unwieldiness that led the authors cited above to suspect that a peg frame might have been seen as a more convenient alternative. However, it should be kept in mind that guild masterpieces were intended to demonstrate consummate skill and not designed to avoid technical challenges. Given that Netto describes contemporaneous practice, pending the location of comparable eyewitness reports, the techniques he describes arguably set the benchmark.

The preceding post documents a potentially suitable pegged knitting frame in guild use. However, it predates the advent of the mechanical stocking frame, which spawned separate guilds of its own, and there is no direct evidence of the reemergence of peg looms until after the guild system had lost its sway.

Is it just a coincidence that your post preview looks like an alien holding a pair of giant knitting needles, or did you mean to do that ? 😄

Turnau is pretty clear about knitting needles not being found among the decorative elements in the carpets. So if there is an alien nexus, the details you’re referring to would more likely be appendages — perhaps wings?