The 1823 issue of the Dutch monthly publication Penélopé (cited in several previous posts) describes how the yarn is held for crochet, placing it in the same hand as the hook.

“For this one needs a tambour needle, with a small hook at the front…. This is held in the right hand, along with the thread being worked, about as though one were knitting.”

More detail is added in an issue from 1833, including an illustrated reference to a form of flat hook known to have been in use for slip stitch crochet at the latest by the 1780s.

“The needle, or hook, is held like a knitting needle in the right hand. Just as with knitting, the thread [is held] around the fingers, so that it rests on the first finger and is wrapped around it. The work itself is held in the left hand very close to the hook, but still protruding above the finger. For coarse work in silk or thick knitting cotton, one uses a copper hook of this form…”

The alternative of “a fine so-called tambour needle” for other work is then repeated.

In contrast, the earliest British publication that “shows the position of the hands, and the manner in which the needle and the work should be held” for crochet, My Crochet Sampler, from 1844 by Frances Lambert, illustrates the hook in one hand with the yarn and work in the other. This placement has remained in common practice through to the present day. 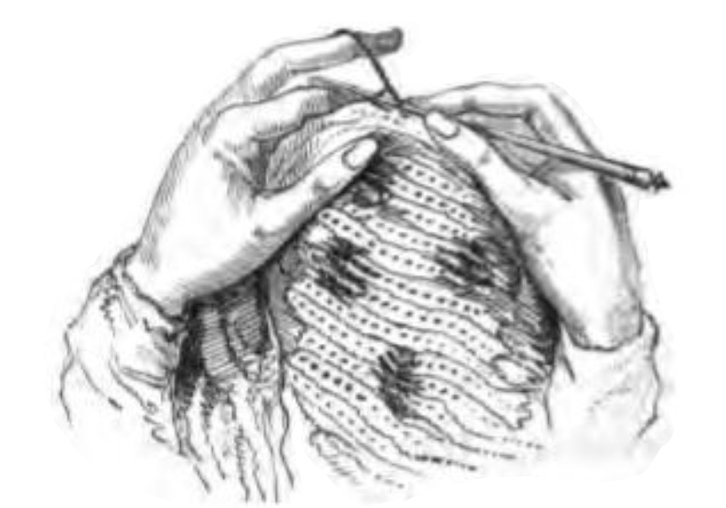 There is no evidence of a change in the way the yarn and crochet hook were held between 1833 and 1844, beyond what is implicit in the latter illustration. Precedent for the Dutch method is found in a German description of slip stitch crochet from 1800 (to be discussed in a separate post) using a flat hook.

That implement is also fundamental to the Swedish school of traditional crochet which never went fully out of practice between its origins — again documentable from the mid–18th-century — and its more recent return to the specialized craft repertoire. The following video shows Kerstin Jönsson using a flat hook in the manner described in 1800, and she discusses the Swedish craft further in her book from 2006, Smygmask virkning – teknik och mönster (“Slip stitch crochet – technique and patterns”).

My scouring of early publications never revealed any indication of the yarn-around-neck method of knitting described in the preceding several posts having a counterpart in crochet. However, the comments by Marie Jones on the most recent one made it clear that I had overlooked something of interest.

An entry in Carol Ventura’s Tapestry Crochet blog describes a visit to Portugal and includes photographs of three crocheters. Two of them are working in the manner illustrated in the 1844 text. The third, however, has the yarn around her neck and is holding the hook with her thumb extended in the manner typical for Portuguese knitters using hook-tipped needles. 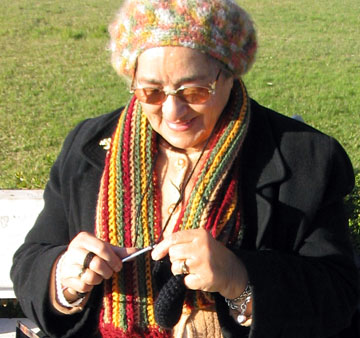 The same round of image-searching located a number of photos of other Portuguese crocheters consistently working in a somewhat different manner, using a shoulder hook, feeding the yarn through the hand that holds the fabric, and apparently focusing on lace. This is most clearly illustrated in this detail.

The way the yarn passes under all the fingers except the middle one, which it is wrapped around, precludes the mainstream technique of meting out and pre-tensioning the yarn for each new stitch by raising either the index or middle finger — yet again as shown in the Lambert illustration from 1844. The equivalent effect is provided instead by the tension placed on the yarn passing around the neck or a shoulder hook.

Similarly, altering the direction from which the yarn is fed changes the action of wrapping it over or under the hook. This now only requires the hook to be held against the yarn from the appropriate side, with the loop then completed by the same compact action of the thumb that characterizes Portuguese knitting.

None of this permits conclusions about when yarn-around-neck crochet came into practice in Portugal. The age of the method says nothing about that of the craft and the photos of contemporary practitioners needn’t signify anything more than a preexisting method of holding yarn for knitting having been adapted to crochet — especially if hook-tipped knitting needles were still in prevalent use whenever that might have happened. Nonetheless, there is obvious reason to keep an eye out for additional evidence indicating earlier forms of yarn-around-neck crochet in regions where that method of knitting is well established.

3 thoughts on “Methods of holding yarn for crochet”