The shepherds in Landes, the northernmost part of the French Basque Country, were a subject of popular attention during the 19th century for two traits. One was their use of stilts to deal with the marshy heathlands on which their flocks grazed, and the other was their practice of knitting while watching over them. A chapter on ‘The Shepherds of Les Bas Landes’ in the US publication Forrester’s Pictorial Miscellany from 1855 illustrates how widespread the interest in them had become. An article in the Scientific American Supplement from 26 September 1891 on ‘Stilt Walking’ describes the shepherds’ ambulatory prowess and social circumstance.

Illustrations of them knitting began to proliferate mid-century but rarely focus on its detail. The clearest one I have thus far been able to find is from 1863 (source information here) and shows yarn-around-neck (probably using a shoulder hook), with what may be a small pouch holding the yarn just below the sock that is in progress. 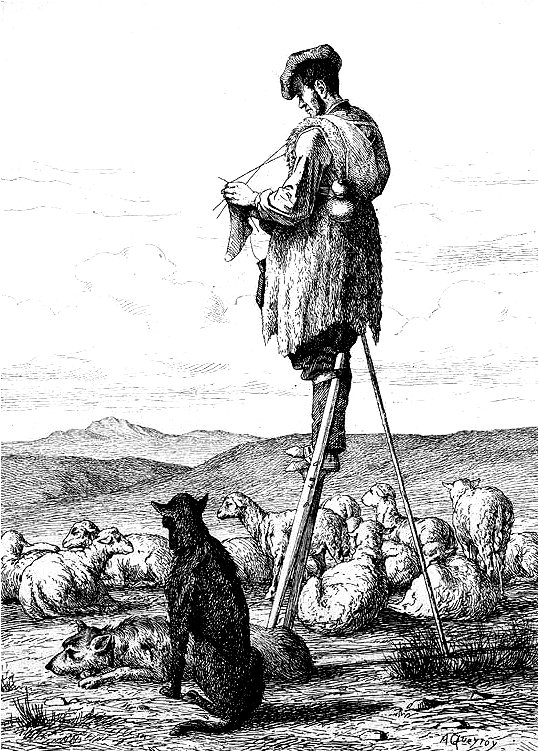 The shepherds’ knitting technique is described in Mary Thomas’s Knitting Book from 1938, showing the tools at the outset of the chapter on ‘Knitting Implements Ancient and Modern.’ (The preceding post discusses other aspects of her description of knitting in Landes.) 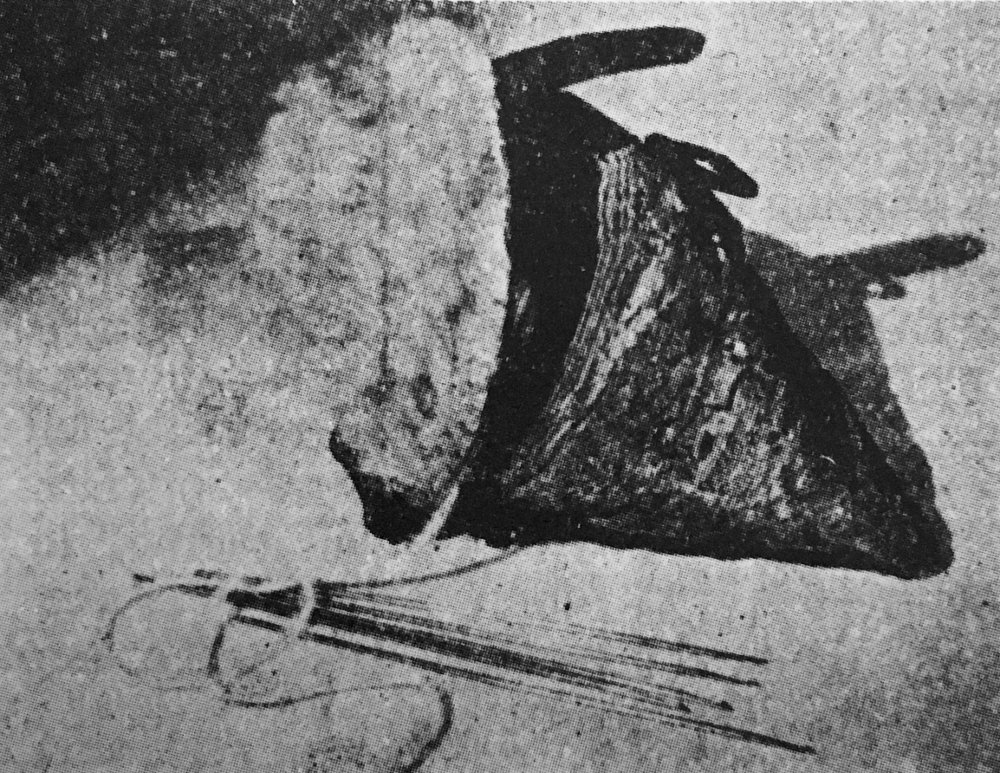 This photo shows an “ancient weatherbeaten knitting pouch” together with “modern…hooked needles…made by a shepherd…from old umbrella ribs…hand filed and shaped as they have always been made” in Landes. It is not clear what ‘ancient’ and ‘always’ actually mean.

Thomas says that hooked needles can be traced back to the Arabic origins of knitting, which applies in equal measure to the needles used in all the other schools of yarn-around-neck knitting discussed in previous posts. There is no evidence of a similarly characteristic shared use of a knitting pouch. It is of obvious utility for work while perched on stilts and, at least the form shown here, may have developed specifically in that context. The pouch is also seen clearly in a photo from the early-20th century, by which time the wetlands had been drained and the need for stilts had ended. 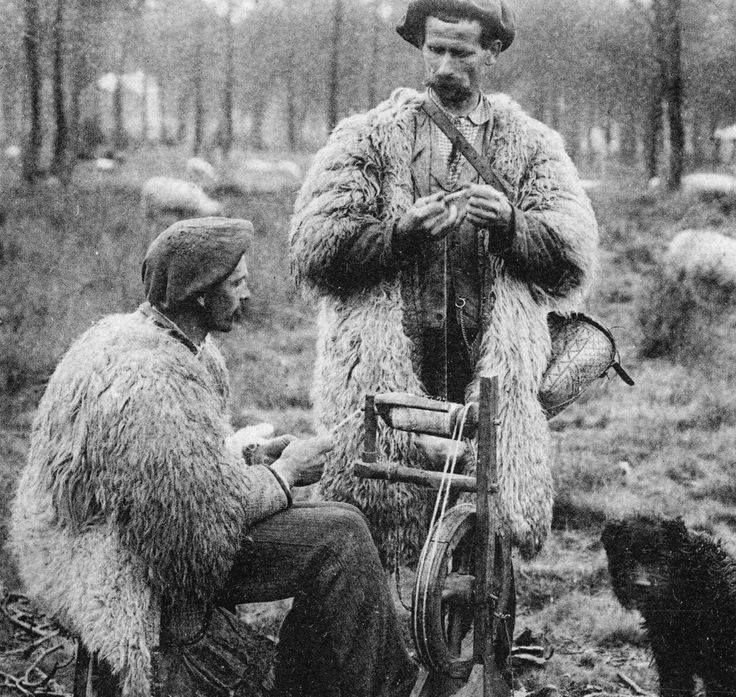 The knitting shepherds are also noted in the Victorian fancywork literature. The introductory remarks about crochet in The industrial handbook containing plain instructions in needlework and knitting, published anonymously in 1853 state:

“This kind of work, which has lately become fashionable under its new name, was formerly called ‘Shepherd’s Knitting.’ It has long been a favourite occupation of this class of persons, particularly in the south of France, where, whilst tending their sheep on the mountains, they fabricate a number of useful and ingenious articles.”

This conflates the knitting of the Landes shepherds, who were approaching the heyday of their international renown, with the traditional slip stitch crochet called “shepherd’s knitting” and described in earlier British texts on crochet as the initial manifestation of that craft.

“Crochet,—a species of knitting originally practised by the peasants in Scotland, with a small hooked needle called a shepherd’s hook…”

That snippet was discussed in greater detail in an earlier post, leading to yet another form of knitting with a hook-tipped needle associated with Scotland, termed Scottish knitting or Tricot éccosais. This was most commonly referred to in the Victorian literature as “tricot” (now generally termed Tunisian crochet) and worked with a “tricot hook.” This gainsays Mary Thomas’s concluding remark about the practice in Landes, that “There appears no trace of hooked needles in Britain…”

Subscribe to this discussion
5 Comments
Inline Feedback
View all comments

Thank you so much for these posts. I am finding them incredibly interesting especially with regard to crochet (my main interest). Would love it if you could find details of yarn around neck crochet techniques. Or have you covered that in a previous posts? Best, Mx

And thank you for letting me know that they’re appreciated! In fact, crochet is also my own main interest and I have quite a bit of material about it in the queue. I haven’t seen anything that directly suggests a yarn-around-neck practice. However, the earliest article made in slip stitch crochet I’ve yet run across appears to have been worked with the wrong side to the front and then turned inside out — something that could suggest yarn-around-neck if the piece had been knitted. I’m uncertain that any cross-craft relationship can be inferred from this. [Edited to delete speculative assumptions about differences between the two crafts.]

I have posted a separate entry extending the remarks I initially made in response ot this comment.