The description of Bosnian crochet given by Luise Schinnerer in 1897 and discussed in detail in the preceding post, is echoed in almost all points of detail in the article on crochet in the Encyclopedia of Needlework; New Edition by Thérèse de Dillmont. This work has appeared in numerous editions beginning in 1886 but the first one makes no mention of Bosnian crochet, nor do the first French or German editions. The revised French edition appeared in 1900 (briefly reviewed in the newspaper Le Radical on 31 July 1900) and the various translated versions would not have been released earlier. This left ample time for Dillmont (a native German speaker) to have taken note of Schinnerer’s article in the interim. (The online copy linked to above is of a printing from January 1922, as indicated by the numerical code ‘122’ at the bottom of the page following the title page.)

Linda Ligon reviewed the Dillmont article in the July/August 1994 issue of PieceWork Magazine also noting that there was no mention of Bosnian crochet in the first edition of the Encyclopedia, “so it’s not clear when this special kind of work came to her attention.” I believe the answer to that question is when she found Schinnerer’s description of it.

Beyond illustrating the craft, Dillmont’s text is particularly important because it enters the English term “Bosnian crochet” into the fancywork glossary, defining it according to Schinnerer’s description. However, Dillmont does not retain Schinnerer’s exclusive focus on traditional tools and applications. The shared basic stitch is described in the Encyclopedia as the “single stitch” noting that it “is also known as the slip stitch.”

The work is not turned at the end of a row and the yarn is simply carried a bit beyond the final stitch and cut. When the next row is started, “the thread has to be fastened on afresh, each time.”

Dillmont provides detailed instructions for making a strip of the mixed-color form, working into the back leg of the chain loop of the corresponding stitch in the preceding row (now abbreviated BLO). Schinnerer only says that the same leg of that loop is used without specifying the front (FLO) or the back.

Another instruction is for the characteristic relief pattern that results from selectively alternating the point where the hook is inserted, from the back leg to the front leg of the loop. Both Schinnerer and Dillmont say this is only done using a single color.

Schinnerer also shows a photo of a hat where the upper closed-work portion is made in this manner (but does not describe the stitch structure of the wide band at the bottom). 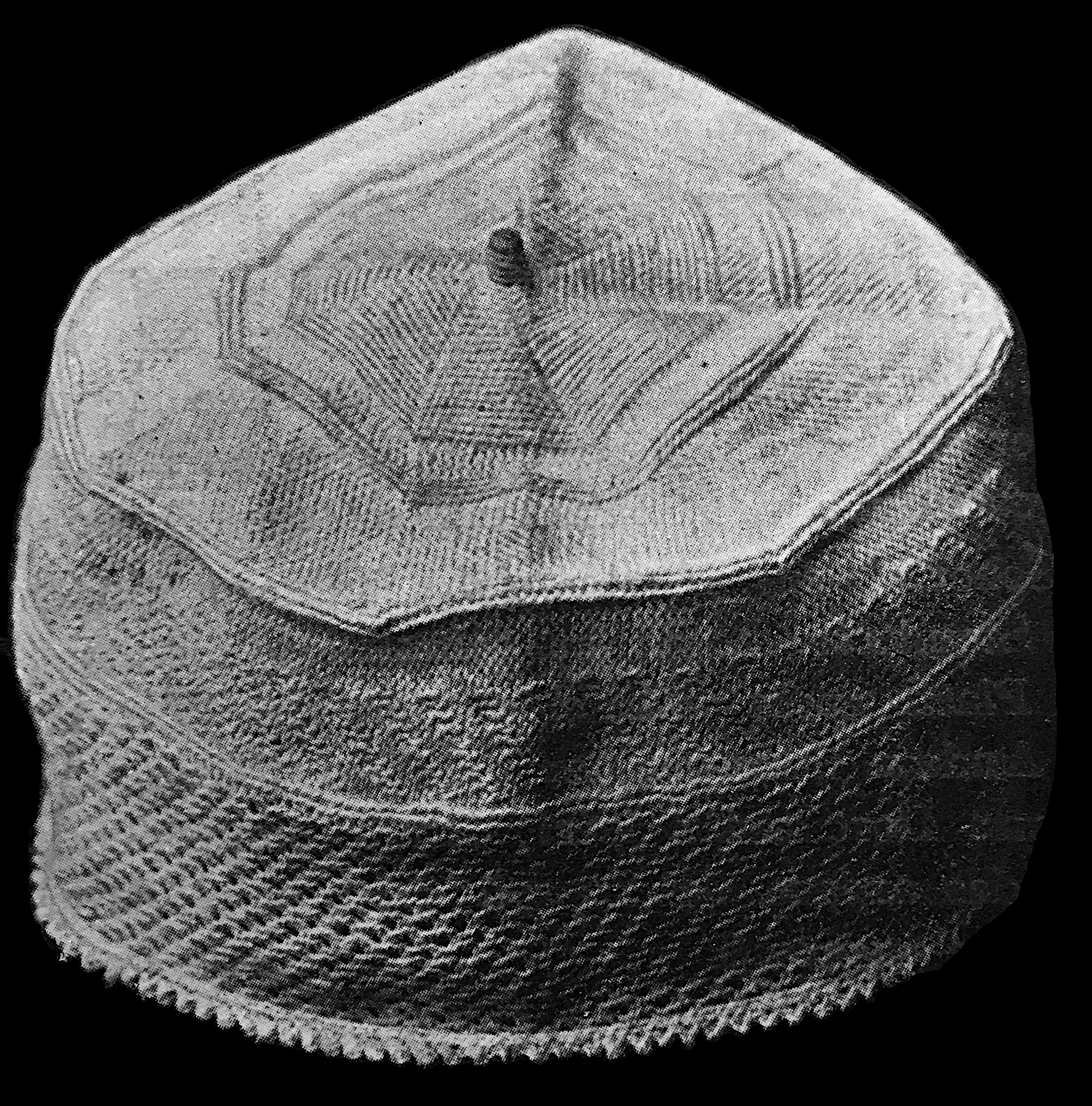 Her article additionally discusses Bosnian-Herzegovinian knitting with hook-tipped needles, and the regional practice of making fabric with alternating bands of slip stitch crochet and knitting. Although something of a centerpiece for Schinnerer, Dillmont says nothing about it.

One interesting characteristic of the hybrid fabric is that the crocheted portions are made using a special hook and not the hook-tipped knitting needles, despite Dillmont indicating that the latter option would be viable. Her illustration of an ordinary crochet hook being used to produce slip stitches could as easily show the end of a hook-tipped knitting needle. In fact, this ties into an earlier post that I left dangling with the intention of following up much sooner, where a cylindrical crochet hook (found in trade listings up to 35 cm long) is illustrated in use for what may well have been slip stitch crochet.

Nonetheless, traditional slip stitch crochet is often associated with the use of a special hook, not just in the Bosnian school, but in others as well. Various local manifestations have been discussed in several previous posts. The current Swedish tradition uses this form, which can be traced back into the late 18th century.

It is also described in an early Dutch publication (details here ) and presumably used elsewhere. However, given the clear difference between it and the Bosnian hook shown by Schinnerer, there is no substantive basis for the frequent reference to the Nordic/Dutch form as a Bosnian crochet hook.