The text by Fritz Iklé discussed in the preceding post summarizes an article “about Bosnian-Herzegovinian knitting” by Luise Schinnerer published in the 1897 volume of the Zeitschrift für österreichische Volkskunst (Journal of Austrian Folk Art). He doesn’t indicate its title and focuses on her observations about knitting with hook-tipped needles being a practice of the Islamic community in Bosnia and Herzegovina (and adjacent regions). He ties this into the established belief that knitting originated in Egypt, noting that it was not the “ancient Egyptians” but later “Arabic tribes” who devised it.

Luise Schinnerer (b. 1854, still active in 1915, also publishing as Louise) was a teacher at the Royal School for Artistic Embroidery (k. k. Fachschule für Kunststickerei) in Vienna and is now best known for her technical analysis of nalbinding. This was the first detailed text on the subject and appeared in a booklet she published in 1895 titled Antike Handarbeiten (Antique Handicrafts). It includes photographs of a nalbound Coptic sock and a reproduction she made of it (exhibited publicly in 1893 and 1894, receiving awards on both occasions) together with drawings of how the stitch structure was produced.

The text recognizes the structural difference between nalbound cross-knit looping (illustrated with a fragment of another sock) and laterally interconnected compound nalbinding (as in the sock she reproduced). However, Schinnerer regards the cross-knit fabric as twisted-stitch knitting — a technique she says was known in Egypt by some time during the interval 6th–4th century BCE. She further says that it was practiced in parallel with nalbinding subsequent to the emergence of the latter in the Coptic period or perhaps somewhat earlier, and distinguishes between the two ways of making socks as Strumpfstrickerei and Strumpfnäheri (“stocking knitting” and “stocking sewing”).

Schinnerer apparently based her belief about the antiquity of knitting on a cited feature article in the Neue Freie Presse (New Free Press) from 1882 titled Altegyptische Textilkunst (Ancient Egyptian Textile Art), written by the founder of the Royal School for Artistic Embroidery, Emilie Bach (b. 1840) and discussed further with a translation here. Schinnerer adds her own observations in the article referred to by Iklé, the full title of which is Einiges über die bosnisch-herzegowenischen Strick- und Häkelarbeiten (Something about the Bosnian-Herzegovinian Knitted and Crocheted Works). This covers recent practice and her informants include the National Government of Bosnia and Herzegovina, the National Museum, and the Bosnian-Herzegovinian Bureau for Domestic and Applied Arts in Vienna.

The article provides fundamental descriptions not just of knitting with hooked needles, but of an indigenous form of slip stitch crochet as well. It also illustrates fabric that includes knitting and crochet side by side. A photograph of a partially finished sock can be directly compared with the one from Turkey shown in Iklé’s article. 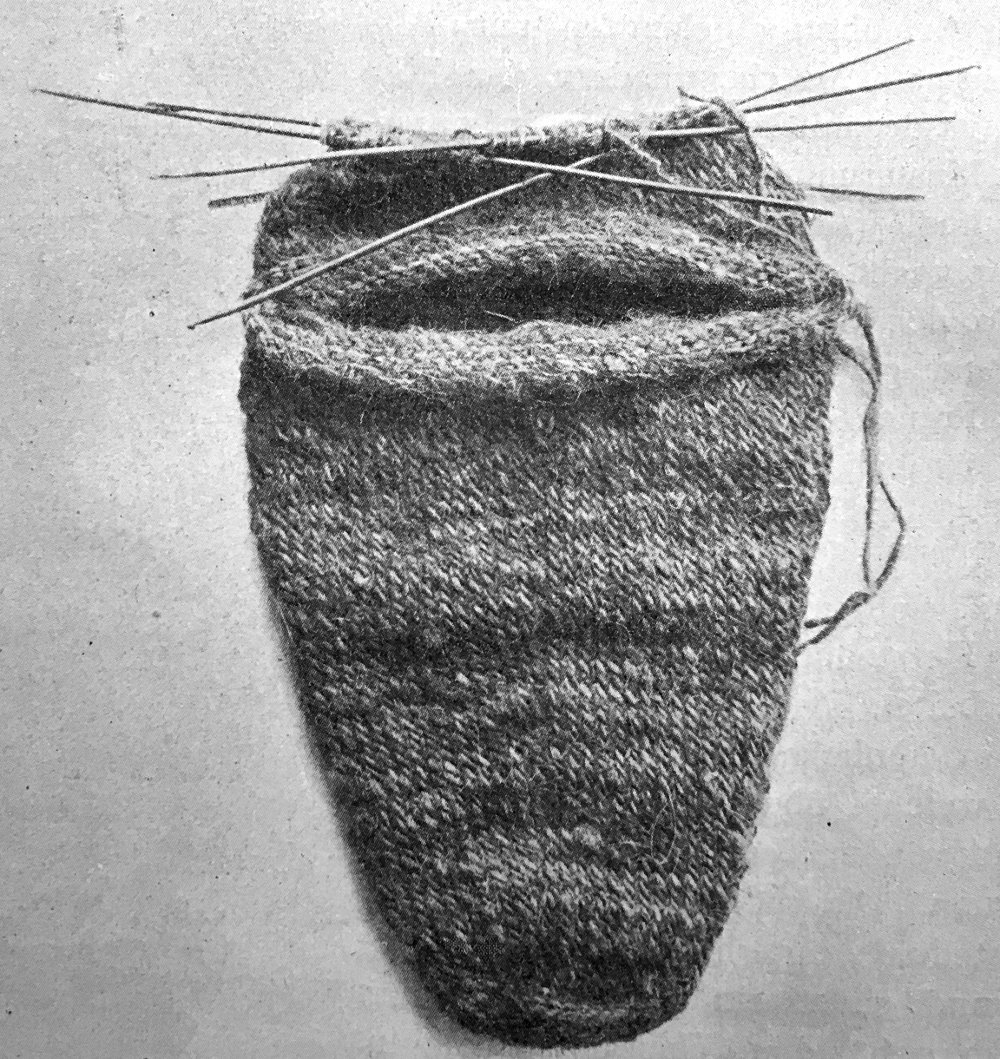 In contrast to the open-stitch knitting he illustrates, Schinnerer’s photograph is intended to show a twisted-stitch structure, again demonstrating that there is no geographic basis for categorizing the two forms of knit stitch as Western and Eastern.

Schinnerer illustrates the tool used for crochet, which fits into a sequence of drawings of specialized hooks for slip stitch crochet that began to appear over a century earlier, when the craft was first documented — attested in English texts beginning in 1812 as “shepherd’s knitting.”

The earlier illustrations clearly show hooks with flat cross sections and tapered shafts. Even if not apparent from this drawing, it can safely be assumed that the Bosnian hook was similarly shaped, not least in light of Schinnerer remarking that “mass-produced commercially-available crochet hooks are unsuited” for such work.

Schinnerer further characterizes Bosnian crochet by two decorative techniques. One is a raised pattern made by selectively working slip stitches into the front and back legs of the chain loops of the corresponding stitches in the preceding row. (These are detailed in the following post.) This contradicts the more recent assertion that Bosnian crochet differs from other forms of slip stitch crochet in that new stitches are consistently worked into the back legs of the loops of the stitches to which they are anchored.

Such decoration is only applied to work that is crocheted throughout. It does not appear in fabric consisting of alternating bands of knitting and crochet, which Schinnerer illustrates with another sock and a mitten. The second decorative technique forms a pattern by the alternating use of yarn with different colors, worked consistently into the same leg of the anchor loop. She neither says which leg that is nor that there was a general preference.

Schinnerer notes that the abutting knitted and crocheted structures are made respectively with hooked knitting needles and the specialized crochet hook, again indicating a significant difference between the shapes of the two implements where the stitches are formed. The possibility of these tools having arrived on the Bosnian workbench via separate paths therefore deserves further examination.