Emilie Bach (1840–1890) was a founding director of the Royal School for Artistic Embroidery (k. k. Fachschule für Kunststickerei) in Vienna and a named contributor to several of the publications regularly cited on this blog. She was also one of the initial participants in the discussion of the techniques used for the early production of looped socks in Egypt and the first to identify a cross-knit fabric structure in such objects from the Later Roman Period. However, she took it to be knitted rather than nalbound, and was completely wrong about the age of the exemplars she examined.

The next study in the sequence that ultimately sorted out the relationship between the two techniques — a booklet published in 1895 by Bach’s co-worker Luise Schinnerer (1854–after 1915; discussed here) — recognizes compound nalbinding in archeologically recovered Egyptian socks. However, Schinnerer accepts that those with a cross-knit structure were knitted, with reference to a feature piece by Bach in the Viennese daily newspaper Neue Freie Presse (New Free Press) from 22 August 1882, titled Altegyptische Textilkunst  (Ancient Egyptian Textile Art).

This article begins by questioning the applicability of research methodologies developed by male academics to tracing the history and development of crafts practiced by women. Bach exemplifies this with the belief that lace was not developed until the 15th century; a conclusion drawn by earlier researchers on the basis of there being no direct or indirect evidence of it before that date. She does not substantiate her reasons for feeling this to be specious but adds such detail in the discussion of a second case.

“The situation is similar with knitting. Recent academic publications present the art of knitting as an invention of the 16th century, naming the Spanish as the inventors. In his comprehensive Geschichte der liturgischen Gewänder [History of Liturgical Garments], the learned canon Dr. Bock states that the art of knitting was devised in the 17th century.

While this type of research was going astray by following misleading clues, millennia-old Pharaonic graves were being opened in the land of the pyramids. In addition to artfully embalmed mummies, well-preserved vestments were found there that had been given reverentially to the dead. Some are now housed in the Louvre in Paris and provide research with invaluable and irrefutable evidence of so many types of needlework in such ancient times.

The study of this significant collection of ancient Egyptian garments led to a rich yield of positive knowledge. It is otherwise kept in tightly sealed display cases labeled Etoffes trouvées dans les tombeaux [Fabric found in the tombs], but was made available to me for close examination thanks to the extraordinarily helpful accommodation of the Directorate of the Louvre and the curator Mr. Revillon.

I have already spoken elsewhere about a pair of knitted stockings found in the grave of a mummy. These provide surprising proof, first, of sock-like short stockings about which nothing is said in costume history, being worn by the ancient Egyptians. Second, of their having brought the art of knitting to high perfection — based on the estimated respectable age of the grave finds — three thousand years ago.

These peculiar stockings are knitted in a manner that is absolutely equivalent to one of our own techniques. The material is thin sheep’s wool yarn that would once have been white but is now brown and pale with age. The needles on which they were worked must have been somewhat thicker than those we would select for the same purpose, thereby giving the knitted fabric a very elastic, loose, and open appearance.

The stocking starts at the upper edge with a single thread, just as we to this day use the simplest of the many common methods for ‘casting on.’ However, the rest of the work is not simply ‘flat,’ but knitted more intricately, as we now call ‘English.‘ The usual cuff that keeps the knitted work from curling is narrow, consisting of a single row of ‘turned’ stitches. With the nice gusset and cleverly constructed heel, which differs somewhat from our method of knitting, a highly practiced hand is indicated. However, the toe of the stocking shows a characteristic difference when the Egyptian socks are compared with our modern ones. While ours end in a flattened tip, the old Egyptian stockings are worked into two equally long and wide tubes, resembling the fingers of gloves. This alien form corresponds fully to the design of the sandals of which the same collections include several finely trimmed examples. Each is equipped with a strap fixed rather deeply toward the middle of the sandal. Since the strap has to fit over the stocking, a distinctive division of the toe into two parts is required. The heels and soles of this remarkable pair of socks were worn flat, proving that they once had been in use.

When the curator handed them to me for further examination, one of them disintegrated with frightening rapidity into dust and decay. The other remained fully intact and is kept safely at the Louvre to this day. I asked for a small piece of the spoiled remnants of the first one, from which three stitches still held tolerably together. As I am writing this, these relics are in a glass-covered frame. They are looking sternly and provocatively out at me with their thousands-of-years-old stitch eyes [Maschenaugen], as if they wanted to ask how much of the culture and art that we are so proud of today, is in fact the accomplishment of bygone populations.

Much of what appears to us today as new had, as these collections in the Louvre clearly demonstrate, actually long been known to the ancient Egyptians.”

Bach never states how the socks came to be associated with an Ancient Egyptian tomb but that belief was presumably shared by the Louvre. It is not certain that the cross-knit sock currently in their collections with the catalog number E 32318 is the one that survived the examination nor how long before the publication date she made the chronicled visit (which may be the first published account of an interaction between a guest craft specialist and the curatorial staff of a museum). Certain details in her description match E 32318 better than others, but weighed with the circumstantial evidence, it is reasonable to accept that it indeed is the one described in 1882. 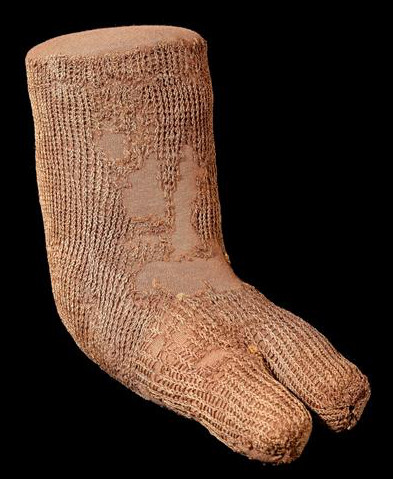 It has recently been radiocarbon dated to the interval 325–419 CE (with 89.3% certainty) and belongs to the corpus of Romano-Coptic nalbinding. Full details, with those of comparable material with similar provenance, appear in an article titled “Radiocarbon Dating of Late Roman Woollen Socks from Egypt,” by Antoine de Moor, Cecilia Fluck, Mark van Strydonck, and Mathieu Boudin, in Textiles, Tools and Techniques of the 1st Millennium AD from Egypt and Neighboring Countries, 2015.

Although Bach failed to recognize the difference between cross-knit looping and twisted-stitch knitting, there is a noteworthy detail in the way she describes the latter technique. There is no question about “the manner that is absolutely equivalent to one of our own techniques” being twisted-stitch knitting. She regards the twisted stitch as a variant of the plain (aka open) knitted stitch, just as it is commonly presented in recent craft literature. Referring to it as what the Austrian knitters of her day “now call English” contraindicates the preferential association of twisted stitches with Eastern European knitting later postulated by Mary Thomas (discussed here).

The work of Franz Bock (1823–1899) that Bach cites, Geschichte der liturgischen Gewänder des Mittelalters (History of Liturgical Garments in the Middle Ages, three vols. 1859–71), is also worth a digression. He makes no claim of knitting having been invented in the 17th century and only mentions that technique in a discussion of the significance of the advent of the stocking frame in the 16th century.

“As previously noted, throughout the entire Middle Ages, gloves for bishops and retired abbots were mostly cut from heavy silk fabric and sewn together. Through the invention in the 16th century of the art of knitting stockings with a simple device, the situation soon arose where gloves for both secular and ecclesiastical use could be knitted mechanically in a single piece [künstlich zu wirken]… It was customary in the 16th and 17th centuries for knitted [gestrickten] ecclesiastical gloves or those worked [gewirkten] on a small frame [Handstuhl] to be…”

Bock uses the verb ‘wirken’ most often in the cognatic English sense of ‘to work’ but it also designates warp-based modes of non-woven textile production (such as warp knitting and tapestry). It is not clear if he noted a structural difference between ‘knitted’ and ‘worked’ gloves or used the labels synonymously. What have since been determined to be both knitted and nalbound gloves appear on two of his plates, here and here.

Emilie Bach was also a bylined contributor to the German publication Der Bazar (an uncommon distinction) that has figured prominently in several recent posts. Her contributions begin with a piece titled Vom Handwerk zur Kunst (From Handicraft to Art) in the issue dated 22 November 1875. Had she drawn her conclusion about the origins of knitting before writing that article, it is likely that she would have mentioned it there. The wording of the 1882 article similarly indicates that her visit to the Louvre was not recent. It therefore appears safe to conclude that it took place in the latter half of the 1870s.