The German periodical Der Blatt had a leading role in the publication of variant forms of the “ordinary Tunisian crochet stitch.” The first two appearing there are described in the post before last and depart markedly from what is now known as the Tunisian simple stitch (TSS). A variant presented in the 1 January 1862 issue differs from it so extremely that it would likely not be seen as derived from the TSS if the instructions didn’t say so.

The designers at Der Blatt would have had a reasonable expectation of their readers being able to obtain the prescribed tools. However, if hook-tipped knitting needles were commonly available to the target audience or in trade under another designation, the instructions would presumably have named them directly. Later instructions also specify a form with hooks at both ends, indicating that the need for altering stock Tunisian hooks or knitting needles was not an impediment.

The 1862 instructions use the hook/point and hook/ball needles together to make a “shell stitch” (Panzerstich) that was published with three other “new crochet stitches,” all modifying the TSS by varying the structure of the return chain. They significantly alter the standard form of that chain in different ways but the shell stitch is alone in the extent of its proximity to knitting. As was frequently the case with newly devised variations of the Tunisian stitch, it is only illustrated with a swatch. 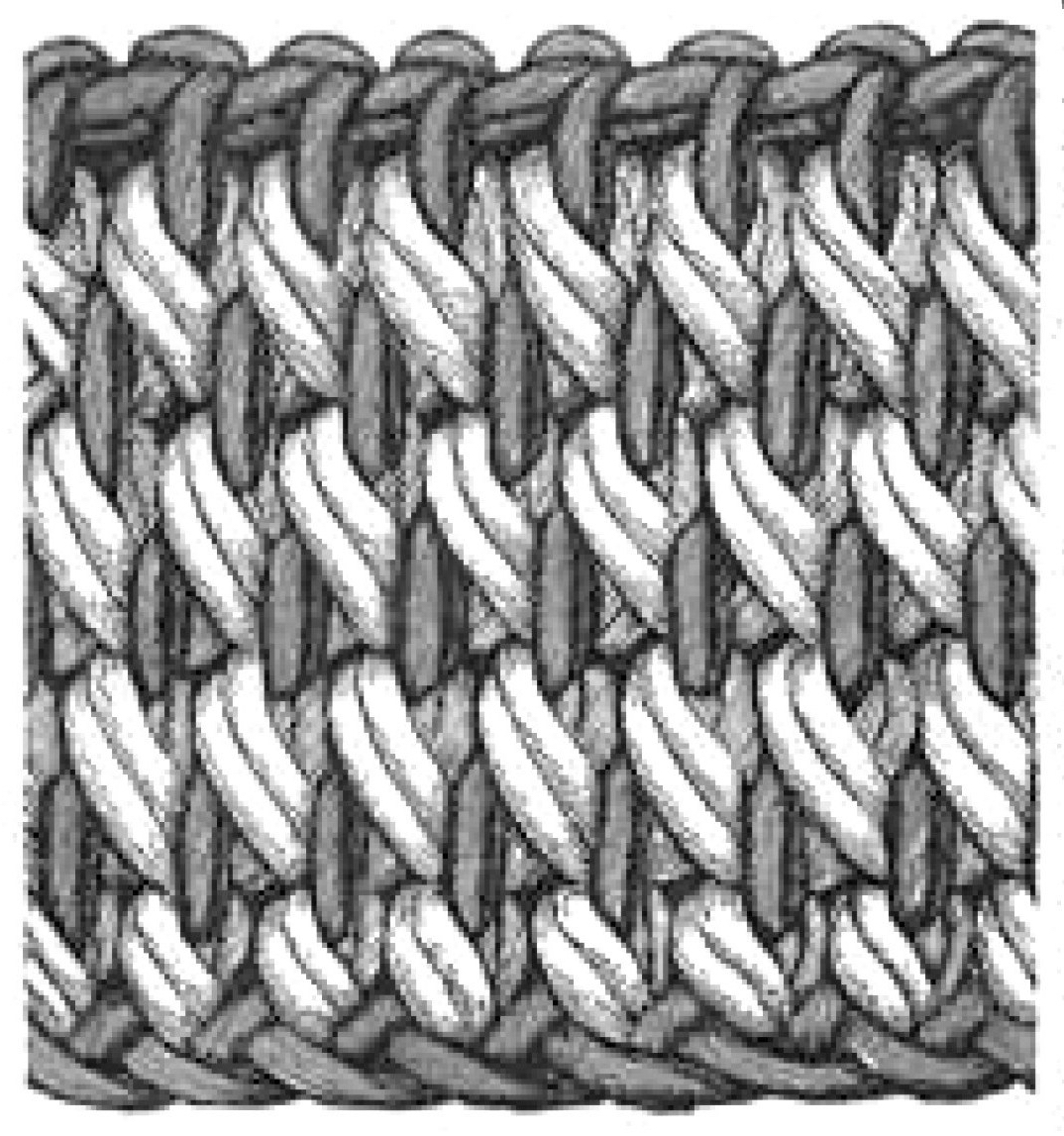 Because of its unfamiliarity, a second illustration shows the fabric stretched open and the juxtaposition of the two hooks. 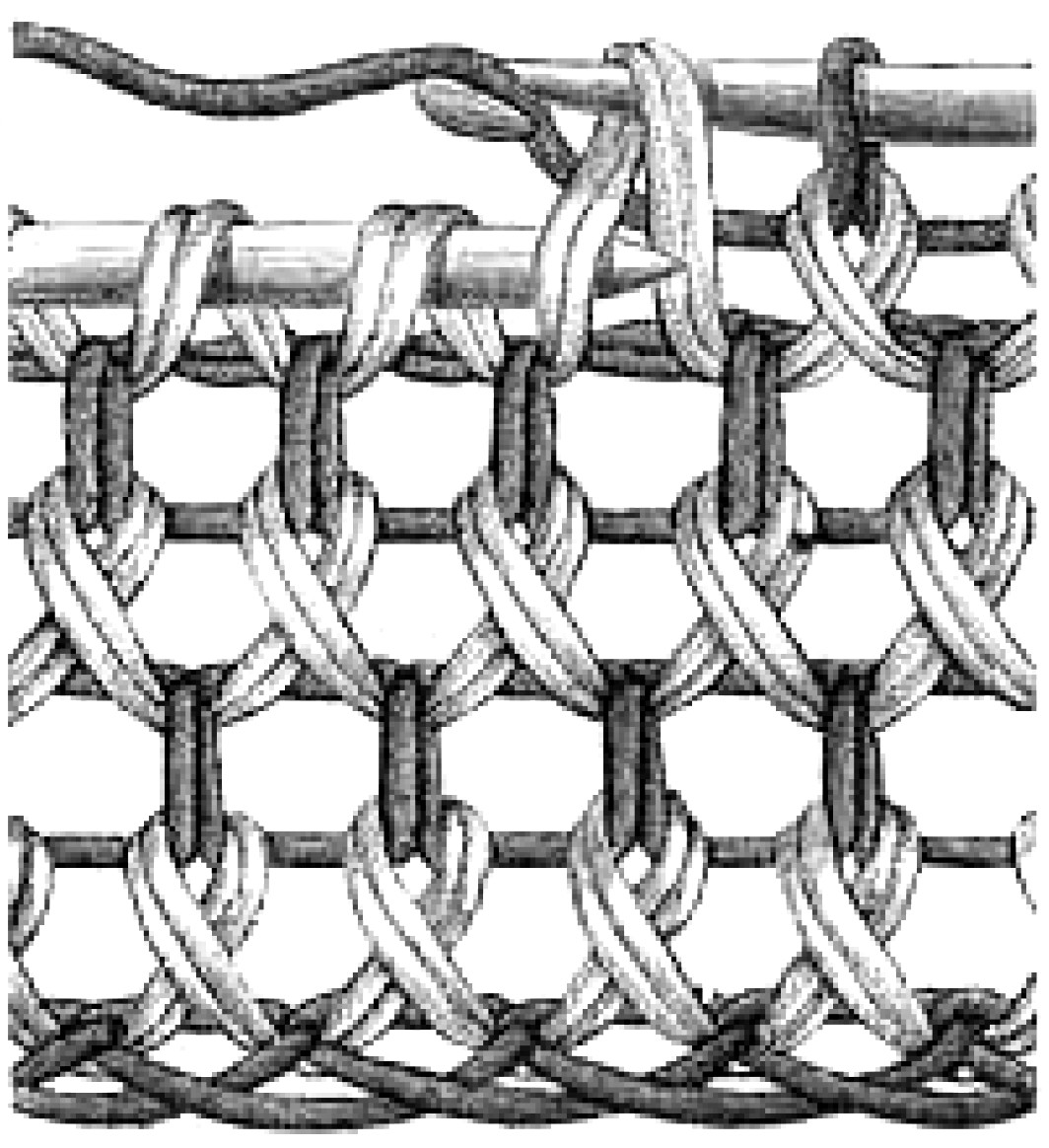 Here are the instructions:

“This stitch differs from the other Tunisian crochet stitches in two significant ways. Namely, it consists of pattern rows that alternate between one and two passes, and is made with two different wooden hooked needles. The one of these two crochet needles, which should be on the heavier side, cannot have a knob at its lower end, which has to be pointed like a knitting needle. The other needle is a wooden crochet needle with a knob at its lower end to prevent the stitches from gliding off, but has to be smaller than the needle without the knob by almost half. In order to highlight the distinction between the individual pattern rows, they are worked in two contrasting colors [here blue and white]. The pattern row that is worked in one pass only is always crocheted from right to left with a double strand of yarn and the hook without a knob. The following pattern row, which includes two passes, is made with the thinner hook and a single strand of yarn. The forward pass in this pattern row is also worked from right to left, as with knitting, using both needles…

1st pattern row. After making a foundation chain with the blue yarn and without cutting it, use the hook without the knob to pull a loop of the doubled white yarn through each stitch in the foundation chain. These loops remain on the hook to form new stitches. At the end of this pass, cut the double yarn and work the,

2nd pattern row with the blue yarn that was left hanging at the starting edge of the fabric, using the thinner hook. In the first pass a loop is pulled through each of the double stitches in the white yarn in the preceding pattern row, by inserting the hook into the back of the stitch as is clearly shown in the illustration, and removing the stitch from the hook so that the double strands on either side of that stitch cross over each other as shown in the completed rows of those stitches. The second pass is crocheted from left to right just as with the second pass in a pattern row of the ordinary Tunisian crochet stitch, and the blue yarn is left hanging until the next pattern row that uses it.

3rd pattern row. Again place the double white strand on the hook without the knob and crochet from right to left, by pulling a new loop through the opening between the vertical parts of each stitch in the preceding row. These loops remain on the hook to form new stitches.

The tip of the heavier hook is not illustrated but the direction in which the loops of double white yarn cross over it follows from the customary crocheter’s practice of beginning a stitch by wrapping the yarn over the hook from back to front (YO). In contrast, the thinner hook is shown ‘grabbing’ the blue yarn from above without a YO. This is equivalent to wrapping the yarn under the hook (YU), and seats the loops on it in the opposite direction.

However, as drawn, the paths taken by both the blue and white yarn around their respective hooks are the same, also consistent with the orientation of the blue stitches in the fabric. Since the white loops are twisted as they are worked into stitches, their orientation in the fabric is the opposite of that on the hook.

The instructions emphasize that the use of the hook to twist the white stitches “is clearly shown in the illustration.” However, if the YU is correctly represented, the leg of the blue loop moving toward the tip of the hook should be on the back of the hook rather than on the front. The express statement of accuracy makes it difficult to dismiss the inconsistency in the path of the blue yarn as the result of an initial YU being drawn where a YO is intended. That would be the most straightforward explanation, nonetheless, and is also supported by the orientation of the blue stitches in the fabric. However, the illustrated fabric structure can also be produced in a manner that applies both the YO and the YU techniques.

The instructions twist the loops in the white yarn by inserting the righthand hook into each of them from behind. However, if the white loops are YU rather than YO, they will be twisted by inserting the righthand hook into them from the front. The inconsistency in the drawing can therefore be resolved by swapping the illustrated YU forward pass from the blue to the white yarn, and the YO forward pass from the white yarn to the blue. A proof-of-concept swatch made in that manner can be compared with the initial woodcut. 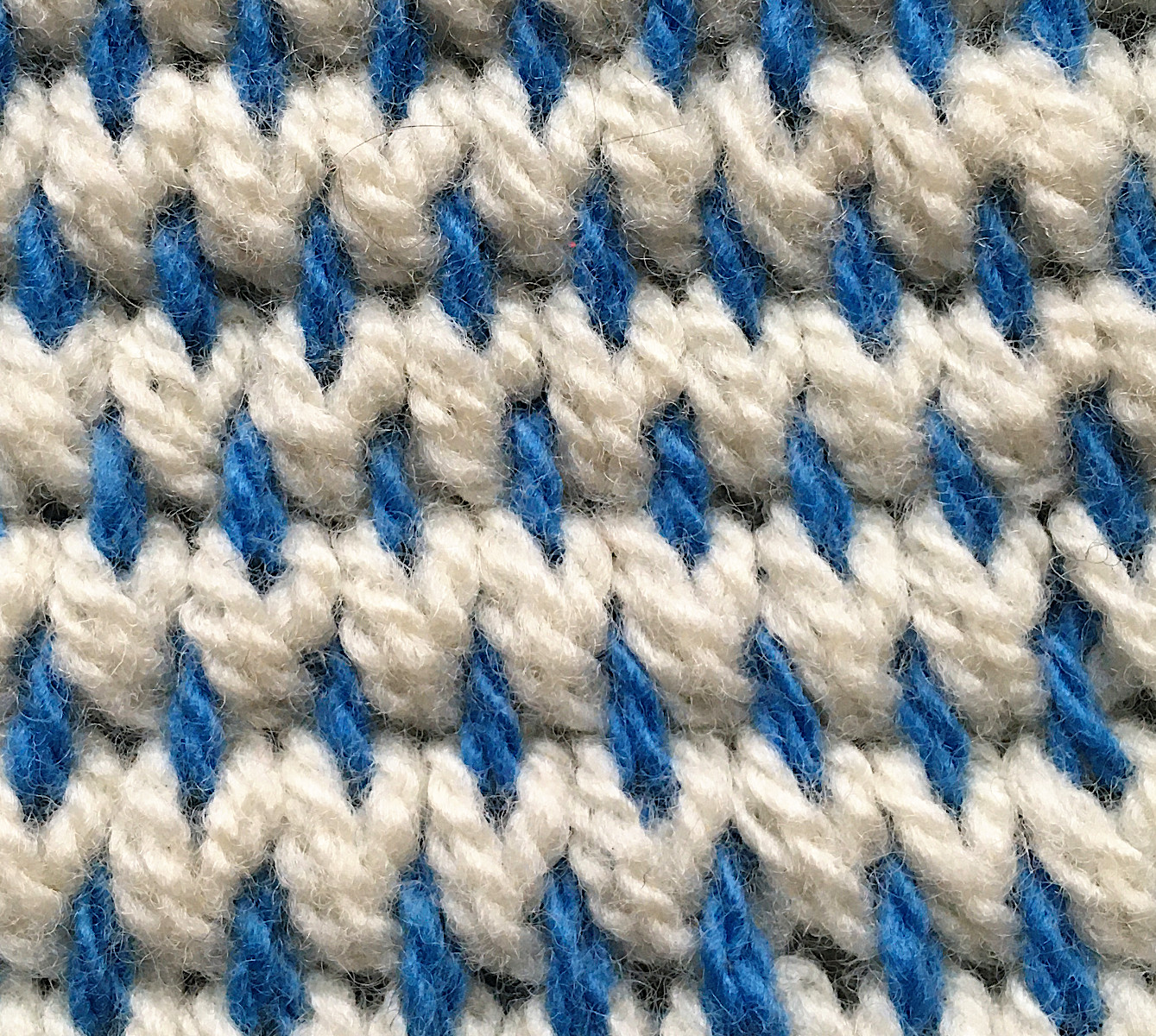 Another detail of the described procedure requires comment. Cutting the yarn at the end of each row worked flat, and starting the next row with a new length of yarn, was a common attribute of flatwork crochet throughout the 19th century (readily seen in an array of stitches in the 15 June 1867 issue of Der Bazar). However, one feature of the Tunisian crochet stitch is that it permits flatwork without need either for cutting the yarn or turning the fabric. The illustrated shell stitch discards that advantage and the doubled white yarn leaves twice the usual number of dangling yarn ends to be dealt with.

Given the numerous variant Tunisian stitches that were otherwise available, it would be reasonable for readers of Der Blatt to wonder what the one that required a special second hook and additional finishing was good for. In direct response to numerous queries received from readers who posed that very question, the illustrations and narrative explanation were reprinted in the 14 November issue of the same annual volume. Nothing was added about its visual effect but its heading was extended.

Despite this, Der Blatt never published instructions for any garments using it (that I’ve managed to spot). Their designers continued to explore special-tool variants of the TSS, producing instructions (to be discussed separately) that call for the now familiar double-ended Tunisian hook before the end the century.

Anyone following this discussion with tools in hand will soon note that the hook on the tip of the righthand needle makes it trivially easy to slip an unworked loop onto it from the lefthand needle and then knit it into a stitch, crochet style (ambiguity intended). It may therefore be simpler to separate the actions that overlap in the illustration, first moving the loop of white yarn onto the righthand needle, and then working the loop of blue yarn into it.

I don’t produce video material and am unaware of anything about this technique being on YouTube.

I have tried this and find it quite addictive. Thank you for your research. Fascinating