The preceding two posts discussed inconsistencies in some of Irene Emery’s remarks about the fabric structures she calls plain knitting (here) and plain crochet (here). Her narrative continues with the observations:

Crochet is really a doubly interlooped structure (made with a hooked implement)… It is basically a kind of chaining… In the simplest stitch — plain crochet — each loop is drawn through two previous loops, the corresponding one in the previous row and the previous one in the same row.

The first statement says the vertical chaining on one face of plain knitted fabric is not a structural attribute but only has the appearance of one. Nonetheless, the chains that create that appearance have a demonstrable structural coherence. This is seen when the loop at the top of a chain is dropped from its support and then runs through the stitches below it, forming a “ladder” of horizontal bars between the corresponding stitches in the adjacent intact chains. The vertical structure is commonly restored by using a crochet hook to loop each bar in the ladder around the bar above it in a process that can as reasonably be termed chaining as can the mechanical action fundamental to crochet.

The second statement presents two requirements for fabric to qualify as crochet. An individual crochet-type chain intrinsically fulfills one of them; each loop is drawn through the previous loop in the same row. However, a chain does not meet the additional condition of also being drawn through the corresponding loop in the preceding row. A row of chains is therefore not crochet in itself and only becomes so when it is worked into an adjacent row of chains.

The challenge addressed by the present series of posts is devising a descriptive framework that includes not only plain crochet and plain knitting, but also plain tricot (Tunisian simple stitch). This is procedurally more closely affiliated with ordinary crochet than it is with knitting but the same cannot be said about the fabric’s structure.

One of the definitive attributes of tricot is that a complete row of stitches requires two passes across the fabric. The forward pass resembles knitting in both procedural and structural regards. The return pass is similarly akin to crocheted chaining. However, its purpose is to return the tip of the hook to the starting edge of the fabric and does not necessarily add a crocheted structure to it.

This is clearly illustrated with plain tricot. The return chains can be removed from such fabric entirely, transforming it into plain knitting. If the vertical knitted structure is removed from plain tricot, the fabric simply disintegrates. However, there are tricot stitches where the forward row is worked directly into the preceding return chain. This interlooping qualifies them as crochet (again, by Emery’s definition) and there is an array of intermediate states.

Since both the horizontal and vertical structures in plain tricot can be described as chains, as can plain crochet and plain knitting, an obvious next step is to consider whether the chain can serve as the modulating factor in an overarching categorization scheme. The difference between its two forms is that a crochet-type chain is made by placing a single loop on a support and working a new loop through it in immediate succession. Although such a chain has no inherent directionality, when interlooped into fabric it is positioned horizontally. Knit-type chains are made by first placing a row of loops on a support and then successively working a new loop into each of the preceding ones. This forms a vertical structure with as many parallel chains as there are loops on the support.

The loops in the two types of chains can themselves be differentiated in terms native to industrial knitting. A distinction is made there between symmetrical and asymmetrical loops. 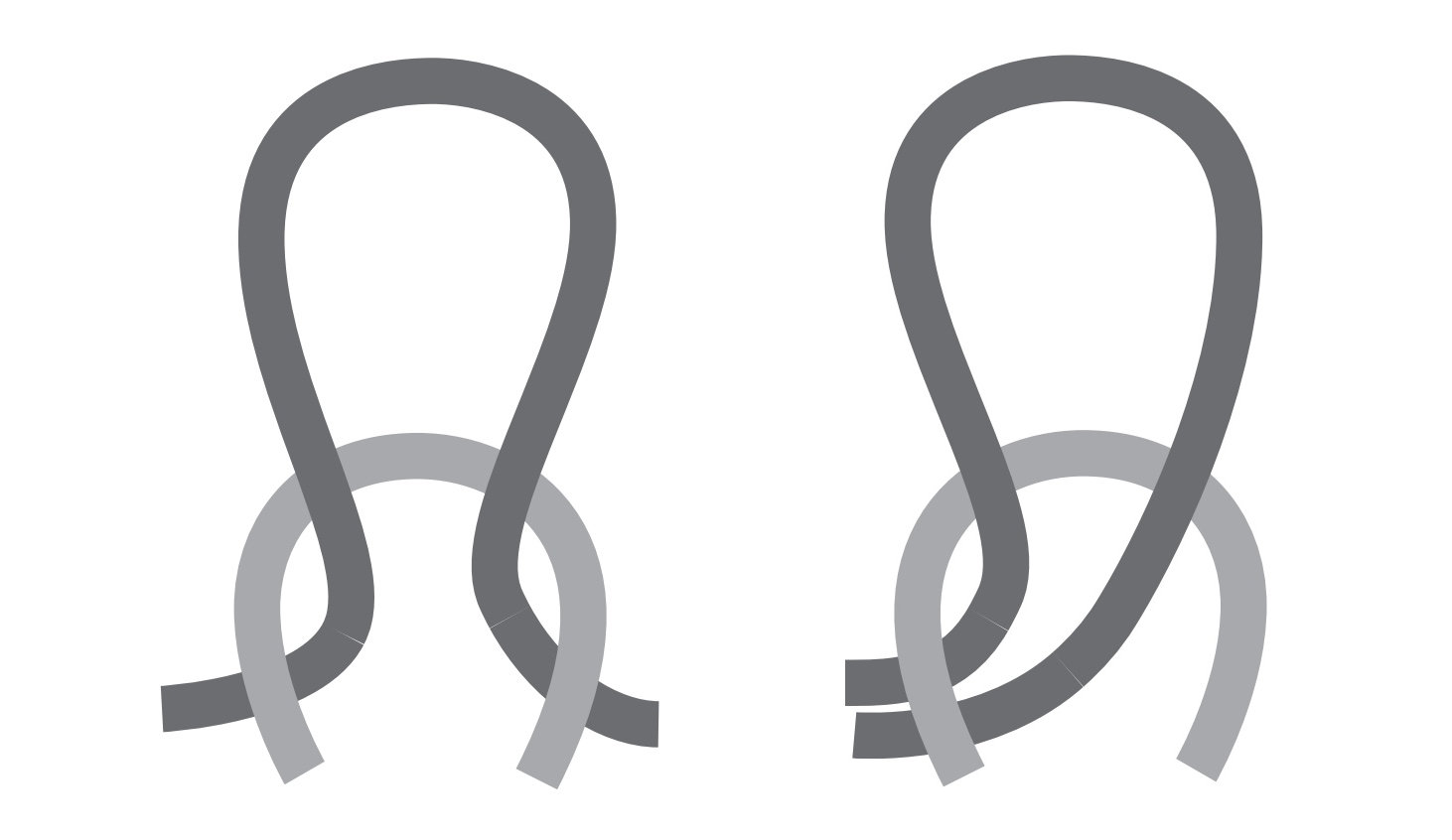 It can readily be seen how the symmetrical form relates to plain knitting. 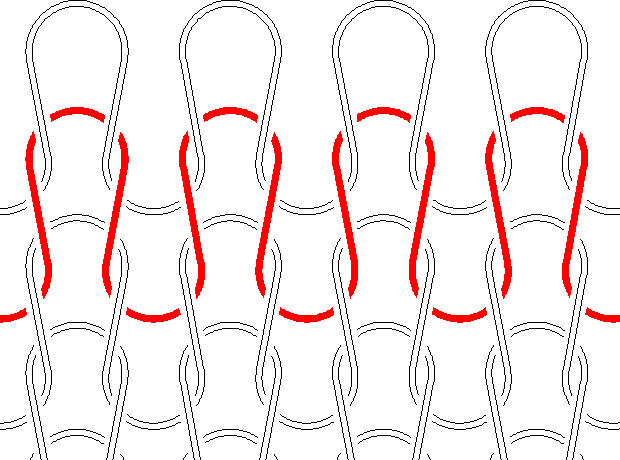 The asymmetrical form (fundamental to warp knitting) only needs to be envisioned horizontally for its relationship to plain crochet to be similarly apparent. 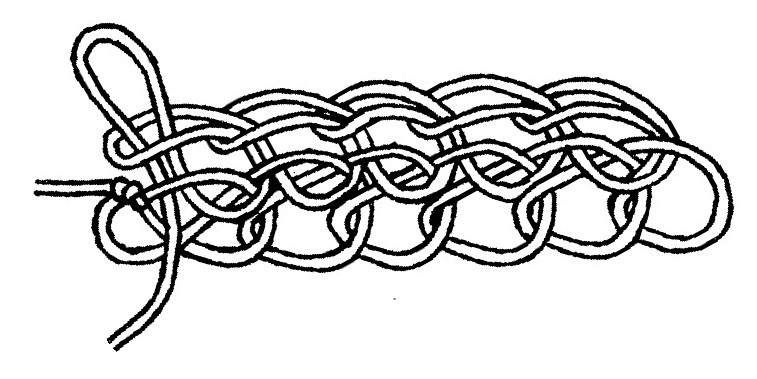 The height of both knitted and crocheted fabric grows as new chains are added to it. However, since chains of asymmetrical loops lie flat across the working edge of the fabric, the vertical increments are smaller than those of chains made from symmetrical loops of the same diameter. That difference is recovered and can be dramatically exceeded by a structural device specific to crochet. This adds height to a row of what would otherwise be plain crochet by interposing a “post” between each new chain and the chain capping the corresponding stitch in the preceding row.

The length of a post is determined by the number of times the yarn is wrapped around the hook during its production, and the position of each “yarnover” relative to the loop(s) in the preexisting fabric into which the hook is inserted. This variation is labeled with the familiar (albeit ambiguous) sequence double crochet, triple crochet, etc., each with an extended form that adds a vertically oriented chain to the post. It is also possible to insert the hook into the post in a preceding stitch, or through a combination of loops and posts, adding further variation to the repertoire.

Crocheted posts are structural elements of tricot, together with crochet-type and knit-type chains. As noted, many tricot stitches combine them in manners that permit the resulting fabric to be characterized as a structural hybrid of knitting and crochet. However, other tricot stitches cannot be described adequately in terms of either. The remaining tricot-specific structural attribute(s) will be considered in the next installment in this series (after revisiting a few other topics).