Schematic drawings of the slip stitch structure, identical to the ones seen in the preceding post, appear in published descriptions of other objects said to be nalbinding rather than crochet. Before considering individual such objects, I’m going to take a look at another way to use an eyed needle for producing not just crochet-type slip stitches but a variety of more complex structures normally identified as crochet.

In the present context, the difference between the two tools reduces to the single mechanical detail of whether the end that grasps the yarn is fully closed  — an eye — or is open on one side — a hook. The former holds the yarn more firmly and constrains its separation from the tool. The latter allows the yarn to be removed and reattached at any time but is conducive to unintentional separation. Both tools are otherwise made with dull and pointed tips, although that attribute is more relevant to the (by no means unrelated) comparison of ordinary and tambour embroidery.

In 1966, Angela Huber was granted US Patent no. 3,228,212 for a Method of Hand Knitting and Knitting Needle, five years after filing a corresponding application in Austria.

“This invention relates to a method of hand knitting and a knitting needle for it. Both the method and the needle distinguish by being particularly simple because only a single thread and a single needle are employed.”

An eyed needle used to push a new loop through a preexisting one, gauging its size with an adjustable collar. The patent illustrates both knit-type and crochet-type looping, showing only the latter here. 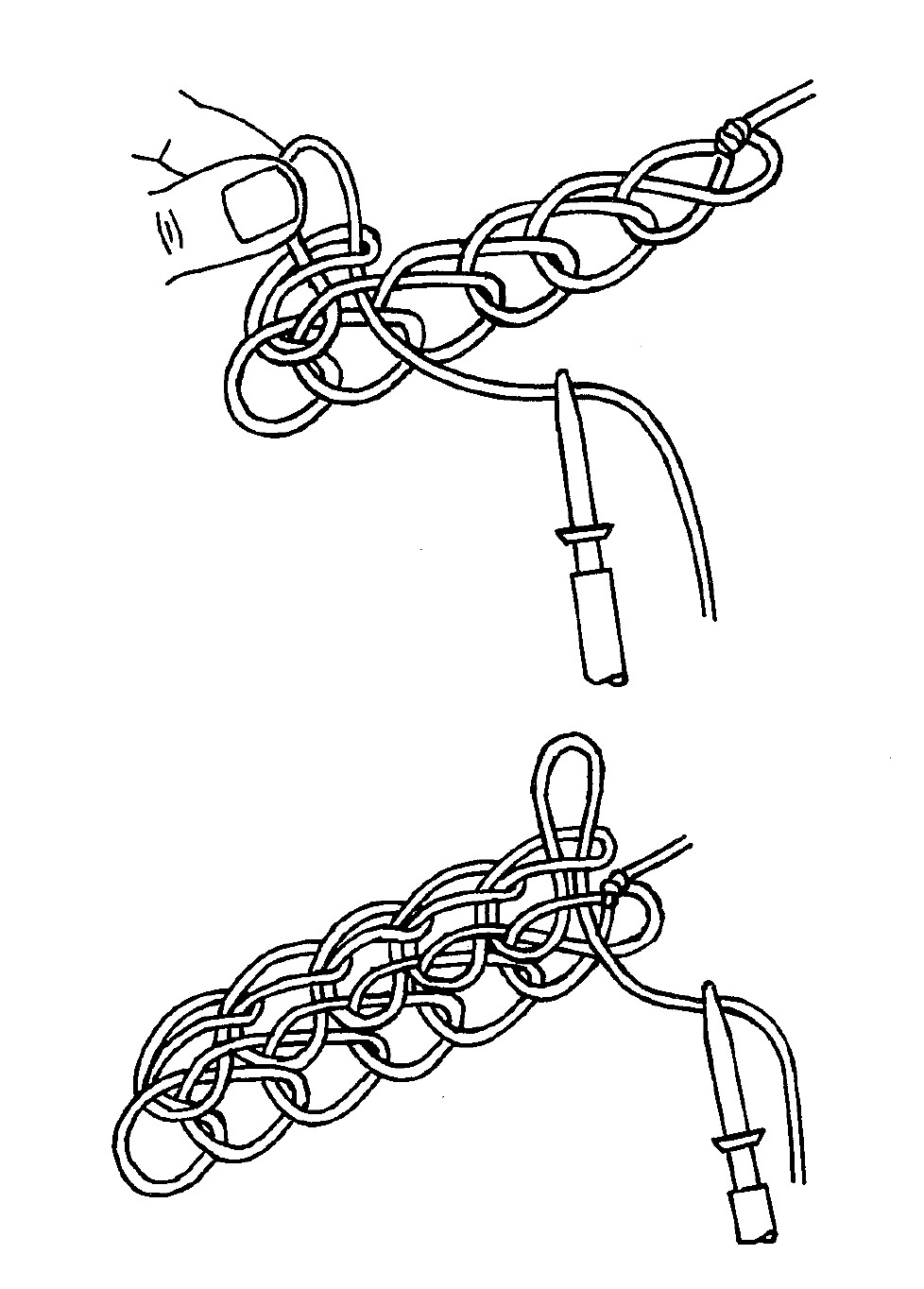 A tool of the same design was sold in the late 1960s as the “Grant One Needle Looper” with a pattern booklet titled Grant’s One Needle Looping. It was telemarketed shortly thereafter as “The Original K-Tel Knitter — a revolutionary new method of knitting and crocheting with one needle.”

There is no indication of the relationship between the Grant/K-Tel items and the Huber patent but the instruction booklet in the K-Tel package (and presumably also Grant’s) illustrates a “simplicity stitch” with essentially the same drawings as the preceding ones. 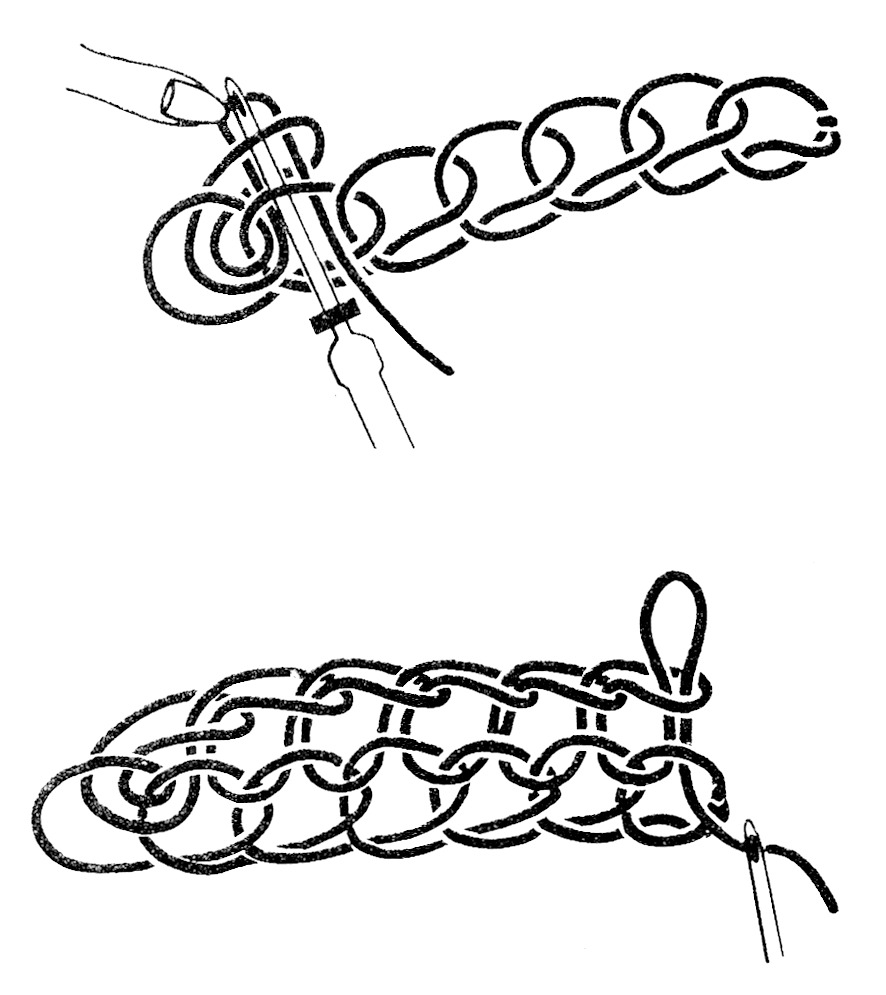 This technique is currently marketed as Fauxchét® using a composite needle that is identical to a standard machine knitting 1×2 transfer tool (but trademarked nonetheless). It is again unclear if there is a relationship to the Huber patent.

As is seen in other videos in that series, an eyed needle can be used in the same manner to make crochet stitches of increasing complexity. This can be compared to the production of hand knitted fabric on a peg loom instead of knitting needles. In both cases, the adherents to the conventional technique are in a substantial majority and have varying opinions about the utility of the alternative.

A similar comparison can be made between the structurally identical cross-knit looping made with an eyed needle, and twisted-stitch knitting made with knitting needles. This highlights why the discussion of the structure of a piece of fabric so often needs to be separated from that of the various tools and techniques that can be used to produce it. This is further demonstrated by the basic principle of a sewing machine, which is to push a loop of thread through fabric using the eyed end of a needle, and that of a knitting machine, using what is essentially a battery of crochet hooks to create vertically chained knitted structures.

The eyed end of the needle is also commonly used in hand embroidery to pass the working thread between preexisting stitches and the base fabric without risk of piercing either. With all this it mind, it is reasonable to wonder why a second point is frequently seen on archaeologically recovered needles such as those found at the Viking settlement in Birka and currently on display at the Swedish History Museum.

Similar needles from an earlier Celtic settlement in Colchester are on display at the British Museum.

Just as it is frequently impossible to look at a piece of looped fabric and know what tools were involved in its production, a tool doesn’t always reveal what it was used for. It is safe to assume that it had a primary function. However, for example, it does not follow from the similarity between the second needle from the top in this photo and the needles used in the Nordic nalbinding tradition, as first documented in the 1940s, that the older implement was ever used for that craft. In fact, it cannot be proven that it was intended for work with yarn at all.

With the same caveat, if historical precedent for the production of crochet-type slip stitch fabric using an eyed needle can be established, one with two points at longer and shorter distances from the eye would easily support either of the techniques we’ve now seen.

8 thoughts on “Crochet with an eyed needle”