The earliest instructions for any form of crochet yet noted are in the Roland de la Platière Encyclopédie Méthodique, from 1785. This includes an extensive section on industrial knitting, and manual “nail knitting” is used to illustrate the way an individual stitch is formed on a knitting machine. In contrast to the smooth-tipped needles now associated with hand knitting, a knitting machine works the yarn with hooks (in the manner a previous post suggests was applied to the far earlier Celtic and Viking wirework knitting; coming posts will discuss industrial knitting further). The Encyclopédie includes no illustrations of any other form of hand knitting.

The engraving appears in a separate volume and the caption provides additional detail: 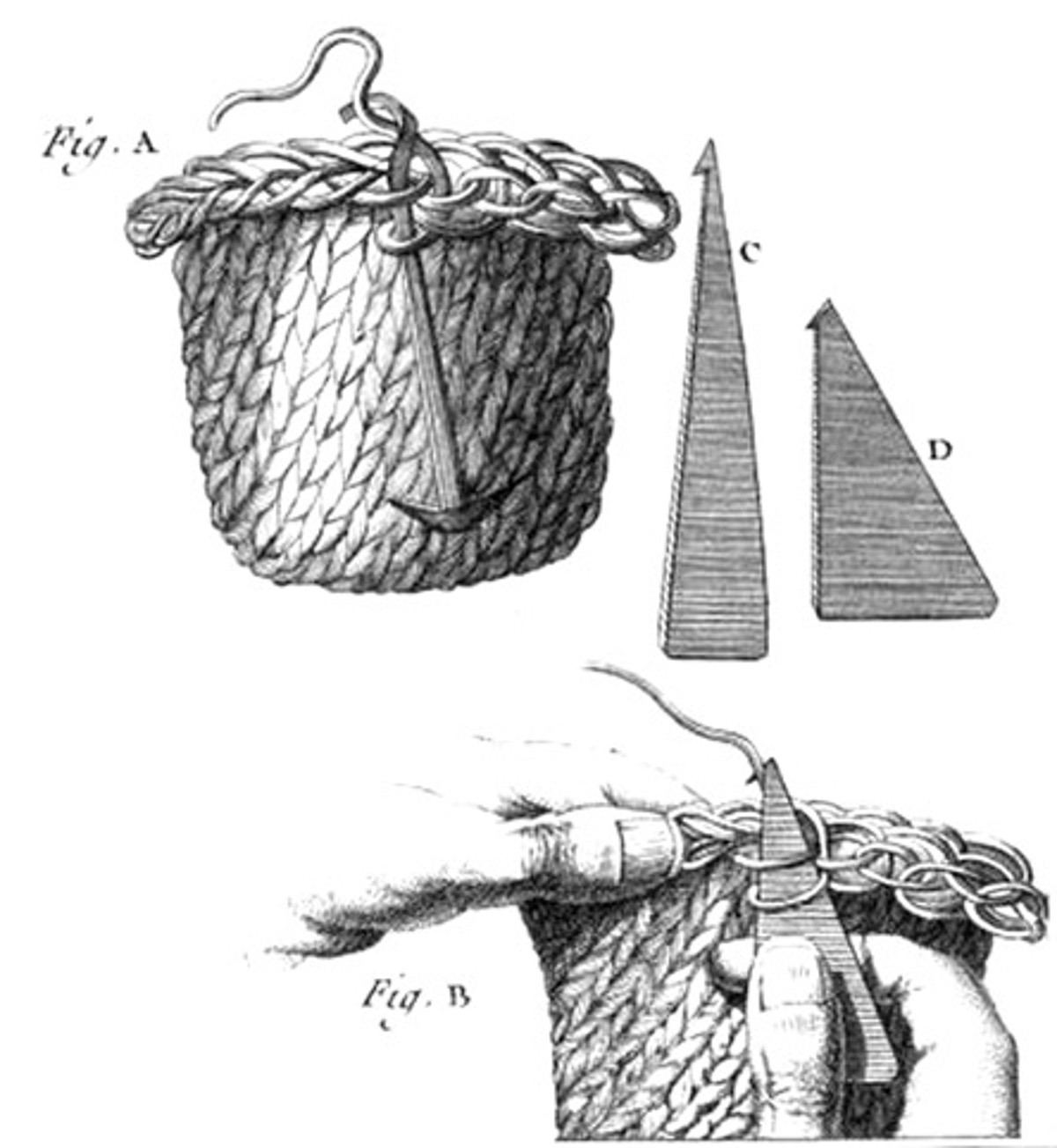 Fig. A, Example of knitting done on a nail, a type of finger for a glove worked in twine, designed as represented in the drawing.
Fig. C, crochet substituted for the nail, shown at scale [in the printed edition].
Fig. D, crochet intended for use with very large objects, and which is larger to produce more open stitches.
Fig. B, Another example of tricot au clou made with a crochet.

Here are the instructions:

“This is the name given to a way of knitting gloves [gants] devised by off-duty soldiers using a nail with a bent tip or a more convenient special hook [crochet], done in the following manner. The wool or thread intended for this purpose is wrapped twice around the first two fingers of the left hand, forming a sort of double loop. The hook is inserted into it grabbing and pulling the rest of the thread through, forming a new loop. Then, without removing the hook from it, more thread is pulled through the stitch or loop just made. Continuing in this way a first row of stitches is formed, longer or shorter as needed for the designated object. These steps are reversed at the end of the row. That is to say, the hook is inserted into the side of the first stitch and the same process is continuously repeated. This forms a round piece of knitting with horizontally positioned stitches worked repeatedly into themselves.

The gloves are started at the tip of a finger. The fingers are all made separately and then joined by hand. It is necessary to hold the work firmly in the left hand since the hook is moved under the left thumb. It is inserted from the right into the lower side of the stitch and draws a new loop through each one successively.

A certain size thread is required for this work. If it is too fine, the action of the hook would soon wear it out. Additionally, the knitting is less resistant to crosswise stretching, and whatever material is used, and no matter how well it is worked, it cannot last as long as ordinary knitting.

The front side of this knitting is turned to the inside of gloves, so the back is shown here. It does not have the usual appearance of a purl stitch but more that of barleycorns arranged diagonally. Someone who does not know how these gloves are finished will be puzzled by how they were worked. Moreover, it is easy to vary the appearance of the stitches. Differences are produced by working them to the left or to the right, or into the top or the bottom [edge of the loop].”

The reference to stitches being worked to the left or right is particularly important. It highlights a facility provided by a flat hook held vertically that was lost when the orientation of a crochet hook changed to what is now customary. All that is necessary to reverse the direction of the stitching is to turn the hook accordingly. It points to the left in the illustration but can as easily point to the right. Its up-and-down movement while stitching has no aspect of right or left handedness, nor does the lateral direction in which it moves as the stitching progresses. (This appears again in a description of German slip stitch practice prior to 1780, published in 1800, that will be presented in a separate post.)

The scale of the “type of finger” shown in the illustration indicates that it is a mitten. Since the explicit term mitaine was in use at the time, it is unclear whether the separately made fingers in the instructions are the one in the illustration plus a thumb, or whether a full five-fingered glove is being described. Although the wording does seem to indicate the latter, its likelihood is reduced by the admonition about the technique not being appropriate for lighter yarn.

Regardless of how many fingers it has, turning a glove inside out after it is finished is reasonable in itself, and the stitch in progress is consistent with de la Platière’s instructions. Following them yields precisely the same front-loop-only yarn-under-hook slip stitch crochet that is described in the early Victorian instructions as “shepherd’s knitting” and is discussed in several previous posts. The appearance of the front side of such fabric is aptly described as “barleycorns arranged diagonally” (clearly shown in the photo of a Scottish bootee from circa 1780 in this post).

The part of the mitten in the illustration is still being worked and would therefore show the front of the fabric. Although it is difficult to see a match between it and the prescribed form of stitching, it has no resemblance whatsoever to the back of such fabric. If anything, that could be described as horizontally oriented stockinette, with the barleycorn analogy being totally inappropriate.

There is no apparent way to reconcile the discrepancies between the text, illustration, and results of following the instructions. However, it can be noted that they are no more extreme than corresponding flaws in the graphic and narrative components of most early descriptions of crochet and comparable crafts.