The earliest text describing and comparing various forms of hand knitting that has yet come to light is “The art of knitting in its full extent” (Die Kunst zu stricken in ihrem ganzen Umfange), published in 1800 by Johann Friedrich Netto and Friedrich Leonhard Lehmann. An earlier post covered their description of work with hook tipped knitting needles. The following material extends this with their discussion of knitting with a single hook-tipped tool, identical to the one from 1785 illustrated in the preceding post. The reference date for their introductory mention of it as “not an entirely new invention” was 1780 but they don’t indicate how long before then the described technique was in practice.

“The hook knitting mentioned previously is not an entirely new invention but was once limited to winter shoes and boots. Primarily in Leipzig, the uppers of many hundreds of pairs of shoes were knit from ordinary white sheep wool yarn with a hook that was commonly made from the handle of a spoon to save expense. (A more exact description of this follows below in the explanation of the plates.) The knitted shoe uppers were then dyed black, fitted with soles and heels, lined with coarse felt, and shipped far and wide.

The simplicity and rapidity of this hook knitting caught our attention and we were delighted by the complete success of our attempts at using it for other forms of knitting. One can knit all sorts of colored borders, flowers, arabesques, etc., with the hook, just as with knitting needles.

The hook used for this is illustrated on Plate 15, Images 1, 2, and 3. First one wraps a single simple loop around it (see the small number 1 on the hook in image 1) and holds it in the left hand exactly as illustrated, so that the notch in the tip of the hook is on the left side. The thread is then led under the shaft as shown at number two (at the notch on image 1) and positioned in the notch above toward the right side. From here, the right hand draws the hook under the left, whereby the left hand slides the loop over both the newly formed stitch and the tip of the hook. The thread is placed repeatedly under the shaft and over the tip of the hook and the new loop is drawn through the old.

When the first row is finished and one wishes to knit back again from the right hand side, as with a blanket, the hook is inserted leftward into the last stitch (one remains on the hook) from below. Working in the same direction as just taught, the thread is again led under the hook and up over the notch, as shown on the plate. The left hand then slides off two stitches (see the hook in image 3), namely the one that was on the hook at number 2, and the one newly formed by inserting through 1 over 3. This continues by repeatedly inserting the hook to the left into the adjacent stitch. 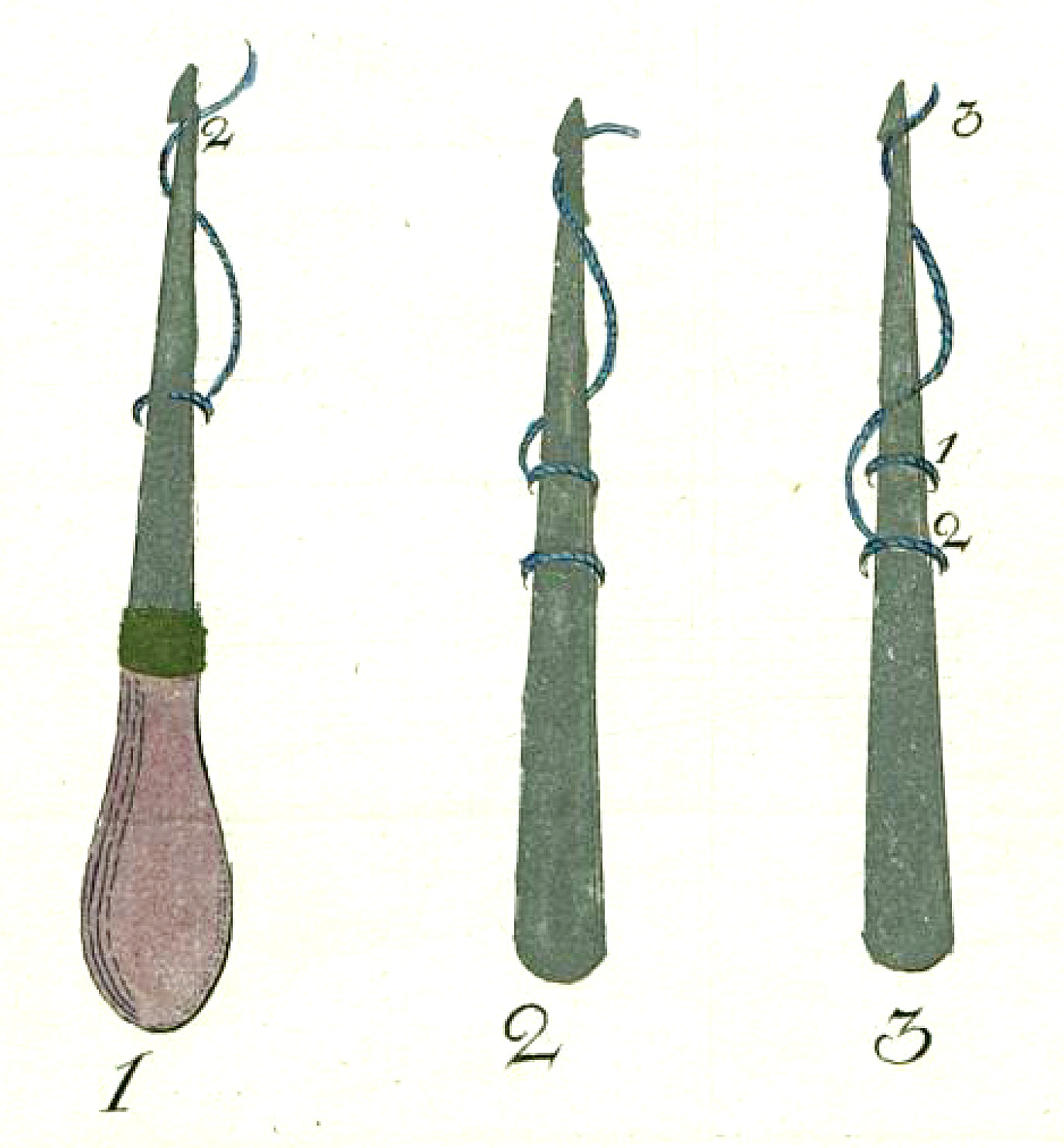 The hooks for knitting on Plate 15 must be made in the following manner. The shaft may not be over one sixth of an inch thick [Leipzig standard ≈ 4 mm], at most, i.e. like a medium knife blade. The shape of the hook is conical to make it all the more convenient to slide off the stitches and can be half an inch wide at the bottom. The point of the hook must turn inwards, so that it does not snag when pulling through. No. 1 has a wooden handle but that can also be done without.

If flowers and the like are to be added to the knitting, colored yarn is pulled into the first or second preceding stitch with a knitting needle that has a hook at its tip. Placing the flower on it, the colored thread is looped around the hook and worked into a stitch.

Hook knitting can also be worked from the left as with ordinary knitting. The only difference is the positioning of the thread. Instead of leading it under the shaft as usual, it is first passed over the shaft and then led under it. It is then drawn upward into the notch as seen on hook no. 2 [incorrectly ‘3’ in the original].

Round pieces, for example oval rugs for covered floors, are also amenable to knitting with the hook. First a row of stitches is made about two feet long [565 mm] always knitting toward the right side. Then going diagonally down and back two stitches, oval rounds are knit to the left until the middle section reaches the intended size. A light-colored border can then be knit around it a half foot wide, and it can be decorated in the middle with arabesques or other leaf work in indigo colored yarn. When the border is done, another half foot is knit around it in the main color. Finally, the stitches are looped tightly together at the edge with the thread, one after the other.

Stockings can also be knit with the hook. A row of stitches is made of a length that, when held together at its ends, has the width of the intended stocking. The hook is inserted into the first stitch that was made and a new one pulled through it so that the entire row forms a circle which is then knit continuously in the round. A stitch is increased by making a new loop as at the outset and pulling it again through the same stitch. A decrease, on the other hand, is worked into two adjacent stitches simultaneously.

It need not be pointed out that the entire bodies of vests and leggings can be knit in this manner with the hook. For plush knitting, the thread on the second ball from which the pile is to be made (§ 10) is first placed in the notch and then pulled through in a loop. However, since the hook will be inserted deeply into the stitch, the thread from the pile ball needs to be pulled back a bit because the loop will otherwise be too long.

Hook knitting is recommended above all for purses. The stitches for this are created by wrapping the thread as already described for hook no. 3. Picots are formed by wrapping the thread around the hook twice as on no. 2, before positioning it in the mouth of the hook, thereby forming a long stitch. Once the hook is pulled through, these long stitches need to be placed around a small stick or heavy needle, as with netting, until the hook comes around again and completes the proper stitch.

This hook knitting resembles the manner in which Dübois used his hooked knitting needles to knit with such amazing rapidity. We are convinced that many of our lovely readers will apply their special womanly artistry to this knitting and soon bring it to the highest perfection.”

The basic descriptions of the flat hook and its vertical orientation are essentially the same as those in de la Platière’s text from 1785. However, Netto and Lehmann provide more detail about changing the direction of the stitching at the end of a row worked flat, as with the blanket described at the end of §39.

The 1785 instructions simply note that a new stitch can be worked into the preceding one either from the right or from the left. One obvious way for changing the working direction would be to turn the notched-side of the hook accordingly. The 1800 instructions are more specific about this and leave the hook in the same position throughout. Instead, the direction of the work determines whether the yarn is wrapped around the hook yarn-under as is usual for German knitting and shown in Figs. 1 and 3, or the later crochet standard yarn-over shown in Fig. 2.

A cylindrical hook-tipped knitting needle is presumably better suited for holding a flower as described in §40 than a tapered flat hook would be. Given that Netto had both tools at hand, a question remains about why he neither mentions, nor perhaps even considered, the use of the cylindrical tool for hook knitting. That craft was on the verge of a major step toward “highest perfection” as the crochet that would be described only two decades later in Holland. It is reasonable to suspect that the pivotal coopting of the similarly cylindrical tambour needle — a tool with which Netto was otherwise fully familiar — had taken place by the time of his writing about hook knitting.

The German term for the plush knitting discussed in §43 is Felbel (possibly a cognate of velvet). The parenthetical reference to §10 leads to a description of making warm fabric by pulling a short loop of thinner yarn through every sixth stitch in the base fabric, or if greater warmth is desired, through every fourth stitch.