Crochet hooks are used as auxiliary tools in other crafts, either in their original form or adapted to the alternate context. It is, for example, a matter of personal preference whether a knitter uses an ordinary crochet hook to reknit the ladder resulting from a dropped stitch, or a specialized repair hook modified for the purpose. That redesign typically involves shortening the shaft of the hook and shaping its other end either into a second hook or a pointed tip. Another example is the hook used for joining elements in tatting. This will be either a stock crochet hook or one with a shortened shaft with a metal chain and ring attached to the other end so that it can be held ready on a finger. (The truncated shaft and hole for the chain are telltale, even when the chain itself is missing.)

The tatting variant is also marketed as a compact alternative for crochet, illustrating the interesting question of how a multipurpose tool should be categorized and labeled. This becomes even more complex given the potential utility of hooks made to serve some unrelated purpose, for working crocheted fabric. The converse situation is also of historiographic significance. If something that looks like a crochet hook is found in an archaeological context that can in no way be associated with the production of fabric — to say nothing of its crocheted form — the hook does not constitute such evidence without robust external corroboration. (Although not the focus of this post, both perspectives also pertain to eyed needles and nalbinding.)

When the intention of the manufacturer is known and there is any divergence between purpose for which the tool was made and the one to which it is applied, this can easily be indicated. However, we do not have to move into the particularly distant past for that distinction to blur. There is little need to hesitate before identifying the lower of the two hooks shown here as a shepherd’s hook. Although nothing is known of its provenance, it was acquired in England and matches the stereotype description of being flat, made of bone, and thumb sized — and easily passes a hands-on test in comfortable use for shepherd’s knitting.

No such interpretation is needed for the upper hook. It is stamped “Susan Bates USA SIZE 4” and is a common form of crochet hook made in bone, colloquially termed an “ice cream cone” hook because of the finial design and conical expansion toward it. Bates manufactured and marketed them widely through the 1950s, and they are still relatively easy to acquire under that label and others, as well as unbranded.

The ice cream cone design has a round cross section and tapers far less extremely than the shepherd’s hook does. However, the heads on both are smaller than the shafts, facilitating the insertion of the hook into a preexisting stitch. The tapered shaft can ease tight stitches and also enables gauging new loops through a range of sizes — albeit less markedly than with a shepherd’s hook. These features are of particular utility when working slip stitch crochet. It is therefore worth at least wondering if the termination of production of tapered ordinary crochet hooks had any connection with the disappearance of the slip stitch from the mainstream repertoire of stitches used for producing solid crochet fabric.

The onramp to that transition is seen a century earlier in elementary French instructions for crochet from 1848. These show a bone hook and note:

“When choosing a hook to be used with wool, one in bone or ivory should be taken, rather than steel, with a round shank rather than flat; the latter form has disadvantages. It must be of suitable length, and the tip of a size that is perfectly matched to the yarn, so that the edge does not project through it.”

The taper of the hook in the drawing is more pronounced than is typically seen with extant older bone hooks of that design, which is otherwise about the same as that of the ice cream cone hooks. There is also a form that retains the length of a shepherd’s hook and has a strong taper, but adopts the ascendent round cross section, flattening it only toward the tip.

Such hooks have been dismissed as intended for tatting, rather than crochet, because of their short length. If anything, though, this might be expected to reflect the preference of an accustomed user of flat hooks. The tips are also far larger than is appropriate for tatting, which as a form of lace, now normally uses a fine gauge steel crochet hook as the adjunct tool. The upper hook in the next photo is clearly intended for tatting as indicated by a uniform thickness of 1 mm, the chain and ring, and its small tip. 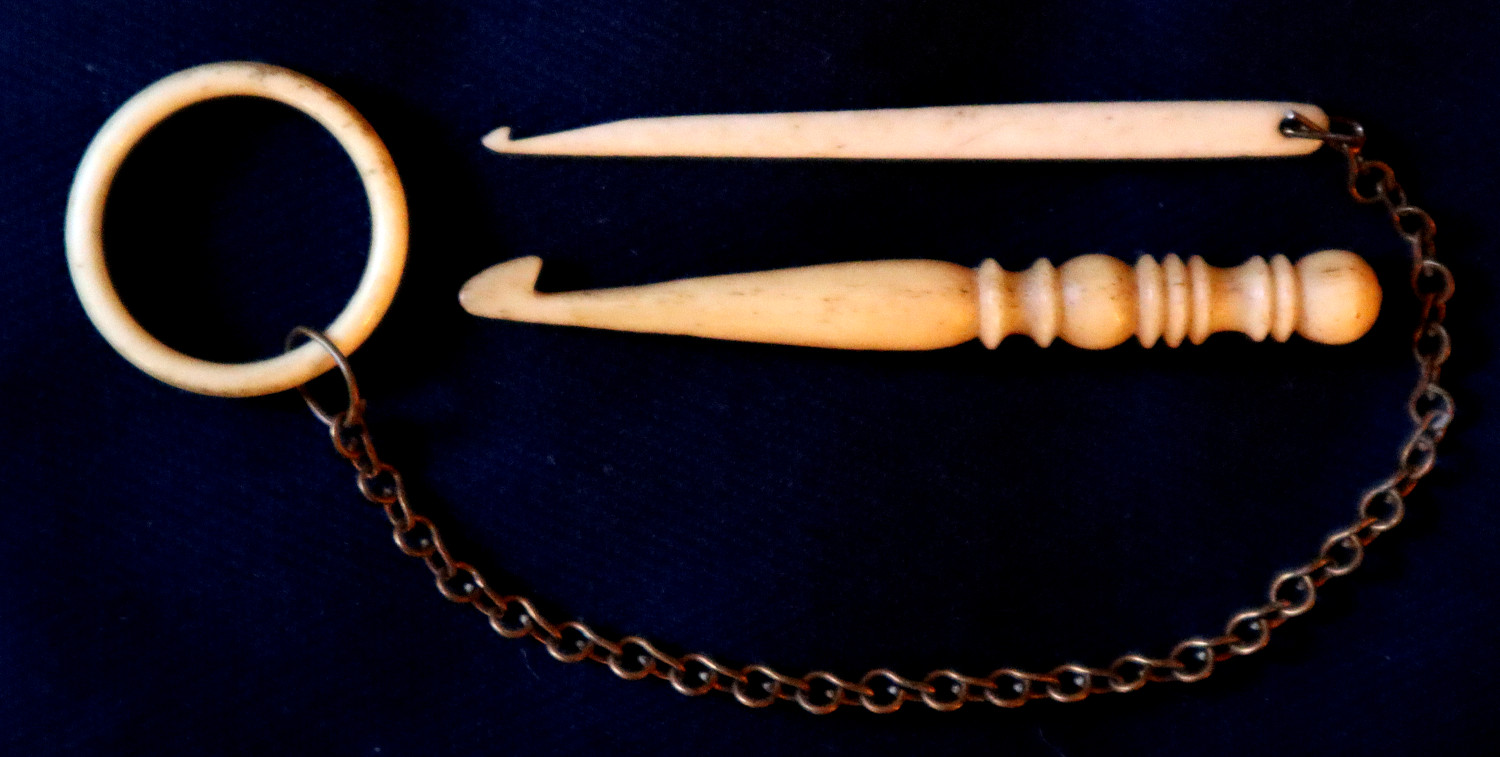 The other types of hooks considered here are all found in the craft literature, but what might be called a conical shepherd’s hook is not similarly corroborated. Conical hooks are also sometimes found together with awls of matching proportion and decoration, suggesting paired tools for making or widening an opening, and then pulling something through it.

Although such hooks may have been intended primarily for a purpose other than the one I am suggesting here, or were simply general purpose, they provide the same basic functionality that flat shepherd’s hooks do. The round cross section adds the further facility of the hook being easily rotated to position its head at any desired angle toward the fabric. A flat hook affords no such flexibility, which may be one of the disadvantages noted in the 1848 text.

Illustrations in tutorial texts from the latter part of the 19th century and into the 20th frequently normalize the type of hook shown in instructions to the long cylindrical form now associated specifically with Tunisian crochet. However, it also appears with the full range of ordinary crochet stitches, including the slip stitch, as drawn and photographed in 1886 and 1918.

This was not merely a pedagogical expedient but reflects a common practice of the day, witnessed by photographs of people engaged in what appears to be ordinary crochet using long hooks. The drawing and photo also demonstrate that a tapered hook was no longer a requisite for the production of slip stitch fabric. Regional slip stitch traditions employed flat shepherd’s hooks throughout and there is evidence into the mid-19th century of their being found on the urban worktable. What I am labeling conical shepherd’s hooks appear even later in the same environment. Whatever purpose may have put them there if not for slip stitch crochet, they are demonstrably useful for that craft.