The initial version of this post announced a forthcoming article that has since been published in the Summer 2020 issue of The Journal of Dress History, titled “The Princess Frederick William Stitch: The Parallel Emergence of Long–Hook Crochet in Prussia and England in 1858.” It discusses the first appearances of the various names given to what is now more uniformly called Tunisian crochet, together with illustrated instructions for the garments and accessories to which those names were applied.

The article has its roots in an unpublished presentation I made at the Knitting History Forum conference in London in November 2018 but is significantly expanded. In keeping with one of the primary purposes of this blog, the present post and one or two more will go into further depth on selected topics covered in the article. The material presented below discusses a biographical detail about Matilda Marian Pullan, who coined the name Princess Frederick William Stitch.

The article doesn’t provide biographical information about her or any of the other mid- and late-19th-century authors whose work is cited, beyond indicating the years of their births and deaths. However, official records and other documents that date central events in Pullan’s life do not fully agree on her birth year. The only concern this caused during the preparation of the article was whether that year should be indicated as “1819” or “circa 1820.” Nonetheless, The Journal of Dress History maintains high standards of bibliographic precision and I made an effort to pin down the exact date. A description of that process seems a fitting supplement to the article.

Pullan’s birth year is given as 1819 in a detailed study by Marianne van Remoortel published in 2012, Threads of Life: Matilda Marian Pullan (1819-1862), Needlework Instruction, and the Periodical Press. A similar biographical study by Jolein De Ridder and van Remoortel about Eliza Warren, another subject of my article and erstwhile collaborator of Pullan’s, appeared in 2011 with the title, Not “Simply Mrs. Warren”: Eliza Warren Francis (1810-1900) and the Ladies’ Treasury. Both were collated with additional studies by van Remoortel about significant women in the publishing field, in a book she published in 2015, Women, Work and the Victorian Periodical: Living by the Press.

The source van Remoortel cites for the 1819 birth year is A critical dictionary of English literature and British and American authors, living and deceased, from the earliest accounts to the latter half of the nineteenth century, by Samuel Austin Allibone, published in 1899. However, the entry for Pullan on the indicated page states that her birth year was 1821.

This inconsistency is what I then set out to clarify by consulting official records of key events in her life.

A database indexing Ireland Births and Baptisms, 1620–1911, maintained in Salt Lake City, Utah, contains an entry for a Natilda [sic] Marianne Chesney, born in 1819, in Newry, County Down, Ireland, the daughter of Charles Cornwallis and Sophia Augustus Chesney. The General Francis Rawdon Chesney named by Allibone was also born in County Down, as was his nephew, Pullan’s younger brother Charles Cornwallis Chesney, Jr. Their father and the General’s brother, Charles Cornwallis Chesney Sr., appears in the same database as his daughter does, also naming their relationship, but the location of his birth is not provided.

There is no doubt about the birth record being that of Matilda Marian Pullan despite the misspelling of her first name. It is possible that the compiler(s) of the index incorrectly transcribed the document it is based on and there is a similar possibility of the mistranscription of her birth year. As will be seen below, Pullan attested a date later with her own signature on a marriage certificate in 1855.

The United Kingdom Census taken on 6 June 1841 records a 20-year-old Matilda Chesney, born in Ireland and working as a governess in Yorkshire. If she had not yet passed her birthday, this would set her birth year to 1820. Otherwise, it would have been 1821, making this census record a likely source of the date provided by Allibone. However, Pullan would not have been the member of the household who provided the information to the census taker.

The first dated document I located that was actually signed by Matilda Mary Anne Chesney is the certificate of her marriage to Samuel Pullan but it doesn’t indicate her age.

The United Kingdom Census taken on 30 March 1851, lists a 31-year-old Matilda M. Pullan, Authoress and Needlework Designer, born in Ireland, whose birth year would have been 1819 if her birthday was later than 30 March. Since Pullan is listed as the head of her household, she would have provided this information directly to the census taker. 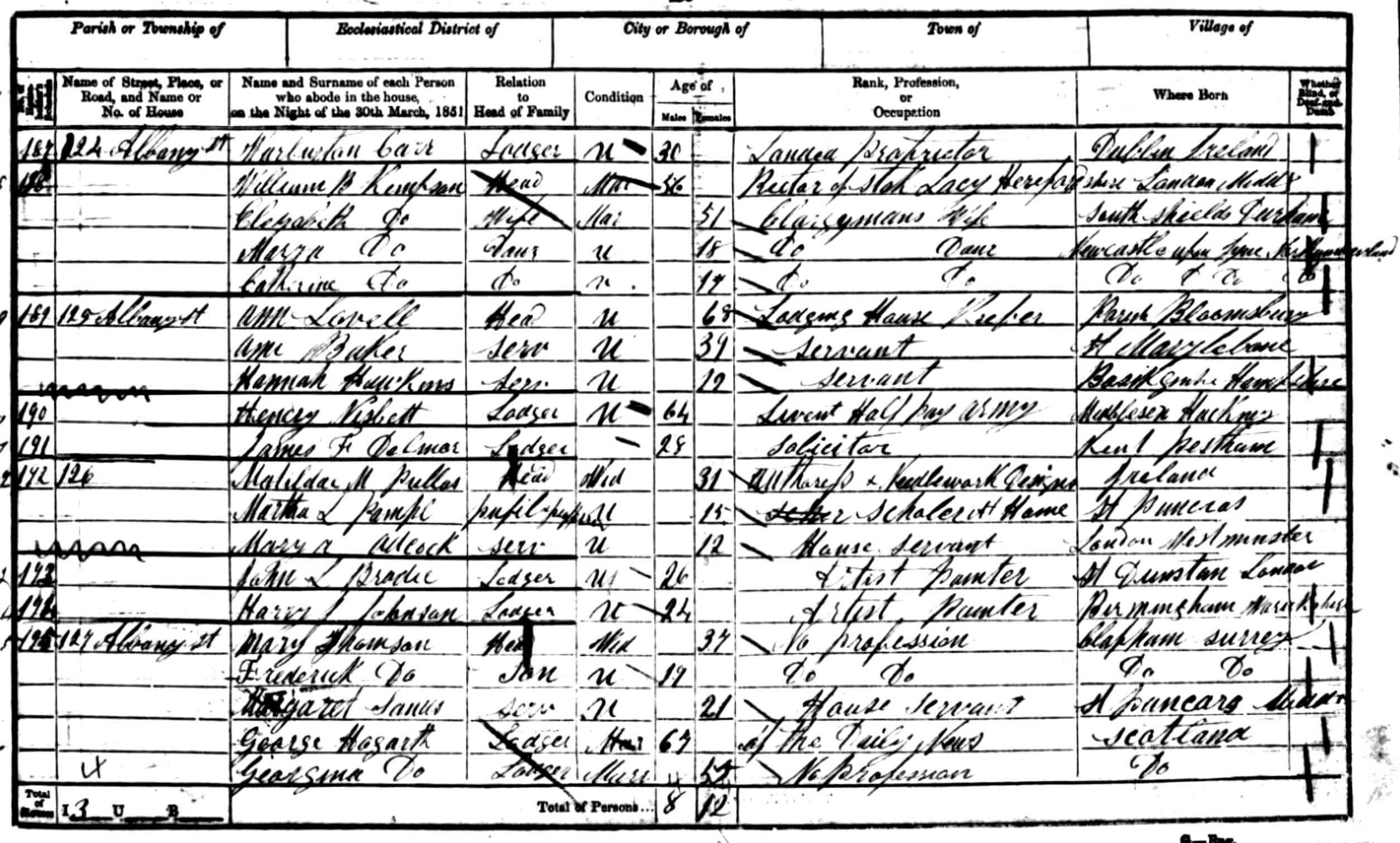 The next document I located that Pullan signed was the certificate of her marriage to Thomas Smith Metcalfe. This has her directly attesting the year of her birth to either 1822 or 1823, again depending on her birthday.

There is no apparent explanation for the interval between either date and 1819, unless she was deliberately reducing the recorded difference in age between herself and Mr. Metcalfe. The remaining document to be considered, written after their separation, is again consistent with the earlier birth year.

The Port of New York record of the passengers arriving on the SS North Star from Bremen and Southampton on 19 December 1857 includes a 37-year-old Matilda Metcalf from England. Yet again, she would personally have been the oral source of the recorded information (notwithstanding the omitted final silent vowel in the transcription of her name).

The introduction to the book in which Pullan dubbed the Princess Frederick William Stitch provides a florid account of her relocation from London to New York City and is signed “The Author, Brooklyn, October 1858.” There is virtually no doubt that the immigration record is hers and, assuming she celebrated her birthday after arriving, Matilda Marian Pullan’s birthdate can safely be set to December 1819.