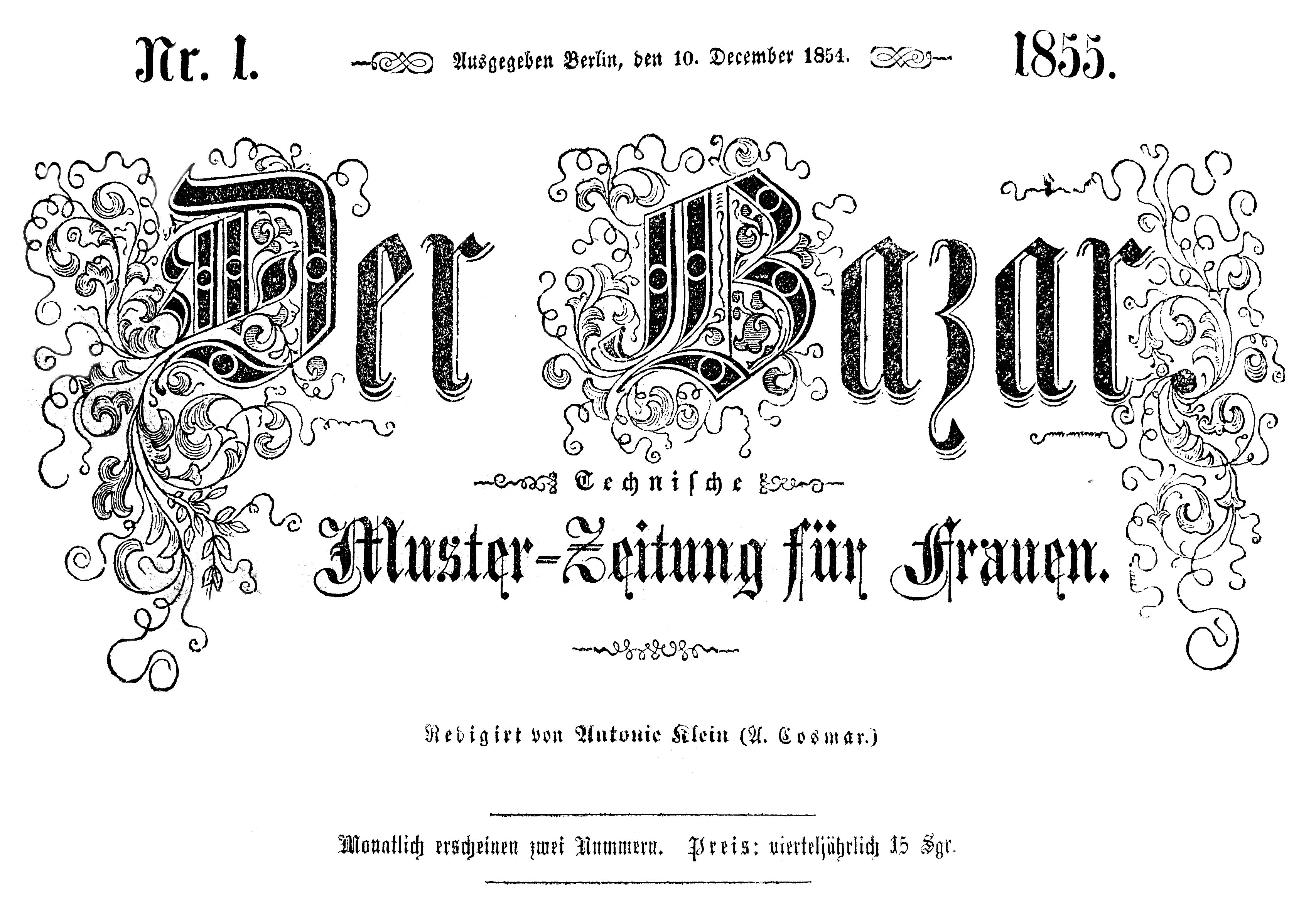 “Technical” was dropped from the masthead in the 15 March 1855 issue and the one from 1 January 1856 extended “Women” to “Women and Daughters.” 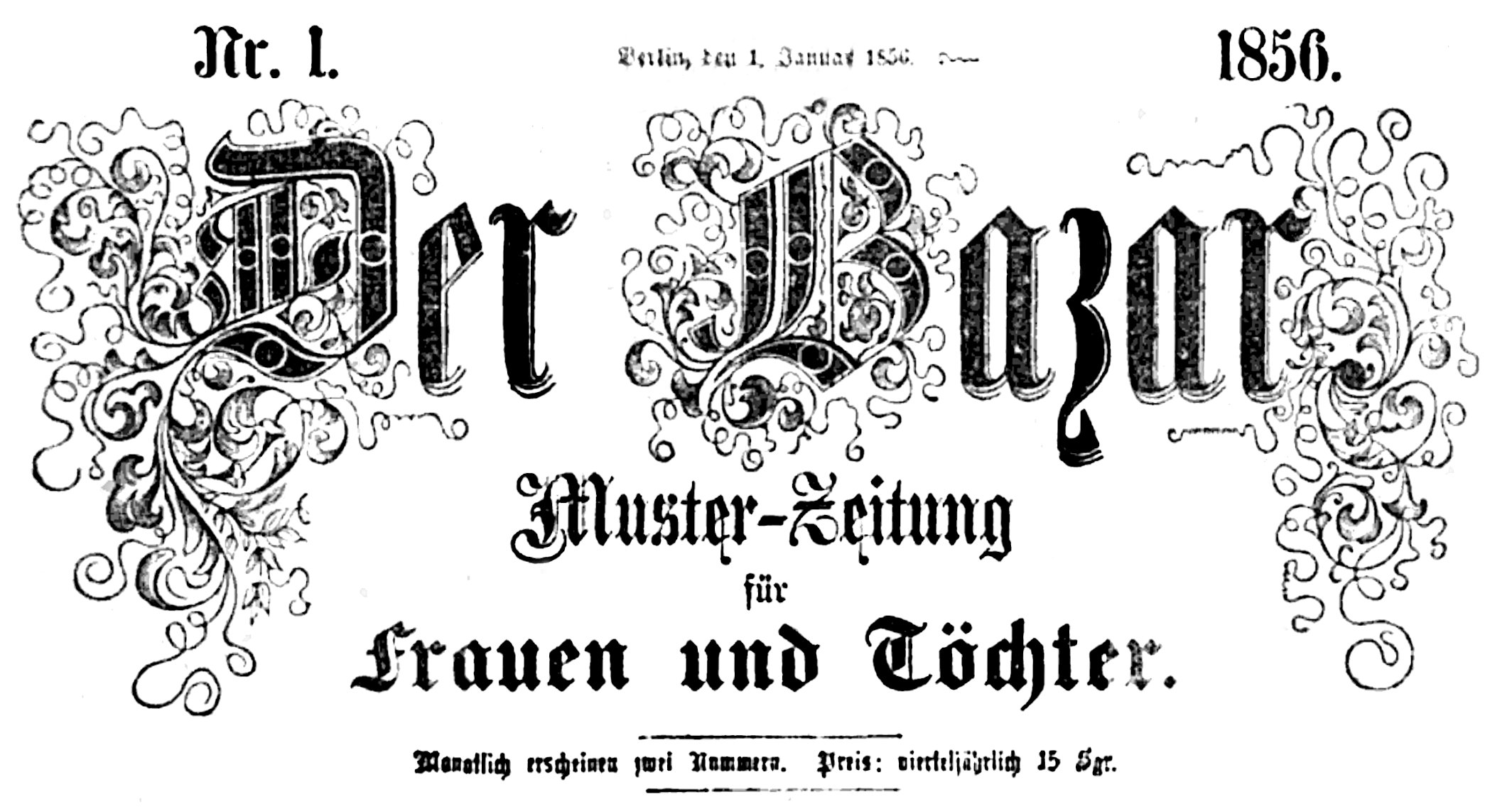 The masthead changed again with the 1 January 1857 issue, which also marked a shift to weekly production. Issues dedicated to fashion and handicraft appeared on the established biweekly schedule but alternated with what was effectively a second biweekly series in the same eight-page format, focused on literary themes. The title Der Bazar was retained but the subtitle was changed to Berliner illustrirte Damen-Zeitung — the “Berlin Illustrated Women’s Magazine.”

At the time of the 14th-anniversary retrospective, the publication’s editorial offices were in Berlin with production ateliers there and in Paris. The printing and distribution facilities were in Leipzig. 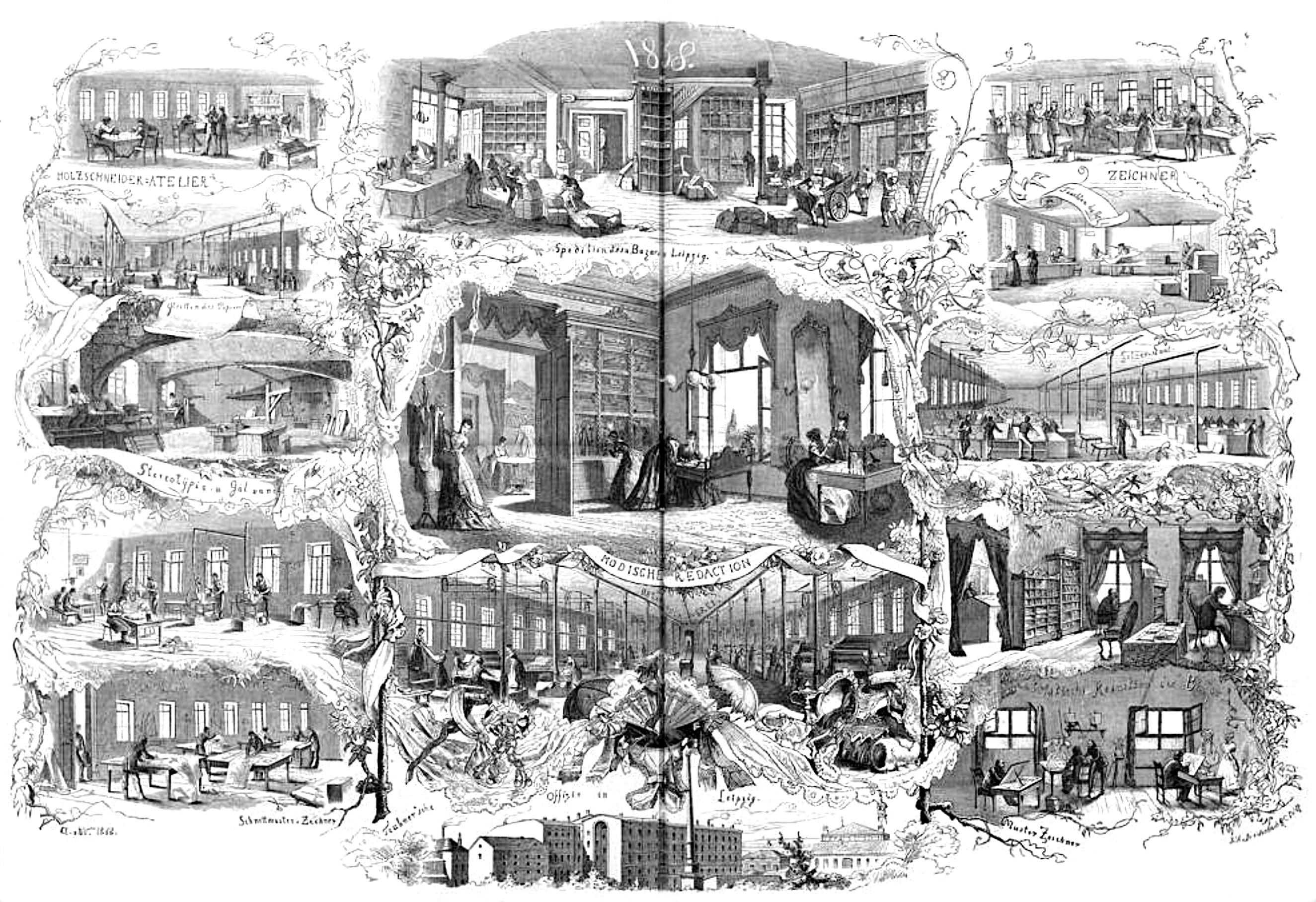 The 1868 article appeared in an issue focused on literary themes, rather than in the sequence dealing with handicraft. In consequence, it is framed as a florid narrative rather than in the terser voice used with the technical material. There is a lengthy discussion of the organization before focus turns to the description of how original designs and illustrated instructions were prepared for distribution both in Germany and to an extensive international syndicate.

The following excerpted passages are those of the clearest relevance to loopcraft and represent only a fraction of the full text. They indicate what the production of Der Bazar entailed nonetheless. (I’ll provide a similar digest about the international network in a separate post.)

About Bazar
A retrospective for our men and women readers

The main editorial offices are in Berlin, on Unter den Linden, in the most beautiful part of the city. In keeping with the aims of our publication, the editorial facility is divided into one for the so-called work issues, and another for literature.

We believe it correct to assume that our readers are more interested in hearing about the first of them and above all wish to visit those of its chambers where an answer is to be found to the important question, “How should I dress?” Let us step inside.

Through a series of antechambers, where models and pieces that have already been published are stored in chests, we get to the editorial office for the Division of Fashion and Handicraft. This is led by an Editress-in-Chief [Chefredactrice] to whom six women are subordinate.

Tall well-lit rooms into which the noise of the street barely penetrates. Mirrors on the walls, here and there an idyllic potted plant or cut flowers on a windowsill, the sofas and armchairs overflowing with fabric and models for all kinds of dresses, jackets, blouses, capes, etc., etc. On the tables, embroidery and handicraft, hoods together with caps and hats, garment patterns, fabric samples, boxes, jewelry, sketches, and woodcuts. In the corners, heavily laden clothes stands, dress forms, and manikins. In the cabinets, with glass doors that allow us to look inside, yet again clothing accessories of all kinds, lingerie, etc., etc. It is as though fashion had emptied its entire cornucopia here.

And in this abundance of material the named women are in the midst of their work, but wholeheartedly and happily at it.

The noise of the city no longer gets this far but that does not mean it is quiet. The illustrators, woodcutters, engravers, and model makers fetch their assignments and instructions from the Editress-in-Chief, the fashion designers deliver the patterns they have produced following editorial directives, and young women bring handicraft also made according to instructions. In this room, they are corrected, debated in an adjacent one, and in a third, work is underway with the description of a new blouse with braided trimming. A dispatch is received from Paris stating that Monsieur A. or B. will not be able to finish a fashion drawing by the end of the week, and through the door that leads to the literary division, a man’s voice asks if Frau Veronica von G. has sent the fashion report.

However, despite all this activity there is an order and system to everything here.

To attest to it we wish to share the deepest editorial secrets with our readers and show you how an issue about handicraft comes into existence page by page.

It begins immediately with the most difficult: What are we going to present?

Once the originals for the objects of fashion and handicraft have been determined for the issue in preparation, they are distributed among our various illustrators. Numerous men and women artists, the best in their fields, are employed for the Bazar in Paris, Berlin, and Leipzig.

In regard to tasteful grouping and poses, graceful head positioning and postures, the French are the undisputed masters. On the other hand, our German artists are astonishing with precision and accuracy. It therefore goes without saying that the assignments are distributed on the basis of particular individual capabilities. It is not unusual for work to be shared, where one talent complements another. However, clarity is always the overriding purpose of our illustrations and the guiding principle is not just to produce a copy of the original, but to record (illustrate) it as a tutorial aid in the production of the object.

The artist may therefore not draw it in an arbitrary position but must consult with the specialist editor about how the object is to be oriented, from which side and position it is to be drawn, so that the reader is truly given a clear image and can comprehend the characteristics of the object in a single view.

This consideration of course also determines the size of the drawing. Affect is only a secondary concern.

When our readers examine our illustrations in this light they will understand that many many sketches have to be made and discarded before the representation is successful enough that one can work from the illustration.

Not just the characteristics of each fabric but also the type of handicraft must be studied and reproduced. One should be able to determine on first glance if the illustration shows a knitted or crocheted work. And all these minute details have to appear perfectly in the image, where no stitch can be omitted, and no square can be irregular. Every stroke clear and sure, none superfluous, and the entirety nonetheless not stiff but natural and effectually restrained.

Since the discussion and correction of the drawing requires continuous exchanges between the editors and the artists, several spaces in a side wing of the editorial office building have been been converted into ateliers. Twelve to fifteen illustrators work here an average of six hours daily. The number working in Leipzig and Paris is about the double. We stay in uninterrupted contact with the latter through our editorial branch in the French capital city.

The drawings are not done on paper but on inch-thick, flat-planed plates of boxwood, the surfaces of which are prepared with a fine lead white ground. As soon as a drawing is completed and approved by the editors, it is given to the woodcarver with notes about the material and anything about the object requiring particular attention.

The woodcarver’s task is described with few words. With a graver, he has to remove all of the white areas left by the illustrator, leaving intact all of the pencil strokes that are the actual drawing. The assignment is clear and concise but its execution is tedious, difficult, and accompanied by great responsibility. The drawing should lose none of its elegance and effect through the engraving, and even benefit from proper nuance. Corrections are only possible by drilling through an unsuccessful spot and inserting a fresh block that is drawn and engraved anew. The illustration is therefore fully at the mercy of, and even more dependent on, the skill of the woodcutter. The illustrator’s every intention is lost if the woodcutter’s graver cannot follow them.

An experienced woodcutter will often only be able to carve 10 cm per day from the drawing of a lace trimming, crocheted piece, or beadwork. This is followed by the time-consuming correction process, etc. The ceaseless efforts of thirty to forty woodcarvers are therefore necessary for a handicraft issue of the Bazar, totally disregarding each of the literary issues with drawings and woodcuts of great artistic value.

The layout, proof sheets, woodblocks and supplementary plates are then given to the printer.

There the next step is preparing the page proofs, eight single printed sheets with the text and illustrations in the prescribed layout. The editresses then read through all the instructions yet again, check them against the originals and return the proofs. This process is repeated a second time.

But when this is all done and completed, there is no vacation beckoning to the women, because in the meanwhile a new issue is already in preparation.

One thought on ““Der Bazar” — a 14th-anniversary retrospective”