Again counter to expectation, this is not found in a French publication, but in Dutch instructions from 1823 for a “hooked purse, in plain openwork crochet” (een gehekeld beursje, au crochet simple à jour). The first explicit mention of that craft in British publication is in instructions “for making a purse in double-stitch crochet” (pour faire une bourse à crochet à double maille), included in an anonymous compilation of knitting instructions from 1837. Those for the purse are in French but the book they appear in is otherwise entirely in English.

The first native English use of the loanword came in 1840. Six years later, the term “French crochet” was still being used to distinguish what is now termed the double crochet stitch (UK) from the “Shepherd or single crochet.” The latter is currently referred to as slip stitch crochet but the English authors of the day regarded it as a “species of knitting originally practiced by the peasants in Scotland” commonly termed shepherd’s knitting. Ironically, the oldest known description of this allegedly Scottish practice appeared in a French publication from 1785, and the earliest known French description of what the English texts call French crochet was published in 1848 (although earlier sources almost certainly remain to be uncovered).

The situation is similar with the simple Tunisian crochet stitch. Descriptions of it began to appear in European publications in the second half of the 1850s without either giving it a special name or claiming any novelty beyond its introduction in the fancywork press. When a veritable name-the-baby contest erupted at the end of the decade, the first names to appear in English venues included the French crochet à tricoter (crochet on a knitting needle; 1858) and tricot écossais (Scottish knitting; 1859). The first explicit mention of the Tunisian crochet stitch was Swedish (1857) — tuniska virkstygn (Tunisian crochet stitches) — without any francophone connotations. (Alternative derivations of the Swedish name have been suggested in comments on this post.)

The term next appears in the 8 June 1859 issue of the German periodical Der Bazar, retrospectively identifying the stitch that had been presented without a name a year earlier in the same publication as, “knitting using a crochet hook named ‘Der tunesische Häkelstich’ [Tunisian crochet stitch] or ‘tricot tunisien’ [Tunisian knitting], to distinguish it from the ordinary forms of crochet.” It was called for in numerous subsequent instructions in the same periodical.

Of particular relevance to the present discussion is one for a “Woolen crocheted collar” (Wollener gehäkelter Kragen) in the 23 January 1861 issue, with the middle section done in the simple Tunisian crochet stitch. 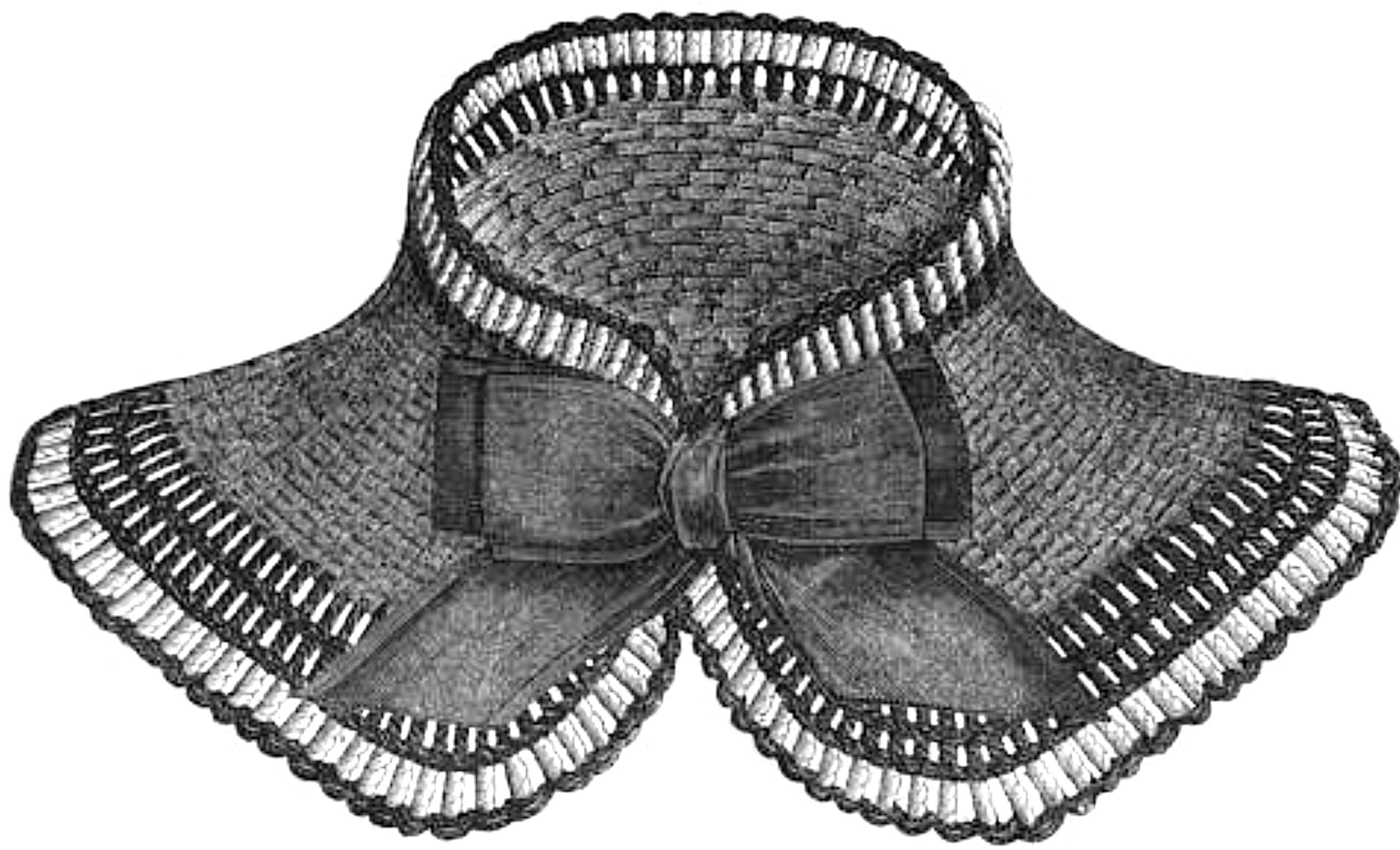 Der Bazar was a leading producer of illustrated fancywork instructions that were distributed to syndicated recipients in other countries two months prior to the German publication date. This enabled their translation in time for simultaneous release internationally. The participating French publication was La Mode Illustrée, where the instructions for this collar appeared in the 26 January 1861 issue.

The text is a direct translation of the German instructions, minus a remark in the original version about instructions for the stitch having been provided on numerous previous occasions. (La Mode Illustrée commenced publication in 1860; Der Bazar in 1855.) The image caption is also changed to “Knitted Pelerine Collar” (Col-Pèlerine Tricoté), despite the instructions following immediately below it being headed “Crocheted Pelerine Collar” (Col-Pèlerine au crochet).

Tunisia is associated with crochet in two native French publications from 1861. A commercial directory produced in Paris lists needle manufacturers, one of whom advertises both “aiguilles à tricoter” (knitting needles) and “crochets tunisiens” (Tunisian hooks), but no ordinary crochet hooks. Although the first name is obviously associated with the designated craft, the second is not.

It is certainly reasonable to assume that Tunisian hooks were used for Tunisian crochet. However, it should be noted that the French name for the craft in the Der Bazar instructions from January 1859 translates to Tunisian knitting not Tunisian crochet. Additionally, neither the translator nor the editor of the instructions in La Mode Illustrée appears to have been concerned about the reference to knitting in the image caption. It therefore seems as likely for the tool to have conferred the association with Tunisia on the craft, as the other way around. Whatever the thought behind it may have been, the needle manufacturer used the two labels to distinguish between knitting needles with smooth tips and those with hooked tips.

The latter form is explicitly prescribed for hand knitting in French instructions from 1817. This also notes the similarity between hook-tipped knitting needles and tambour embroidery needles, which are prescribed in the initial instructions for crochet in 1823, and numerous other sources. Just as tambour needles were used both for their nominal purpose and crochet, hook-tipped knitting needles were used both for knitting and crochet. (Despite their association with Tunisian crochet, there is ample evidence of long cylindrical hooks also being used for ordinary crochet.)

The second of the French texts from 1861 in which Crochet tunisien appears is an advertisement listing tutorial albums about various forms of fancywork. One is titled “Tunisian crochet with an explanation and method” (Crochet tunisien avec explic. et méthode). The album itself has thus far proven more elusive and it is possible that it was advertised as a planned publication.

Although certainly not the first text of its kind, the oldest narrative instructions for Tunisian crochet originating in France that I have yet located appear in the 6th edition of the Manuel des Journal des Demoiselles (Handbook of the Young Women’s Journal) from 1879. There is no bibliographic information to be found about any earlier edition but the parent Journal commenced publication in 1833. Nothing is said about the frequency with which the supplementary handbooks were released or the date of the first of them. In any case, the one from 1879 includes an illustration of the simple Tunisian crochet stitch on a Tunisian hook. 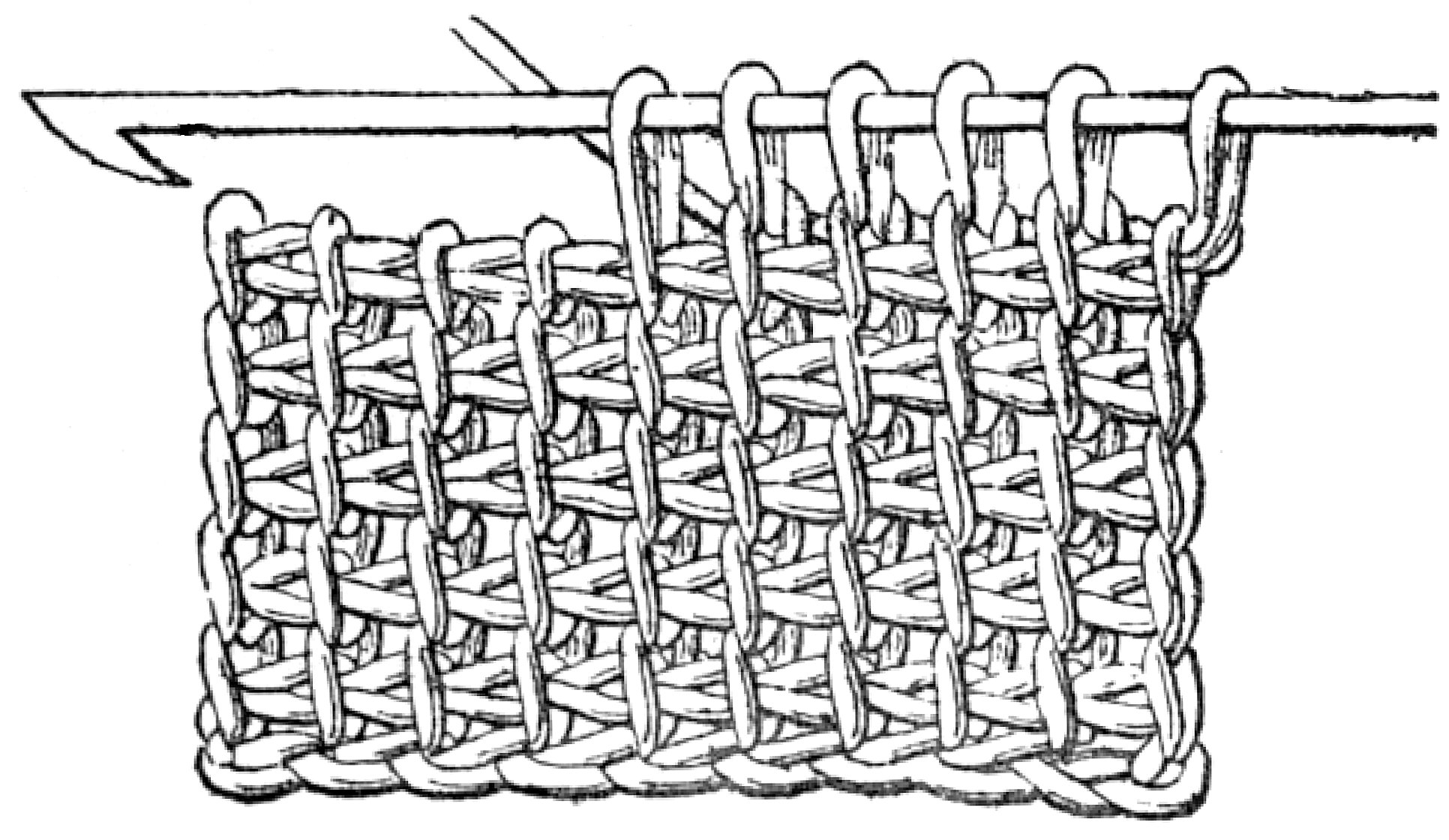 In addition to Tunisian crochet, it includes instructions for Astrakhan crochet, Egyptian crochet, and Russian crochet, without the vaguest suggestion of any actual association with the respective countries. On that basis, it can safely be concluded that the various French labels applied to the Tunisian crochet stitch in non-French publications were intended to evoke the cachet of Parisian fashionability, rather than designate anything with an actual Tunisian nexus.

This changes if, of the two alternatives noted above, the hook-tipped knitting needles labeled crochets tunisiens are seen as the link to Tunisia. France had clearer ties to the eponymous nation in the mid-19th century than did any of the other countries mentioned above. Tunisia in turn, lies on the route between Egypt and the Iberian Peninsula that early knitting with hook tipped needles is initially believed to have traversed, and remained in practice along that path.

Although conjectural, this may provide a substantive basis for hook-tipped knitting needles being termed crochets tunisiens. The step from there to the looped craft inheriting the same name is no different from the one taken when ordinary crochet was named after the French word for hook.

Tunisian or Afghan Crochet – All You Always Wanted To Know

[…] The first references to Tunisian crochet date back to the 1850s in England, Germany, and France, but also in Sweden and in the Netherlands (see the Loopholes Blog‘s article here). […]