I’m eager to spend some time away from 19th-century fancywork and am going to wrap up its discussion for now with a French description of purse making on a round knitting loom. It appears in Élisabeth Bayle-Mouillard’s Manuel des Demoiselles ou Arts et Métiers (Young Ladies’ Handbook or Arts and Crafts) from 1826, where the instructions for the French simple looped purse are also given. This leaves a number of European purses in the queue and I’ll get back to them after expanding the geographical and chronological scope of this blog.

There is no significant difference between these instructions and those for the Queen Elisabeth purse from 1823 with regard to the loom itself. However, the French description of how stitches are formed on that device differs in a potentially significant regard. Instead of being worked on the peg, the stitches are worked on the hook. The distinction does not appear to be purely semantic, but as the French instructions are not as detailed, there is latitude for interpretation.

The remark about loom-knit fabric being “ordinarily very loose” suggests what loom knitters now term e-wrap (i. e. twisted-loop) stitching. This is the loosest of the knit stitches produced on a loom and doubtless how the initial row of Bayle-Mouillard’s purse is formed. However, her instructions then prescribe: “For the second row, take a hooked needle…insert it into the first loop. Then turn the silk on this hook to form a new loop…” This can be read as a description of the “true knit stitch,” which is the full loom-knitted equivalent to open stitch knitting on needles. It is the sole means for using a peg loom to produce what can be characterized as loose open stitch fabric.

The instructions for the decorative eyelets (les trous dits à crochets) are similarly insufficient for determining their structure, although they are explicitly worked on the hook and not the peg. Other references to them in the Manuel add a bit more information. Piecing it all together suggests that they may be the picot in the current loom knitting repertoire. The 1826 instructions are nonetheless too terse to enable the eyelets to be made on their basis and it is also possible that they resemble what is now called the “drop stitch.”

If Bayle-Mouillard’s hooked needle was a true hook rather than a needle bent at an obtuse angle (as described in the 1823 instructions), it could presumably have been used to form the eyelets in a more crochet-like manner. It is not clear if she intended it for use in that regard, but a hook illustrated (free from its “wooden handle”) in a chapter on passementerie is well-suited to the all the details of loom knitting she describes.

I’ve translated the French term nœud-coulant as ‘loop’ although it is more literally a slip knot. It can be read as such at some points in the original text but at others it can only mean a loop. Since the latter reading is otherwise appropriate throughout, I’ve used it consistently. Here are the full instructions.

Knitting on a crochet is not only for purses but serves for all other objects, as with ordinary knitting. It is restricted to closed-work stitches that are lifted from the top of a round mold made for the purpose (which some people call a moule turc). It is fitted with pegs that hold the stitches while they are worked with a hook that resembles a tambour needle. You can start a length of knitting by fastening it to one of the points on this round mold. This sort of knitting is ordinarily very loose. It is now rarely used for purses but we will still discuss it in regard to them.

Take a circular boxwood mold fitted with closely set pegs. It does not shape the purse as do the cup molds used for simple looped purses. It therefore begins to taper a fraction of an inch from the top and its tail end is half as wide as the upper opening. The number of stitches is initially determined by the pegs but will be fewer at the end as a result of decreases in the stitching. 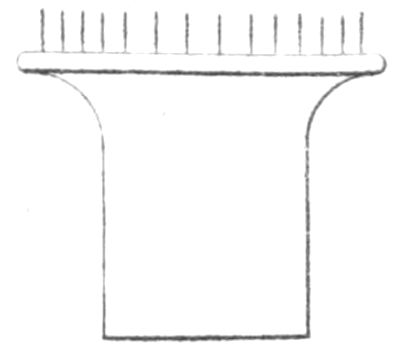 The stitches are mounted on the pegs by placing one loop around each. For the second row, take a hooked needle mounted in a small handle of boxwood or ivory for convenience, and insert it into the first loop. Then turn the silk on this hook to form a new loop, much as a single needle is used for stitching a heel. Continue this looping until you reach the point where you want your purse to narrow. You will see that the number of decreases needed depends on the pattern. A decrease is made by working two stitches into one with the hook.

You can vary the color from round to round in your purse as discussed for netting. You can also make so-called à crochet eyelets by wrapping the silk around the hook twice before inserting it into the previous loop, which produces a solid stitch. However, when working the needle through these longer or heavier stitches it is necessary to use a mesh gauge as is done when making a row of ordinary netting. Before or after each such round, insert the hook into the long stitches produced by the double wrap or on a mesh gauge and resume the knitting. This is all the variety these purses are likely to need. It is also possible to use silk as it is prepared for net purses.