The second of the named purses in the 1823 volume of Penélope is made on a circular peg loom. The instructions for it refer to techniques that are described in the preceding volume, which in turn refer to other instructions there. Merging these cascading fragments into a single text (as in the following translation) gives directions for producing fabric with an open-loop knitted structure. The described technique remains fundamental to loom knitting and is currently termed the flat stitch, here with an e-wrap cast-on. When worked with inelastic thread, the fabric displays prominent laddering.

A purse in the style of the Queen Elisabeth 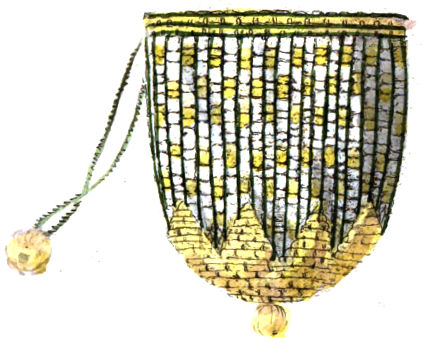 This requires a second mold as shown in fig. b, made of boxwood and fitted along the top with 44 small pegs that point slightly outwards. Since these break easily, it is better to replace them with copper or steel. 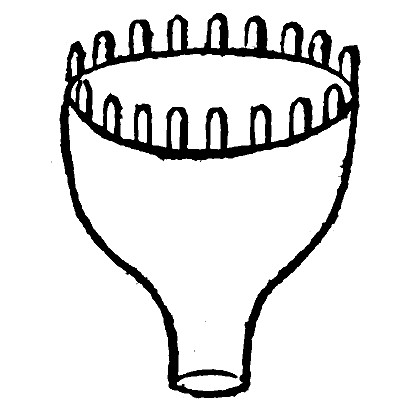 Fasten the thread to a peg and then lead it behind the next peg in counter-clockwise order. Wrap it loosely around the front of that peg and then behind the following peg, and so forth until a loop has been wrapped around each peg. Bring the thread through the space between the first and last pegs and place it on top of the loop on the first peg. Now take a bone or steel pin that is somewhat bent at its tip and lift the loop over that thread and drop it behind the peg. Continuing in this manner, the fabric will fall automatically through the opening in the mold and need only a gentle stretch to assume the desired form.

The pegs should be very closely spaced. This works best with gold or silver [wrapped] thread, or for variety, gold thread and green silk, silver thread and blue silk, etc.