Élisabeth-Félicie Bayle-Mouillard (writing as Élisabeth Celnart), gave detailed instructions for using a cup mold to make simple looped purses in her Manuel des Demoiselles ou Art et Metiers published in Paris in 1826. They include general remarks about the tool and illustrate them with a specific purse. This has the same basic stitching pattern as the second variant of the Louisiana purse but is covered with a festoon decoration that isn’t found in any of the Dutch instructions. A few sentences in the text from 1826 were revised in later editions and the following translation merges them all.

It is intended to enable the adventurous reader to make the purse and therefore places greater value on clarity than on being rigorously literal. Two details still require separate mention. The one is that the shifting of the stitch pattern in alternate rows to support the festoon decoration in fig. 78 depends on the number of holes in the mold. The original instructions give a useful first approximation but additional tweaking can easily improve it. Also, the instructions emphasize that each block of lilac stitches is square. As with the 1823 instructions, allowance is made for achieving the intended shape by adjusting the number of stitches but nothing is said about the similar use of twisting. (On the basis of other observations I believe that loop-and-twist was an option that simply went without saying.)

Take a hollow wooden mold. This is a kind of box shaped like a purse, rounded at the end, with two circular rows of holes at the top where the start of the purse is fastened. These rows are spaced a few lines apart [one line = 1/12 inch] and their purpose is to make the purse shorter or longer. The holes are placed in small grooves and separated from each other at equal distances (fig. 77). 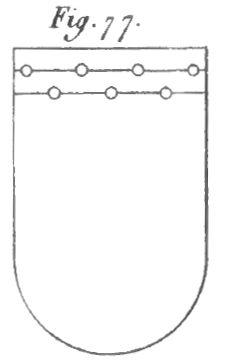 Because this is an old style purse, it is made either in silk and silver, or silk and gold, or gold and silver, or else with two threads of different colors, such as orange and green, blue and white, green and pink, etc. Since it is a mesh of small contrasting squares, the colors are normally matched to complement each other pleasantly. However many people use only one color or use so-called cordonnet thread.

Having chosen the colors of the silk (I will assume green and lilac for the purposes of this description), thread one large needle with the green, and another large needle with the lilac. Use four times the regular length of thread on the one needle this first time (let us assume it is the green but it does not matter which), and from then on double lengths. Take the needle with the green thread and tie its ends together with a good solid knot. Use your left thumb to press the knot into one of the holes in the mold, wrap the thread around it along the groove, and run the needle through the knot between the two strands. Pull this ring of thread tight and wrap it back in the opposite direction without loosening it. Redouble the circle three, four or five times, depending on the size of the thread. End the final round with a simple looped stitch and slide the needle behind it.

Then run a third thread through a hole in the mold. It is not important how this is done since this thread will be removed. Start by tying a knot in it that is too large to pass through the hole. Thread a needle with it and then pass it through the hole from the inside to the outside of the mold. Wrap it around the ring of silk threads from above to below and [return the needle through the hole to] secure all of them. Repeat this in each following hole until you have worked around the mold back to the starting point. Then stop and then cut the excess thread.

This first round will be a series of small lilac squares between the holes in the mold, with a curved bar of lilac thread crossing in front of the green stitches that separate the squares. The simple looped stitches in the following rounds will be worked inside [i.e. behind] these bars in the order already indicated; four in lilac between ten in green. It is no longer the holes in the mold but the lilac squares that guide you.

The second round is started by passing the green thread through a lilac square (concealing what would be a green bar). Then make five green simple looped stitches [under that square], then four lilac, then five green to form a new square, then five more green to make ten in all, and so on. The successive lilac squares are connected by curved bars that are joined with the following round (fig. 78). 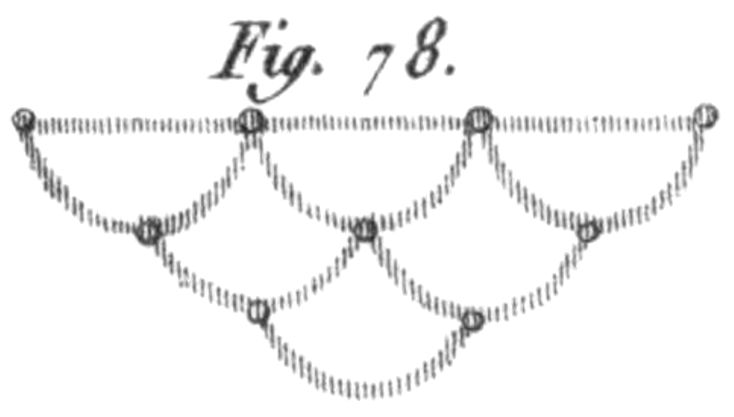 The entire mold is covered in this manner without changing the stitching procedure until the purse becomes a little too wide to follow the curvature of the mold. As soon as this is perceptible, gradually make the bars shorter. Decrease the number of stitches by two green and one lilac as you progress, and then even more. As you near the end this will become insufficient, and some adjacent pairs of lilac squares will need to be worked into one, underneath a corresponding square in the preceding round. This will alter the shape of the mesh but at the end this is not noticeable.

Pay attention to two things when making a purse with simple looped stitches. The first is to adjust the individual stitches so that the mesh is uniform with elements that are all the same size. Do this by tugging the middle of the previous stitch with the tip of the needle when you are about to make a new one. Then look closely to see if the thread runs on a straight line. Where it does not, tighten or loosen the stitch to make it so. Take care to make all stitches loosely enough to permit this sort of adjustment.

The second precaution regards the way a new length of thread is affixed to the one on the needle when it is almost depleted. Doing this badly can cause a number of problems. First, it can cause ugly disruptions in the flow of the mesh, which must always be even and flat. It will also stretch out of proportion and finally rupture if the join between the new and old threads fails. Make a so-called weaver’s knot to prevent this. [A lengthy description of it follows but is omitted here.]

Many people attach a new simple looped stitch to the small bar hidden in the lilac square but this distorts it and makes it heavy and coarse. Others incorrectly work the green silk into the lilac silk with visible stitches that produce a very disagreeable effect.

The number of stitches should not be calculated without considering the specific silk being used. For a mesh of a given size, more stitches will be required if the thread is thin. We calculated an average size, which is the one that is normally used. Fine silk requires too much time and makes large purses too stiff. Gold or silver wire abrades more quickly than silk does when worked into simple looped stitches and much shorter lengths of it are threaded onto the needle. It is of primary importance to keep the two working threads from knotting up or becoming entangled with each other.

When the purse is completed, cut the stitches that attach the first round to the mold, turn it upside down, and pull it free of the mold. If it is then lined, it is usually with satin that matches one of the silk colors but this is a matter of taste. Sew a tassel at the end, with gold or silver thread if these materials were used in the purse, and silk. Steel is even better if the purse is all in silk, especially if that metal is used for the clasp or chain. [Four general ways to close and fasten purses are then described but not included here.]