Several of the instructions discussed in earlier posts explicitly state that round purse molds were made of boxwood. This was widely preferred by the European woodturners of the day and therefore an obvious choice.

The 1823 instructions for the Louisiana purse provide detailed dimensions for a cup mold. They specify that this “turned boxwood mold … should be 7 centimeters in diameter ,” which was about the largest diameter boxwood that was then normally available to woodturners. It was obviously acceptable to the purse makers, as there were less restrictive alternatives. (The dwindling availability of larger diameter boxwood can be traced over the preceding centuries in categories of turned objects that are heavily represented in museum collections, such as woodwind musical instruments.)

The knitting loom used for the Queen Elisabeth purse in the same 1823 series was also described in detail, and subject to the constraint on the maximum diameter of turned boxwood. (It is worth noting that the two molds illustrated in this post’s banner are also similarly sized.) In consequence, the specified 1 cm interval between the 22 holes around the second row of the cup mold (7 cm diameter = 22 cm circumference) permits the determination of the spacing between the 44 pegs on the knitting loom. The simple looping associated with the former counts both the stitches anchored to the holes and those fixed to the lags between them, while the stitches on a knitting loom are counted on the pegs only.

Both tools therefore provide a 5 mm spacing between the attachment points. The alternating alignment of the simple loops with the guide holes and the lags intrinsically produces openwork. Conversely, the continuous vertical rows of cross-knit looping are directly amenable to closed work. The knitting loom cannot be used for simple looping but the cup mold can be used for both closed and openwork with equal ease. Nonetheless, the instructions for purses considered here use the cup mold exclusively for simple looping and don’t mention any other use. The peg loom is used in the same basic manner as it is in present-day loom knitting and the stitches described in the 1820s instructions remain in the loom knitter’s repertoire.

The source documents include interesting remarks about the growing obsolescence of purse-making using molds. The 1826 presentation of bourse au crochet made on “a circular boxwood mold fitted with closely set pegs” states:

“Knitting on a crochet is not only for purses but serves for all other objects, as with ordinary knitting … It is now rarely used for purses.”

The same volume includes a description of the cup mold that was extended in the 1830 edition to note that making purses on it was outmoded. The 1842 text accompanying the logo illustration applies this to both implements (presumably with specific reference to purse making):

“Since the introduction of crochet, however, these moulds have not been much used.”

Nonetheless, the 1890 edition of the Caulfeild and Saward Dictionary of Needlework includes the following entry:

“Purse Moulds:  There are two kinds of these moulds, which are made of ivory and wood; one is called a “Moule Turc,” and has small brass pins fixed round the edges of the largest circumference; the other is shaped like a thimble perforated with a double row of holes, like a band, round the open end, a little removed from the rim. Through these perforations the needle is passed, to secure the Purse to the Mould where the work is commenced.”

This is well past the date when 7 cm diameter boxwood had fallen out of commerce, to say nothing of similarly sized turnable ivory. Photos of 18th-century knitting looms made of both materials are reproduced in Mary Thomas’s Knitting Book from 1938; the ivory one mounted on horn, and the wooden one of an unspecified variety (although it is safe to assume that it is boxwood). 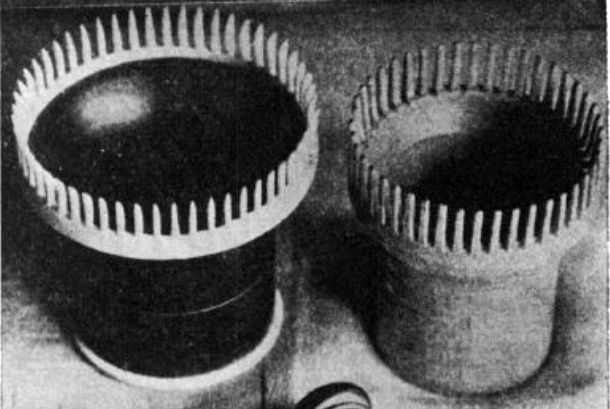 The summary indication of their dimensions (“the larger … being 3″ in height”) places the diameter of the latter at about 7 cm. It also has 44 pegs and thus instantiates the pegged purse mold described in 1823.

The 1890 dictionary entry may primarily have been retrospective, but if it did describe contemporary practice, the forced limit on the maximum size of purses made on such molds would no longer have been applicable. Knitting looms are currently available with the 5 mm pitch that appears to have been something of a standard. They are marketed as “extra fine gauge” with varying peg counts, and adjustable ones permit experimentation exactly at the 44 peg ‘boxwood limit.’