One of the recurring topics in the discussion of Tunisian crochet is whether fabric produced with a double-ended hook should be regarded as a variant form of ordinary Tunisian crochet or as an entity of its own. The earliest instructions calling for that tool that I have been able to locate so far are in the 10 February 1896 issue of the German craft periodical Der Bazar. This is eight years before similar instructions appeared in the US publication Columbia Book of the Use of Yarns, detailed in a previous post.

The stitch dictionary in the 8th edition of the Columbia Book, from 1907, includes a Double Hook Afghan Stitch. 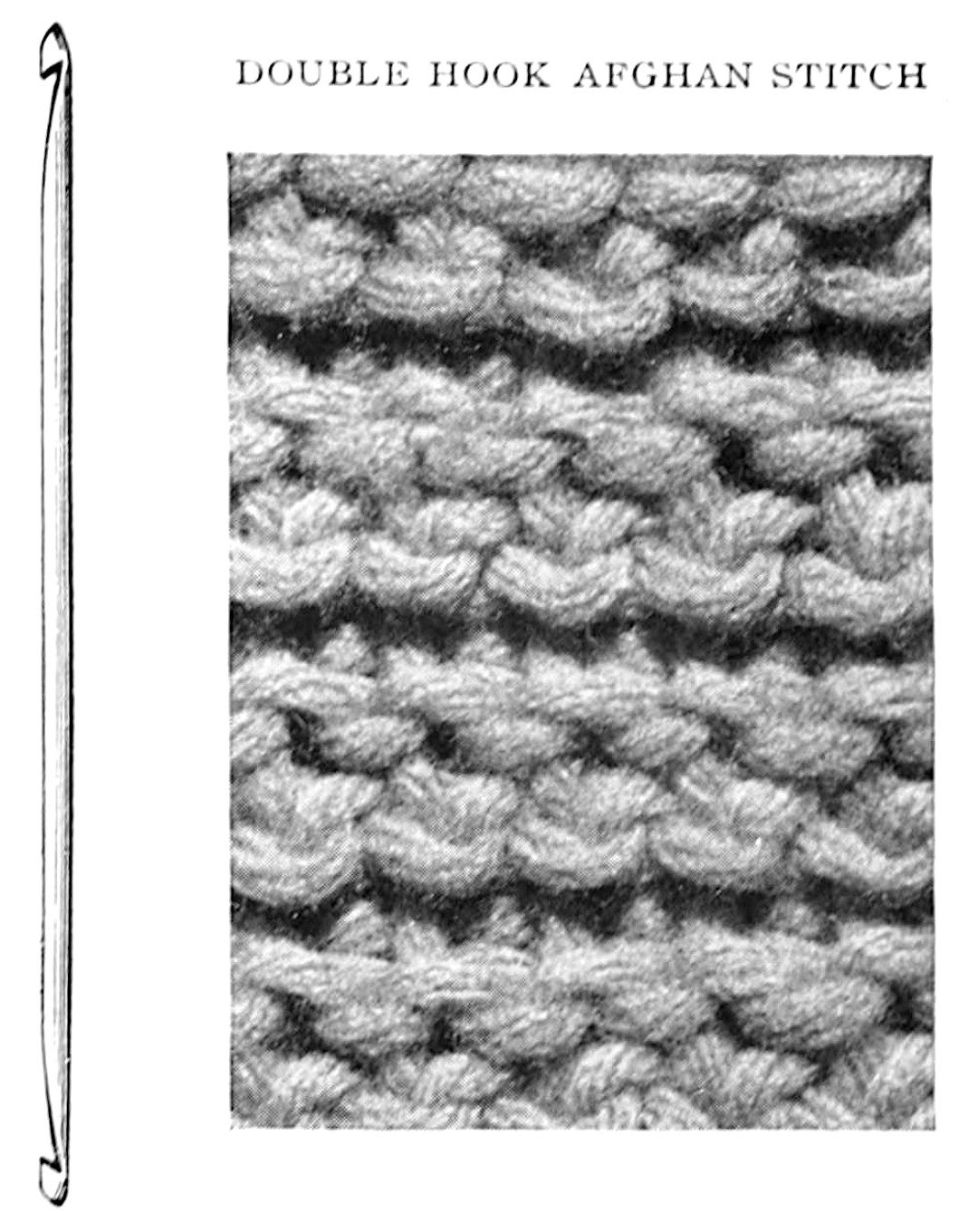 Third Row—With the same hook take the stitches up again.

Fourth Row—Turn the work, taking them off with the other hook. Repeat 3d and 4th rows alternately for all the work.”

With the exception of the hook and fabric being turned at the end of each forward pass, with a resulting need for a second strand of yarn, this stitch is worked the same way the Tunisian simple stitch (TSS) is. Both strands can also be taken from the opposite ends of a single ball of yarn (as done in twined knitting), just as the two hooks are on opposite ends of the same shaft. Using separate yarn sources additionally enables colorwork but that is also true of single-hook TSS.

The appearance and texture of the ribbed double-hook fabric differ markedly from ordinary TSS. The prominent horizontal chains characteristic of the latter are concealed entirely, although again, the same applies to many single-hook variants. There are additional double-hook variants that relate similarly to other single-hook forms. If a categorical distinction is to be made between them, the double-hook qualifier first noted in the 1907 pattern provides a good basis for it.

The double hook also makes it possible to work TSS in the round. Here, the ends of a foundation chain are joined and a new loop is worked into each of the loops in that chain for as long as the straight hook comfortably permits. The work is then turned and the other end of the hook used to return a chain through all but the last few of the pending stitches, using a separate strand of yarn. The work is turned again and the forward round is resumed.

The enclosed chains are oriented in the opposite direction from those in flatwork TSS but the two forms are structurally identical. The details of the loops in a TSS chain that indicate the direction in which it was worked are often obscured by the vertical loops, with the exposed edges of the chain loops appearing as parallel horizontal lines in both cases. The difference can be seen on closer examination, but whatever significance it may have, it provides little justification for a categorical distinction between chained-toward-the-right and chained-toward-the-left TSS variants. Since Tunisian crochet stitches can only be worked in the round with a double-ended hook, the single/double hook attribute is superfluous in the labeling of such fabric.

There is an intermediate aspect to the instructions for producing the Tunisian stitch variant using two separate hooks that appeared in Der Bazar in 1862 (discussed here). Taken with the earliest mention of any form of Tunisian crochet being from 1858, it seems unlikely that references to the double hook before the final decade or two of the 19th century remain to be discovered in the fancywork literature.

This still leaves a question about when in the 20th century (assuming no surprises) the first instructions for using that tool for work in the round appeared. The Columbia Yarn Company added celluloid to the materials in their listing of hooks and needles in 1908, also offering double-ended crochet hooks under their own heading for the first time. 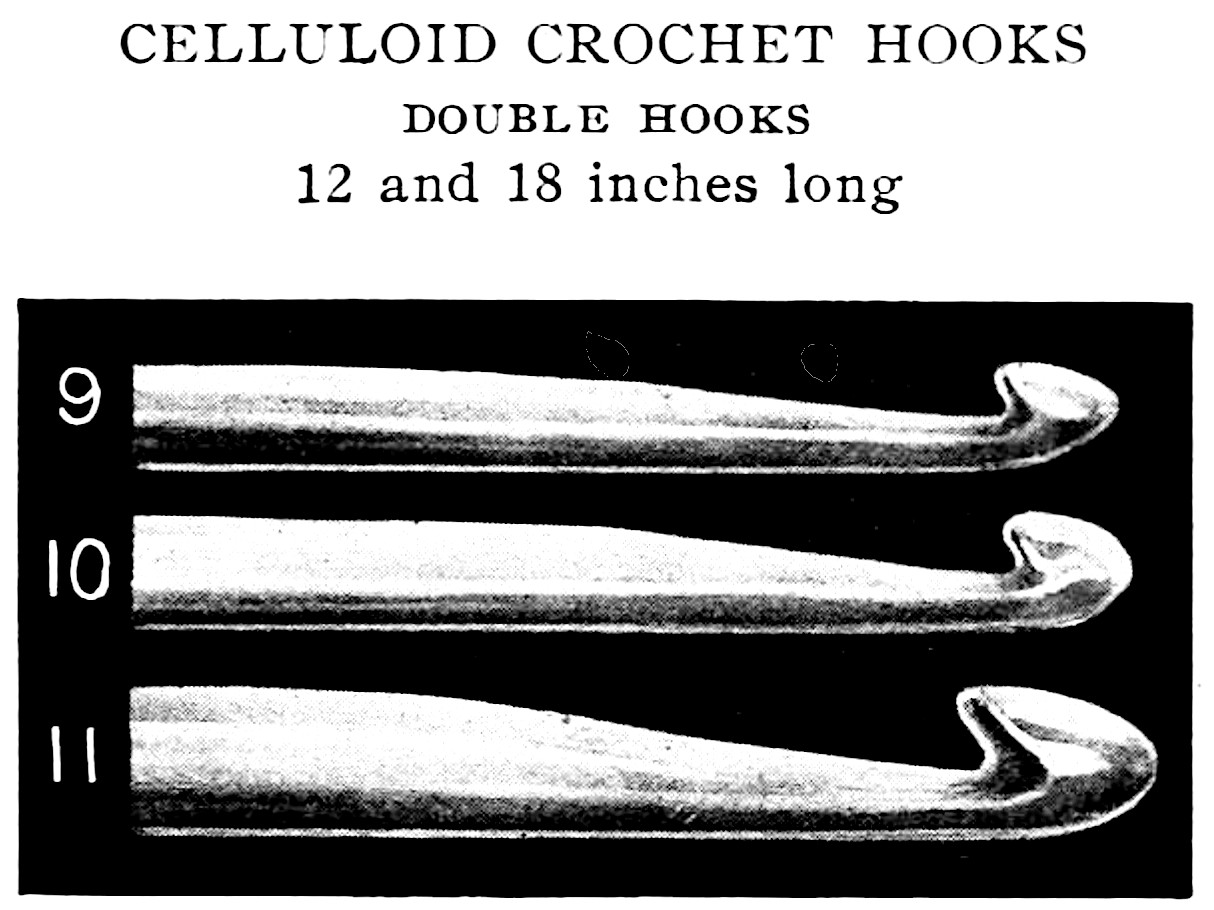 However, the 1904 instructions linked to above explicitly prescribe a “Wooden Double End Crochet Hook, 20 in., No. 13.” The industrial production of such tools had therefore commenced prior to their availability in celluloid. Nonetheless, as of the 19th ed. from 1918, where the Double Hook Afghan Stitch also appears, the Columbia Book still only uses the requisite hook for flatwork.

Although this suggests a later advent of TSS worked in the round, countless similar publications remain to be examined before any date can safely be placed on its first appearance in print. Present-day Tunisian crocheters are familiar with its comparatively recent proprietary manifestations but the initial use of the double hook is not part of the general craft lore.

The 10 February 1896 issue of Der Bazar includes instructions for a child’s cradle cover made in alternating bands of shell stitch (Muschenstreifen) in ordinary crochet and TSS ribbing (Rippenstreifen). Both are worked with the same double-ended hook, as is the elaborate border. The ribbing has a more complex form than that discussed above, and uses different color yarns to good effect. (Fabric worked entirely with it is also fully reversible.) 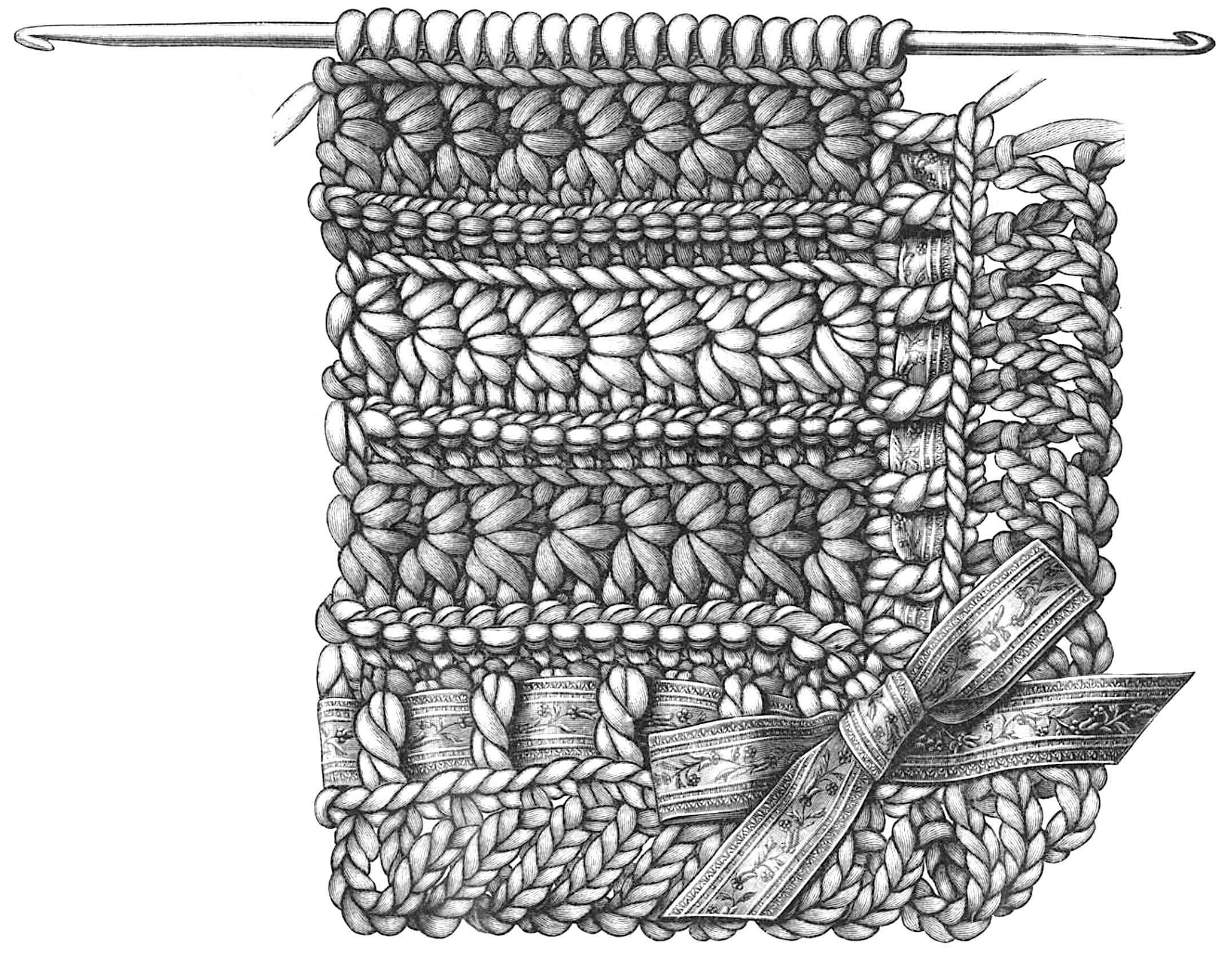 The illustration is presented in the immaculate detail that is a hallmark of Der Bazar (where the first explicit reference to the “Tunisian crochet stitch” appeared, as discussed here.) The written instructions, however, are atypically difficult to follow. Those for the ribbing are clear enough and describe a variant that remains in the current repertoire. The instructions for the shell stitching are more opaque and I haven’t quite puzzled out how they lead to the illustrated structure well enough to be able to provide a useful but objective translation. In any case, these shells are not intrinsically dependent on a long hook, much less a double-ended one, and lie outside the scope of the present post anyway. The following text therefore stops at the end of the instructions for the ribbing.

“The pretty cover is made with white and blue woolen yarn singles [Dochtwolle] in a variant of the Tunisian crochet stitch, together with a shell pattern, using a heavy wooden needle that has a hook at both ends. It is worked on a white foundation row of appropriate length and an even number of stitches, as follows:

1st pattern row: forward. With a loop of the blue yarn around the hook, skip the first chain and draw one loop through each of the remaining chains. Turn the work and return using the other end of the hook with the white yarn to close the stitches one after the other.

2nd pattern row: forward. With the blue yarn (the active yarn is always led through the first loop) skip over a stitch and draw a loop through both the next vertical bar and horizontal chain together. Having worked through each stitch in this manner, return as in the first pattern row.”

The use of a long double-ended hook both for stitches that require one, and those that could as easily be worked on a conventional short crochet hook, is interesting in itself. There is a surprising amount of additional evidence of the mid-19th-century use of long hooks for ordinary crochet. Such hooks were manufactured with both cylindrical and tapered shafts, so there was more to it than a simple matter of some workers preferring Tunisian hooks where they were not a necessity.

The entire discussion here is restricted to evidence found in the context of fancywork. An earlier post considered the relationship between Tunisian crochet as an urban practice in Sweden and its rural counterpart krokning (hooking). It remains unclear whether this is just a matter of alternate nomenclature or if krokning has roots that predate the emergence of Tunisian crochet in the craft literature. For now, it is sufficient to note that the use of a double-ended hook for TSS in the round is a mainstay of the former craft as it is currently practiced.